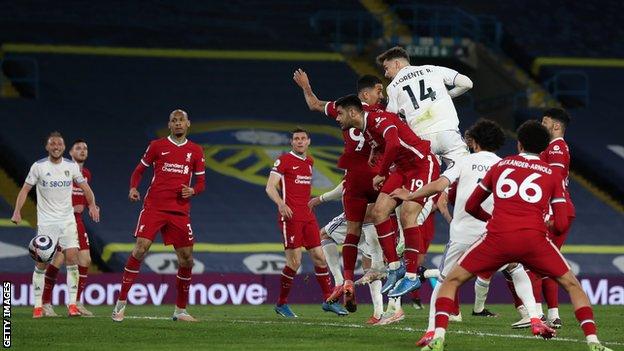 Diego Llorente scored a late equaliser for Leeds to deny Liverpool a place in the top four of the Premier League – as uncertainty reigns over what that would mean following the announcement of the European Super League.

The Reds are one of 12 clubs to agree to join a breakaway ESL to “commence as soon as practicable”. Even if it does not start next season, Uefa has said it could ban the clubs – including six English sides – from European competition for their defection.

There was a strange mood around the first game involving any of the 12 teams since Sunday night’s announcement, with protests inside and outside the ground.

Fans of Leeds and other clubs gathered outside Elland Road to stage a protest – during which a Liverpool shirt was burned – and a plane flew over the stadium displaying an anti-Super League message.

Inside the stadium Leeds players wore T-shirts saying ‘Earn it’ next to the Champions League logo and ‘Football is for the fans’. A banner behind one goal had the same message.

Leeds left the shirts in Liverpool’s dressing room too, in case they wanted to protest – a move that annoyed Reds boss Jurgen Klopp, who said he does not like the idea of the ESL but that he and his players had no say in it.

Liverpool dominated the first half and went ahead when Trent Alexander-Arnold latched on to Diogo Jota’s fine pass and squared it to Sadio Mane to slot into an empty net after Illan Meslier had rushed out of goal.

That was his first Premier League goal since January, a run of 10 games.

Leeds improved after the break and Patrick Bamford hit the crossbar before Llorente headed in his first goal for the club.

Liverpool stay sixth after this result. Were they to occupy that position at the end of the season, they would not even finish in a European place, unless one of the domestic cup winners also finish in the top five.

But if the Super League does happen, the Reds would no longer need to worry about such things.

Liverpool were the dominant force in the first half especially, with Thiago Alcantara forcing a save from distance and Roberto Firmino shooting straight at Meslier before the goal.

Leeds battled back in the second half but Liverpool had two great chances to win it – shortly before the equaliser when substitute Mohamed Salah dragged a shot wide and then in the final minute when Alex Oxlade-Chamberlain was denied by Meslier.

Liverpool’s immediate future, though, is more likely to be decided off the pitch, rather than in a game at Elland Road against an English side not in the ‘big six’.

Leeds followed up last weekend’s victory over champions-elect Manchester City with a dramatic draw against the title holders. Next up is old rivals Manchester United as they navigate a sequence of testing fixtures.

The hosts were not at their busy best in the first half – although Bamford was denied by Alisson after some poor goalkeeping – but they dramatically improved after the break.

Bamford clipped a clever first-time shot over Alisson that came off the crossbar, and Jack Harrison was denied by the goalkeeper at his near post.

Leeds got the goal they deserved when Llorente nodded in Harrison’s corner for a first goal in English football.

United sit 10th in the Premier League, eight points behind the automatic European places. Although if six teams above them suddenly became ineligible, they would be in the Champions League spots.

Liverpool host Newcastle in the early Saturday game (12:30 BST), while Leeds’ tough run continues with a home game against Manchester United at 14:00 the following day.