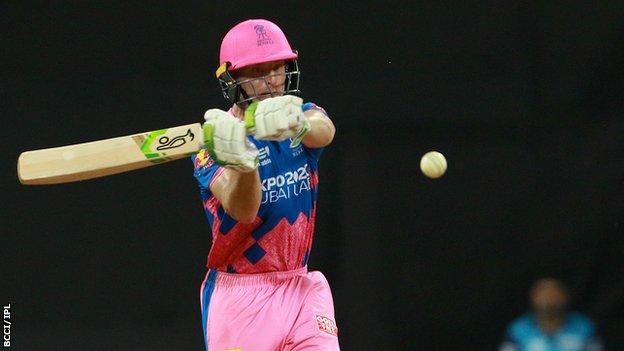 Chennai posted 188-9, with Faf du Plessis top-scoring with 33 while Moeen made 26 and Curran 13 from six balls.

Curran then removed Manan Vohra and Sanju Samson in the six-over powerplay.

While no Chennai batsman made a match-winning contribution of their own, six batsman made 18-plus, and they hit 10 sixes to reach a score that was 10 runs above par at the Wankhede Stadium in Mumbai so far this season.

They lost regular wickets, but Moeen’s hitting over mid-wicket, alongside Ambati Rayudu’s 17-ball 27 and Dwayne Bravo’s 20 off eight balls helped their innings maintain momentum throughout.

Left-arm seamer Chetan Sakariya impressed in taking 3-36 for Rajasthan, including the key wickets of Rayudu and MS Dhoni, while Chris Morris – the most expensive singing in this year’s auction at £1.6m – took 2-33.

Rajasthan were well set, with Jos Buttler going nicely, when the ball was changed after the England wicketkeeper hit Jadeja over mid-wicket for for his second six.

The replacement ball, which was dryer than the old one because of the evening dew, brought some grip and turn for Jadeja as he bowled Buttler for 49.

That sparked a collapse of five wickets for just eight runs in 21 balls.

Jadeja and Moeen – who joined Chennai from Royal Challengers Bangalore this season – had Shivam Dube and David Miller trapped lbw respectively, before the England off-spinner saw Riyan Parag and Morris caught on the mid-wicket boundary.

Chennai move up to second – behind Royal Challengers Bangalore, who are the only side with a 100% record so far – while Rajasthan stay in mid-table.