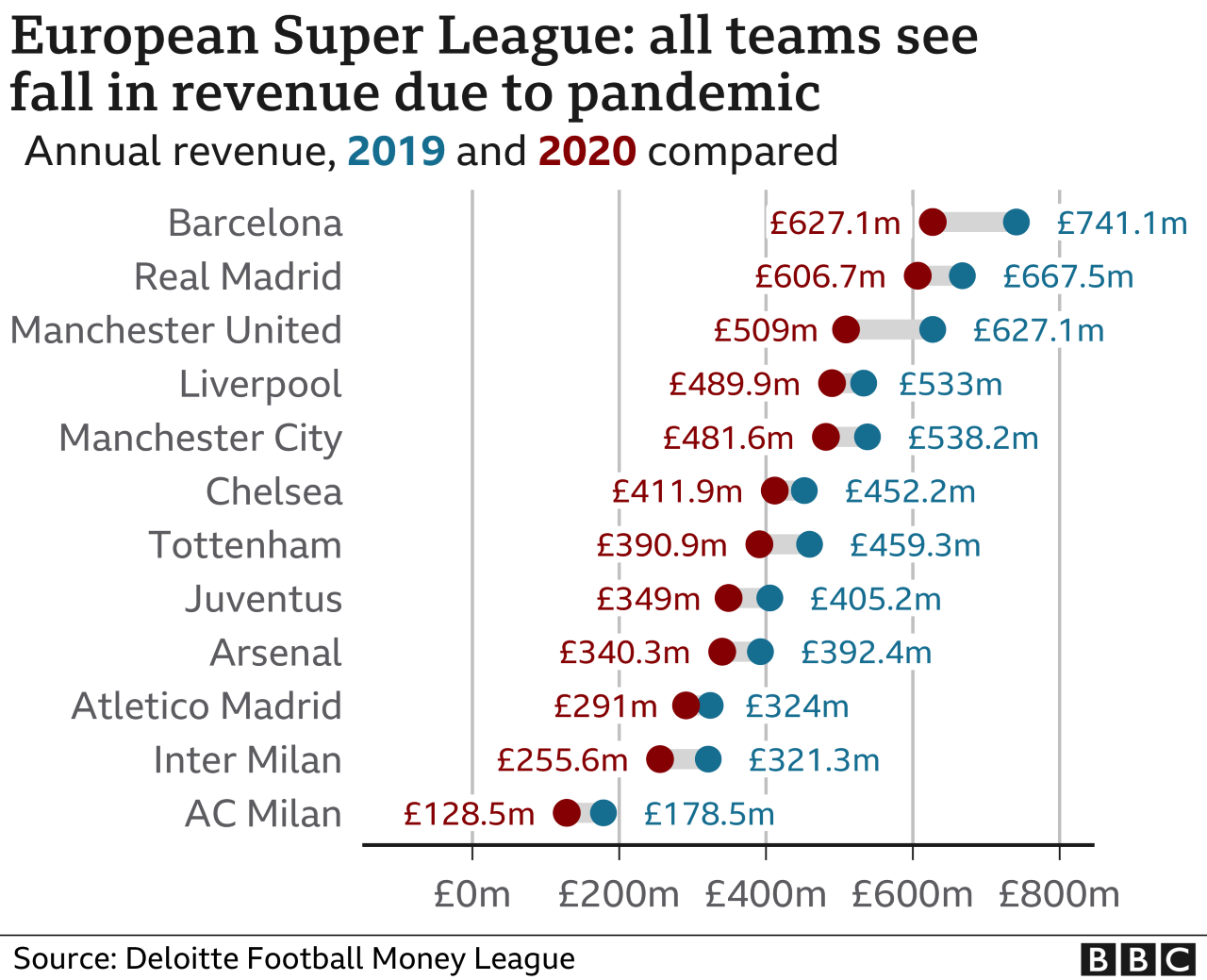 The government will take “whatever action necessary”, including legislative options, to stop plans for a European Super League, No 10 says.

Following the PM’s meeting with the FA and Premier League officials, and fans’ representatives, Downing Street said: “No action is off the table.”

The 12 founding members of the league faced a fierce backlash after unveiling proposals for a breakaway tournament.

One of these, Real Madrid, insisted they were doing it to “save football”.

Club president Florentino Perez said the decision to create the new league was in part taken because “young people are no longer interested” in the game.

But fans and pundits have expressed fury at what they say would be an unfair competition that would lock many teams out of top European football.

The proposed league, which has been described as a football “closed shop” by a government minister, has united MPs from every party against it.

The plans revealed on Sunday that the 12 founding football clubs would be permanent members and never face relegation.

Critics say the new league could supplant the existing Champions League and disrupt the current football “pyramid” that sees teams rise or fall on merit.

Downing Street said the prime minister told his meeting with FA and Premier League officials that the government “will not stand by while a small handful of owners create a closed shop”.

Boris Johnson reiterated his “unwavering support for the football authorities and confirmed they have the government’s full backing to take whatever action necessary to put a stop to these plans”, a statement said.

He also made it clear “that no action is off the table and the government is exploring every possibility, including legislative options, to ensure these proposals are stopped”.

Writing in the Sun, the prime minister said he was “horrified” at the implications for clubs across the country.

In a direct message to fans, he said: “It is your game – and you can rest assured that I’m going to do everything I can to give this ludicrous plan a straight red.”

Former England captain Alan Shearer told BBC Breakfast the six English clubs should be expelled from the Premier League, which they have said they aim to remain in while also playing in the European Super League.

“It’s not right what they are doing, it’s not competitive, it’s a closed shop – you can’t have a competition where no one else is allowed in,” he said.

“You can hear, feel and see the anger from almost everyone in football.”

Chairman of the Commons’ Digital, Culture, Media and Sport Committee Julian Knight, said restricting work visas for footballers who play in the proposed ESL could be one way the government could pull levers to stop the league going ahead.

Speaking to the BBC, he said other options were a windfall tax on clubs and long-term reform giving fans much greater power on football club boards.

The former chair of the committee, Damian Collins, described the Super League as a “cartel” and called for a new football regulator that could “protect the integrity of competitions and also to ensure that clubs are being run in a sustainable way”.

Labour’s shadow sports minister Alison McGovern urged the UK’s competitions watchdog to investigate, describing the plans as “nothing short of an attempt to stitch up competition for a few elite clubs at the top”.

And on Monday, the Duke of Cambridge, who is president of the Football Association, said he shared fans’ concerns about “the damage it risks causing to the game we love”.

The 14 Premier League clubs not participating in the new venture are also due to discuss their response later.

“The backlash is understandable and deserved,” the club said.

“We urge them all to consider what they wish their legacy to be.”

Meanwhile, the president of European football’s governing body Uefa, Aleksander Ceferin, warned players who play for teams in the ESL that they would be “banned from the World Cup and the Euros”.

“If some elect to go their own way, they must live with the consequences of their choice. They are responsible for their choice completely. This means you are either in or you are out. You cannot be half in and half out.”

Sky Sports confirmed it had not “not been involved in any discussions” about the breakaway league.

“We are completely focused on supporting our long term football partners in the UK and in Europe,” the broadcaster said.

UK watchdog the Competition and Markets Authority said it was a “complex area” but it will be “carefully considering any competition aspects of these proposals”.

How would the European Super League work?

On Monday, Culture Secretary Oliver Dowden said if football authorities could not prevent English clubs from joining the ESL, the government would do “whatever it takes” to protect the national game.

He added club owners “should remember that they are only temporary custodians of these clubs and that they forget fans at their peril”.

Kevin Miles, chief executive of the Football Supporters’ Association, said the new league “smashes that dream” for a fan of their team being promoted.

Speaking to BBC Newscast, Mr Miles said the government “could make life very difficult” for participating clubs: “There’s tax exemptions, all sorts of things that these elite clubs enjoy, that government could interfere with.”

There were protests outside grounds around the country on Monday, with fans of both Liverpool and Leeds gathered outside the Yorkshire club’s Elland Road stadium before their evening fixture.

Leeds players wore T-shirts saying “Earn it” next to the Champions League logo and “Football is for the fans” and left the shirts in Liverpool’s dressing room in case they wanted to join the protest.

A plane also flew overhead with a banner saying: “Say No To Super League.”