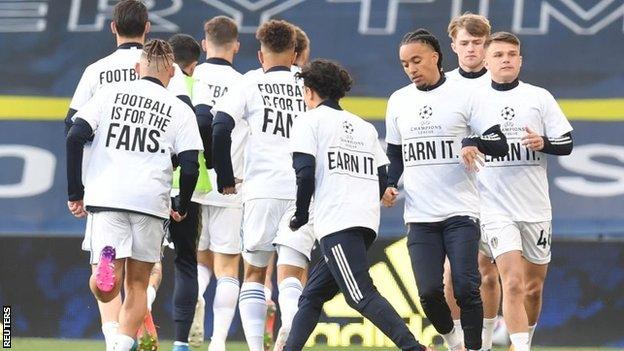 Liverpool manager Jurgen Klopp remains opposed to the idea of a European Super League despite his club agreeing to join it.

In 2019 Klopp told Kicker he hoped there would never be a Super League.

Asked about the plan by Sky Sports before the Premier League game with Leeds, he said: “My feelings didn’t change. My opinion didn’t change.”

Fans of several clubs protested outside Elland Road – including burning a Liverpool shirt – while Reds fans displayed banners opposing the move at Anfield.

A plane flew over Leeds’ ground saying ‘No to Super League’ and United players wore T-shirts saying ‘Earn it’ next to the Champions League logo and ‘Football is for the fans’.

Uefa president Aleksander Ceferin has said clubs and players involved with the ESL could be banned “as soon as possible” from all Uefa competitions – and the World Cup.

Klopp continued: “People are not happy with it, I can understand it. I can’t say a lot more because we were not involved in the process – not the players, not me – we didn’t know about it. We will have to wait how it develops.

“I like the competitive aspect of football. I like that West Ham might play in the Champions League. I don’t want them to, because we want to, but I like they have the chance.”

Klopp said he did not want his players to be blamed for a boardroom decision.

“I’ve heard a few things but what I really don’t like, Liverpool Football Club is much more than some decisions,” he said.

“The most important part of football are the supporters and the team. We have to make sure nothing gets between that. I’ve heard there are banners but the players didn’t do anything wrong. We have to all stick together.”

“The fundamental problem is the rich always aspire to be more rich without considering the consequences for the rest. As they gain more power they start demanding more privilege over the rest,” he said.

“What makes competition great is the possibility for one of those weak teams to develop, not the big teams playing each other.”

PFA chief executive Gordon Taylor said the Super League idea had been mooted for some time but was “the last thing the game needs”.

“It is a little bit of a ticking time bomb that we have,” Taylor told BBC Sport. “You have renegade members who run riot. That causes a massive problem for the vast majority of clubs or you look to try and control it.

“It is a real test for Uefa, Fifa and our Football Association and also it is something that you need to be able to win over, because we are an entertainment industry, the players are important as are the fans and you can’t just have a cavalier attitude and ignore it, or it will come back and bite you.”

Former Manchester City defender Micah Richards told BBC Radio 5 Live said despite holding a position as an ambassador at the club “the first word that came to me was disgrace”.

“Now, having the audacity to believe they should be better than everyone else – I was flabbergasted.”

Ex-Arsenal striker Ian Wright said he could not believe his former club was one of those involved in the ESL move. “This is the same Arsenal that only a couple of weeks ago was commended for the tribute to David Rocastle,” Wright said in a video on Twitter.

“God, the man would be turning in his grave knowing what is going on now. Is this how far we have fallen?

“That we are getting into competitions because we are not good enough to get into them, so at the detriment of the English game we are getting a seat at the table we have no right to be at.”

Former Blackburn and Chelsea striker Chris Sutton added on 5 Live: “It’s deeply unfair for the players at Liverpool and on Jurgen Klopp as a manager and all the other clubs.

“The owners have made their beds and have to come out and explain and front up to the fans and they have not done that – it’s shocking. This is going to turn very ugly.

“These clubs have an obligation to their country. I love the league format, if clubs leave the English league it will kill the game as a spectacle.

“The Champions League will be watered down. It’s going to be a Champions League B competition. What will happen to the Merseyside derby? Liverpool have just crushed Everton. They’re killing the game.”