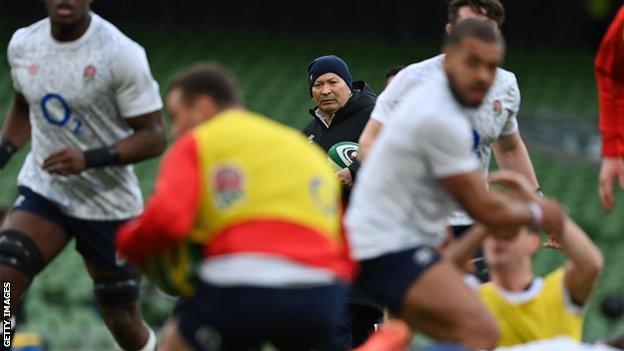 Eddie Jones has been backed to continue as England head coach following a review into the team’s disappointing fifth-place finish in the Six Nations.

Jones’ position had been under scrutiny since defeats by Ireland, Wales and Scotland in the same tournament for the first time in 45 years.

“The debrief was a valuable process, we all learned a lot,” Jones said.

“Most importantly, we have identified actions to enable the team to move forward positively towards 2023.”

The panel reviewing England’s performance consisted of “RFU board members, executives and independent experts”, while past and present players – as well as the coaches – also gave their feedback.

The RFU says the overall response from the players was “positive and supportive” and there were a “number of contributing factors” that led to England’s poor campaign.

Among them was the absence from the coaching team of Jason Ryles and Neil Craig, who were both unable to travel because of the Covid pandemic. Forwards coach Matt Proudfoot missed the start of the training camp after testing positive for the virus while Jones himself was also forced to self-isolate.

The RFU also admits a number of players – especially those from Saracens – “did not have enough game time going into the Six Nations”, while other players were overly-fatigued after back-to-back seasons.

The review also concluded England’s stringent coronavirus protocols, which they say were “in some cases greater than other unions”, had a detrimental impact on the coaching staff and the cohesion of the players.

The RFU added that several recommendations will be implemented before the July Test matches against the United States and Canada, which are currently under review.

As part of the recommendations, the RFU plans to “deepen its alignment” with England’s professional clubs, which will start with a summer conference between the major stakeholders in order “to find common ground and goals for the English game going forward”.

There will also be additional refereeing input in a bid to rectify England’s alarming ill-discipline, as well as “enhanced sports psychology”, a more streamlined use of data, and the counsel of “external rugby experts” to help Jones after each campaign.

“Sport is all about fine margins, which is why every campaign debrief is invaluable in helping us to learn and improve,” said RFU boss Bill Sweeney.

“Eddie approached this review with a great deal of self-awareness and humility, allowing us to look at every aspect of the tournament to identify every small change we can make in order to improve.”

Jones, who steered England to the World Cup final in 2019, was candid about his side’s below-par results so far this year.

“During the Six Nations we were not up to our usual high standards and we recognise that,” said the Australian.

“I’m looking forward to the summer tour, which will provide a great opportunity to see more of our emerging talent and I’m confident our next team will come back stronger this autumn building up to a winning performance in the next Six Nations.”