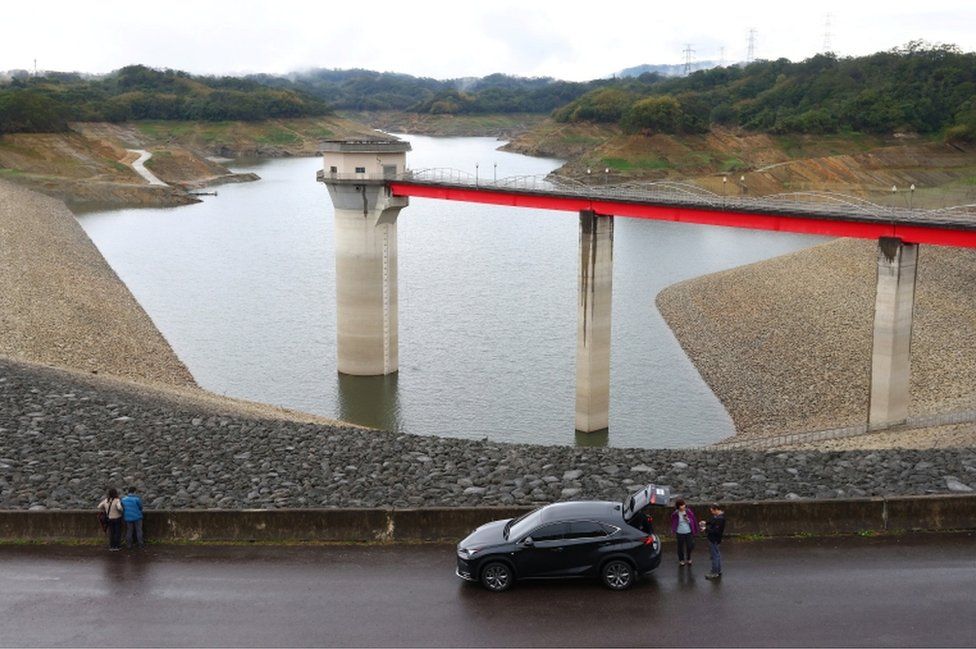 Taiwan is supposed to be one of the rainiest places in the world – its climate is subtropical in the northern and central regions, and tropical in the south. Typhoons are common in summer and autumn, and it also gets monsoons. It rains so often here that umbrellas are placed at subway stations and businesses for anyone to borrow.

But something unusual happened last year – no typhoon hit the island. And there has been little rain in the past year.

That has plunged Taiwan into its worst drought in 56 years. Many of its reservoirs are at less than 20% capacity, with water levels at some falling below 10%.

At the Baoshan No. 2 Reservoir in Hsinchu County, one of two primary water sources for Taiwan’s $100bn semiconductor industry, the water level is at the lowest it’s ever been – only 7% full.

If this and other reservoirs in Taiwan dry up, it could be detrimental for the global electronics sector, because so many of the products people use are powered by semiconductors – computer chips – made by Taiwanese companies.

They’re key to objects ranging from ventilators to smartphones, and the pandemic has left demand high and supply tight. The US is now worried about over-reliance on chips made overseas, including in Taiwan.

The sector is a big contributor to the island’s overall economy, but it requires a lot of water to clean the wafers that go into many tech devices. Struggling to ensure supplies, the government stopped irrigating more than 74,000 hectares of farmland last year.

It has also turned off the tap for residents and businesses in three cities and counties, including one of its biggest municipalities, Taichung, two days a week.

In dry areas, high-volume industrial users including semiconductor manufacturers have been asked to reduce water usage by 13%, and non-industrial users, such as hair salons and car wash businesses, by 20%.

Farmers have been the hardest hit.

Like thousands of crop planters cross Taiwan, Chuang Cheng-deng, a fourth generation rice farmer in Hsinchu, has been forced to leave his seven hectares of land fallow.

“We also think about our country’s economy, but they shouldn’t completely stop providing water. You can give us water for two days a week or one day. Farmers will find a way. But now they’ve completely cut our water, farmers can’t find a way out. You’re focusing entirely on semiconductors,” Mr Chuang says.

The government is compensating farmers, but Mr Chuang says a lot of landowners take the subsidies instead, and farmers can’t object for fear they will not be able to lease the land. Even if they get the money, they risk hurting their brand and losing clientele they’ve worked hard to build by not growing their products.

He points out the government has been encouraging young people to go into farming as Taiwan’s farmers are ageing, but young farmers are now left with no way to farm after they’ve invested in equipment and land.

Experts say Taiwan should have seen the warning signs.

“Taiwan has been suffering from a significant decrease in the number of rainy days each year since the 1960s,” says Hsu Huang-hsiung, a climate change expert at government-funded think tank Academia Sinica.

In parts of the island, the number of rainy days each year has fallen by about 80.

And a warming trend in the Indian Ocean since 1950 may have brought about the Pacific Ocean’s high pressure system last year, which prevented rain from falling in June and reduced the number of typhoons that were formed, according to experts.

“Climate change has never been a centre of discussion in our government or society. Although everybody talks about being afraid of climate change, it tends to be lip service. They express care, but don’t take any action,” Mr Hsu says.

Taiwanese people’s tendency to take water for granted – and some would say the government’s neglect of how water resources are managed – are at the root of the shortage, according to people who have looked into the problem.

“If you look at Taiwan as a whole, it has sufficient rainfall. The problem is how we use water,” said Kuo Yu-ling, a young farmer. “The first problem is our pipes leak water. Another problem is how we transfer water from one place to another. I don’t know if the government is considering transferring water from the eastern part of Taiwan to the west, because the east enjoys several months of rain each year, but Hsinchu and north of it get almost no rain.”

Leaking pipes have caused Taiwan to lose nearly 14% of its water. Deforestation has also led to soil runoff when it does rain, leading to sediment build-up in the reservoirs, depriving them of their capacity to hold more water.

The government has been tackling these problems: for example, the pipe leakage rate has dropped from 20% a decade ago.

However, Taiwan’s notoriously low water prices – blamed for giving consumers little incentive to conserve water – seem untouchable. Some say it’s because it would be very unpopular to raise prices and politicians are afraid to do so because they don’t want to lose votes.

At NT$11 (US$0.39; £0.27) a ton, Taiwan’s water rates are the second lowest among 35 countries and territories surveyed; half the cost of South Korea’s rate, four times lower than that of the US and six times lower than costs in the UK.

The Water Resources Agency says: “Due to the economic and social development and the fairness of social resources, it is still being carefully evaluated and there is no mature adjustment plan for the time-being.”

Instead, it’s looking at Taiwan’s surrounding waters for solutions, planning to build more seawater desalination plants. Most are located in outlying islands, with only three on Taiwan’s main island. A new facility has been built in Hsinchu to deal with the current drought, but it can only treat 13,000 tons of water daily, a drop in the bucket compared to the 170,000 tons used each day just by Hsinchu Science Park, where many semiconductor makers are based.

Desperate for rain, the government has tried to manipulate nature by carrying out cloud seeding numerous times, while officials from the Irrigation Agency held a rain worshipping ceremony in early March at which they prayed for help from Mazu, a sea goddess in Taoist and Buddhist traditions.

It’s hoping the annual rainy season, which normally lasts from mid-May to mid-June, will bring lots of showers.

But it shouldn’t get its hopes up. Last year, by May the rainy season was over and not enough rain had fallen.

For now, people with no tap water fill up their buckets twice a week in advance, or fetch water from tanks set up on the street on the off days.

TSMC and other chipmakers are planning for the worst. They are recycling more of the water they use – TSMC says it recycles more than 86%. The company is also buying truckloads of water from construction sites and other places. So far, it says, its operations have not been affected.

Kuo Yao-cheng, a spokesman for the Water Resources Agency, says everyone will have to pitch in to resolve this issue.

“The government is taking measures to address these problems. … Everyone and every sector must think about how we can conserve water, especially because climate change will lead to insufficient rainfall,” says Mr Kuo.

For his part, Farmer Chuang has taken to growing watermelons and sunflowers, which require less water. He pumps ground water from the well he has dug in his farm to water his plants. But he believes sacrificing farming every time there’s a drought will only worsen Taiwan’s already low food self-sufficiency rate – the amount of food its people consume that is locally grown and not imported from overseas.

“We have to find a long-term solution to this problem,” Mr Chuang says.

If Taiwan doesn’t rise to the challenge, both its farms and its prized semiconductor industry can expect to suffer in years to come.