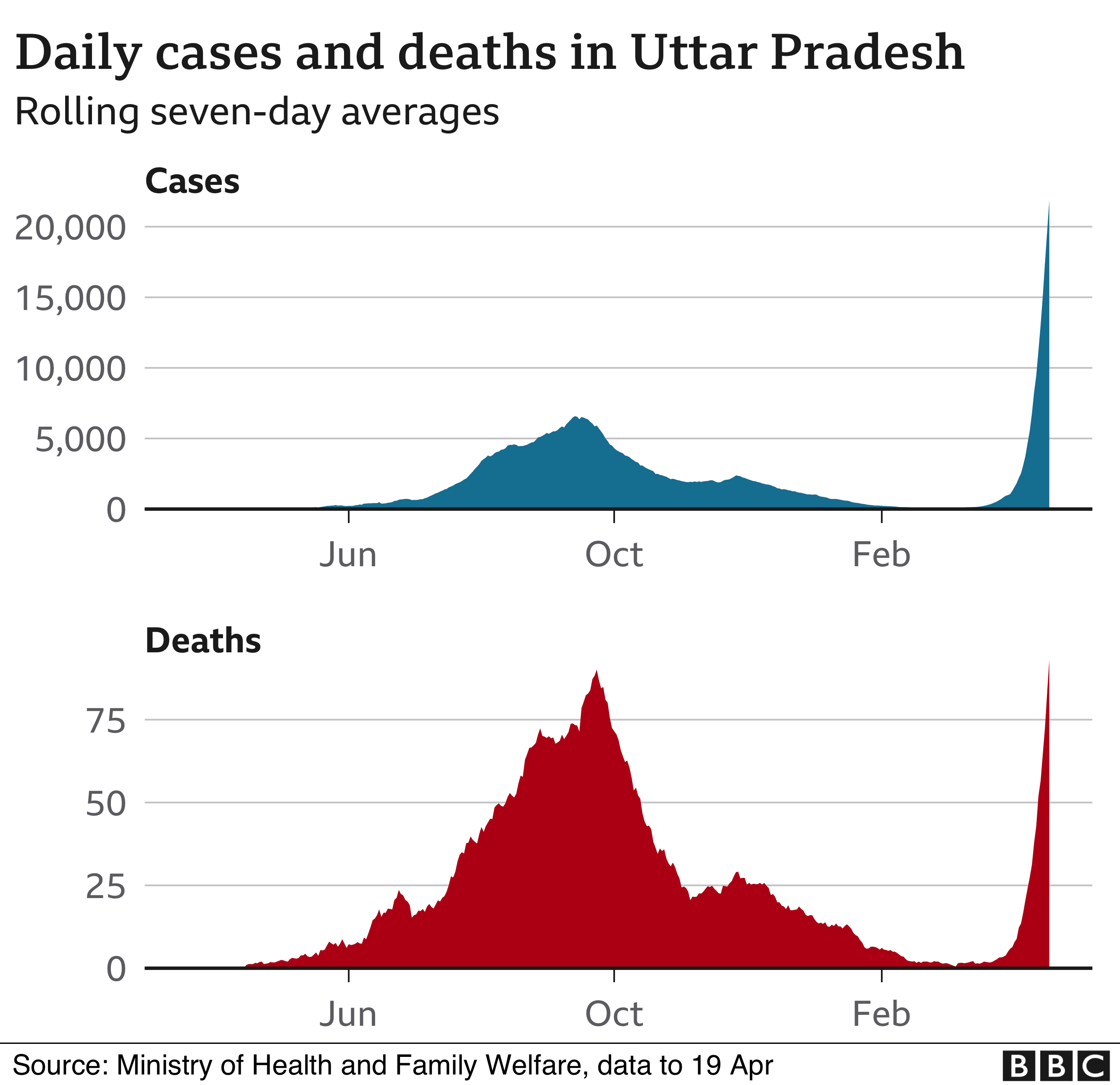 India is reeling under a severe second wave of Covid-19 and many states are struggling to cope with the rising numbers. Uttar Pradesh, India’s most populous state, is among the worst affected in the country and its people are suffering even as authorities insist the situation is under control, reports the BBC’s Geeta Pandey.

Kanwal Jeet Singh’s 58-year-old father Niranjan Pal Singh died on Friday in an ambulance while being ferried from one hospital to another. They had been turned away by four hospitals for a lack of beds.

“It was a heart-wrenching day for me,” he told me on the phone from his home in Kanpur city. “I believe if he had received treatment on time, he would have lived. But no-one helped us, the police, the health authorities or the government.”

With a total of 851,620 infections and 9,830 deaths since the pandemic began last year, Uttar Pradesh had not done too badly during the first wave that ravaged many other states. But the second wave has brought it to the brink.

Authorities say the situation is under control. But disturbing images of overcrowded testing centres, hospitals turning away patients and funeral pyres burning round the clock at cremation grounds in the state capital, Lucknow, and other major cities such as Varanasi, Kanpur and Allahabad have made national headlines.

With 240 million people, Uttar Pradesh is India’s most populous state. Home to every sixth Indian, if it was a separate country, it would be the fifth largest by population in the world, just behind China, India, US and Indonesia – and bigger than Pakistan and Brazil.

The state is also politically India’s most important – it sends the largest number of MPs – 80 – to the parliament, including Prime Minister Narendra Modi who, although from another state, contests from here. However, this political influence has brought it little development.

Thousands of new infections are being reported daily – though numbers are believed to be much higher – and it has put the state’s creaky health infrastructure firmly in the spotlight.

Among the sick are the state’s Chief Minister Yogi Adityanath, several of his cabinet colleagues, dozens of government officials and hundreds of doctors, nurses and other health workers.

Over the past few days, I have spoken to dozens of people from across the state, and heard grim stories.

Videos shared by a local journalist in Kanpur show a sick man lying on the ground in the parking lot of the government-run Lala Lajpat Rai hospital. A little distance away, an elderly man sits on a bench. They are both positive for Covid, but the hospital has no beds to accommodate them.

Outside the government-run Kanshiram hospital, a young woman wept as she said that two hospitals had refused to admit her sick mother.

“They’re saying they have run out of beds. If you don’t have a bed, put her on the floor, but at least give her some treatment. There are lots of patients like her. I’ve seen several people like me being turned away.

“The chief minister says there are adequate beds, please show me where they are. Please treat my mother,” she said, sobbing inconsolably.

The situation in the capital, Lucknow, is equally dire.

Sushil Kumar Srivastava was photographed sitting in his car, strapped to an oxygen cylinder while his desperate family drove him from one hospital to another. By the time they found a bed for him, it was too late.

When I called his son Ashish, he said he was too devastated to talk. “You know what’s happened. I’m in no condition to talk,” he said, his voice breaking.

Retired judge Ramesh Chandra’s handwritten note in Hindi, requesting help after the authorities failed to remove his wife’s body from their home, was shared by hundreds of people on social media.

“My wife and I are both corona positive. Since yesterday morning, I called the government helpline numbers at least 50 times, but no-one came to deliver any medicines or take us to hospital.

“Because of the administration’s laxity,” he wrote, “my wife died this morning.”

Personally, it’s come as no surprise to me that the state is struggling to deal with the coronavirus pandemic as it wreaks havoc on its people.

For years, I have despaired at the poor medical facilities in the state – it’s where my ancestral village is located and I know the struggles of finding a doctor or an ambulance even in normal times.

With a raging pandemic, the struggles have become harder.

In the holy city of Varanasi, which is also PM Modi’s constituency, long-time resident Vimal Kapoor, whose 70-year-old mother Nirmala Kapoor died from Covid in a hospital on last Thursday, described the situation as “bhayavah” – frightening.

“I have seen too many people dying in ambulances. Hospitals are turning away patients because there are no beds, chemists have run out of essential Covid drugs, and oxygen is in short supply.”

Mr Kapoor said when he took his mother’s body to the cremation ground, he encountered a “lashon ka dher” – a pile of bodies. The cost of wood for the pyre has gone up three times and the wait for a spot for cremation has risen from 15-20 minutes to five-six hours.

“I have never seen anything like that before. Wherever you look, you see ambulances and bodies,” he said.

Even that, activists and opposition politicians say, does not give a true picture of the infection’s spread. They accuse the state of keeping its case and death count low by not testing enough and not including data from private laboratories.

And there seems merit in their claim. Many people I spoke to said either they had failed to get tested or their positive results had not been uploaded on the state government site. From Lucknow, 62-year-old Ajay Singh sent me his wife’s positive test report which finds no mention in the state records.

And neither Mr Singh who died in Kanpur, nor Mrs Kapoor’s mother who perished in Varanasi, were included in the state’s tally of pandemic casualties – their death certificates did not mention coronavirus as the cause of death.

Indian media has also questioned the government data – with reports of a mismatch between the official number of deaths and the bodies at crematoriums in Lucknow and Varanasi.

Anshuman Rai, director of Heritage Hospitals – a private group that runs medical collages and hospitals in the state – describes the situation as “extraordinary”.

“The reason why services are cracking is because too many health workers, including doctors, nurses, ward boys and lab technicians are falling sick.

“At a time when we should be working 200%, we are not even able to do 100% because the health sector is totally manpower dependent.”

Critics, however, blame the state and the federal government for failing to anticipate the second wave.

They say there was a lull between September and February when the health services and infrastructure could have been augmented, the state could have created oxygen banks and stocked up on medicines, but they squandered the opportunity.

And with the virus spreading rapidly, things are unlikely to get better anytime soon.