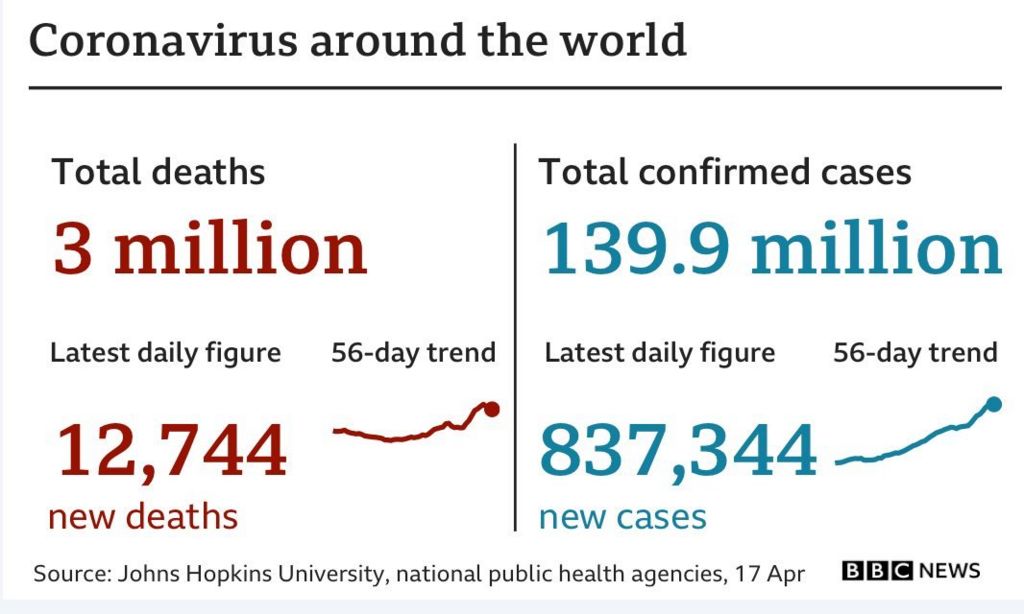 The US state department is to advise Americans to avoid 80% of countries worldwide because of the coronavirus pandemic.

In a note to the media about its updated travel guidance, it said the pandemic continued to “pose unprecedented risks to travellers”.

The current US “Do Not Travel” advisory covers 34 out of 200 countries.

Covid-19 has now claimed more than three million lives worldwide – more than half a million of them in the US.

The World Health Organization (WHO) warned the world was “approaching the highest rate of infection” so far, despite the global rollout of vaccination programmes.

The US state department said its decision to update its travel advisories was to bring it more in line with those from the Centers for Disease Control and Prevention (CDC) and “does not imply a reassessment of the current health situation in a given country”.

However, it said the move would “result in a significant increase in the number of countries at Level 4: Do Not Travel, to approximately 80% of countries worldwide”.

Only three places at the world are assessed at the lowest of the state department’s four risk levels – “Exercise normal precautions”. They are Macau, Taiwan and New Zealand.

Even Antarctica is at level two – “Exercise increased caution” – while the UK is at level three – “Reconsider travel” – with an extra warning to exercise caution because of the risk of terrorism.

The CDC currently recommends all Americans refrain from travelling domestically until they have been fully vaccinated and warns that international travel “poses additional risks” even for those vaccinated.

While more than 860 million doses of coronavirus vaccines have been administered in 165 countries worldwide, many countries are still struggling to contain the virus.

Canada has also reported a recent rise in cases and Papua New Guinea has been highlighted as a cause for concern.

While some countries – such as Israel and the UK – have secured and delivered doses to a large proportion of their population, many more countries are still waiting for their first shipments to arrive.

That is leading to warnings about growing “vaccine inequity” – jabs not being being shared fairly between rich and poorer countries.