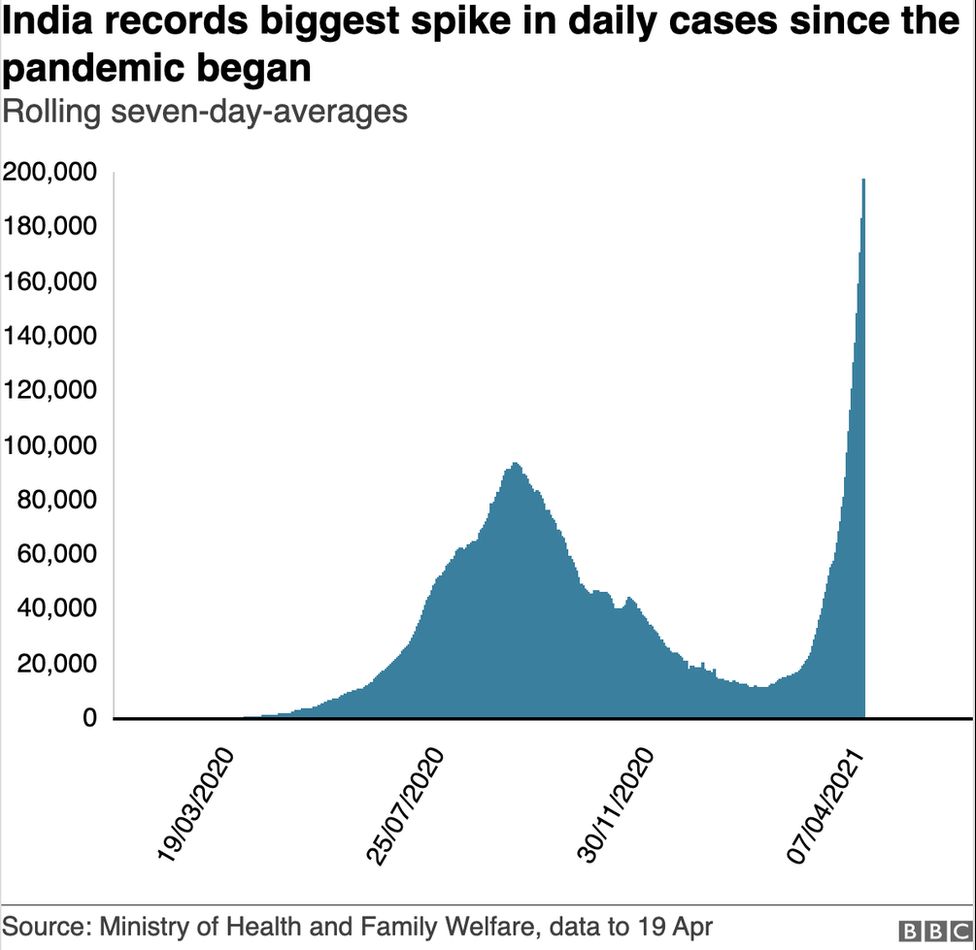 India’s addition to the UK’s “red list” of banned countries due to rising Covid cases and concerns over a new variant may have come too late, the UK’s former chief scientific adviser has said.

Prof Mark Walport told the BBC he believed the new variant was “more transmissible” and there were “good reasons” for keeping it out of the UK.

Health officials say it is too early to know whether it is more transmissible.

India has been reporting more than 200,000 cases daily since 15 April.

Its capital Delhi announced a week-long lockdown after a record spike in cases overwhelmed the city’s healthcare system.

From 04:00 BST on Friday 23 April, most people who have travelled from India in the last 10 days will be refused entry to the UK.

British or Irish passport holders, or people with UK residence rights, will be allowed in but must quarantine in a government-approved hotel for 10 days.

He will joined by the medical director of primary care for NHS England, Dr Nikita Kanani.

Of the decision to put India on the UK’s red list, Prof Walport told BBC Breakfast: “These decisions are almost inevitably taken a bit too late in truth, but what’s absolutely clear is that this variant is more transmissible in India.”

He said he believed it was becoming the “dominant variant” in India, while there were also concerns it could be more effective at escaping a natural or vaccine-induced immune response, “so there’s good reasons for wanting to keep it out of the country if at all possible”.

The Indian variant – officially known as B.1.617 – has been designated a “variant under investigation” in the UK, with 103 cases – almost all linked to travel – identified in Britain so far.

Prof Sharon Peacock, director of the UK’s genetic surveillance programme, Covid-19 Genomics UK, said the variant had been around for “some time” and was first identified in October last year.

She said it was “not clear at the present time” whether it was “the main driver” for the wave of infections in India, but putting the country on the travel red list was necessary due to an “upward trend” in UK cases involving the variant.

Viruses change or mutate all the time, so the arrival of this new variant is not surprising. It’s one of many thousands. But how worrying is it?

Chat with the experts and they will tell you “watch this space”.

Certainly, some of the genetic changes it’s undergone might make it more contagious or able to escape some of the protection given by current vaccines or past Covid-19 infection.

More checks and tests are needed to know for sure.

Scientists are urgently studying its behaviour and spread to judge the threat.

It’s possible it will need to be added to the UK government’s variants of concern list, alongside the variants first seen in South Africa, Brazil and Kent.

These variants are on the list because evidence suggests they appear to transmit and infect more easily, may be riskier to health or might compromise vaccination efforts if left to run rampant.

There’s no suggestion yet that the Indian variant will outcompete these or become dominant in the UK.

More than 100 cases of the Indian variant have been confirmed in the UK. That may sound like a large number, but it is less than 1% of the Covid samples that have been analysed for their genetic make-up in the UK.

In the meantime, keeping all cases of Covid down will help prevent illness and deaths while the vaccine rollout continues.

Non-essential travel is banned from the UK and those arriving must quarantine. People can currently travel abroad for a limited number of reasons, such as education or work.

The earliest date non-essential travel will be allowed from England, Scotland or Wales is 17 May, while Northern Ireland has not set a date.

All returning passengers must show proof of a negative Covid test taken within 72 hours before travelling – which can take the form of a printed document, email or text message.

On Tuesday, MPs heard that about 100 people are trying to enter England each day with a fake negative Covid certificate.

Lucy Moreton, of the Immigration Services Union, which represents UK border and customs staff, told the All Party Parliamentary group on coronavirus that the documents are “very easy” to forge.

Asked how many fakes could be slipping through the net, Ms Moreton said it is “inherently unknowable”, adding that a lot of border and quarantine controls are based on “trust”.

She told the committee that long queues found at airports could be a “breeding ground” for coronavirus.

Kirthi Mundhada and her husband Nishant Mehta travelled to Hyderabad, India, for her brother’s wedding and to see her parents, who are unwell.

The couple, who live in Brighton, have return flights for 16 May and are now trying to find flights home before 23 April – which is when India is added to the red list.

“I don’t know what’s going to happen with work and we have a mortgage and bills to pay.

“Hotel quarantine will cost us around £2,500 and we don’t have much money.”

Vick Busa says he and his wife Isha had to travel to India with their two-year-old daughter Aahana for a family emergency.

The family, who are from Essex, were due to return to the UK last month, but after India started restricting flights, theirs was cancelled.

Vick, who is currently in Ghaziabad in Uttar Pradesh, tried to find flights returning before the new rules kick in, but says the family will now have to quarantine as their flights are not until 4 May.

He worries it will be “very difficult” being “locked up in a room for 10 days with stringent rules” with their young daughter.

The new travel rule applies to England and Scotland. There are currently no direct international flights into Wales or Northern Ireland.

The announcement came after Prime Minister Boris Johnson cancelled a planned trip to India, which had been due to take place on 26 April, amid rising cases there.

Meanwhile the UK recorded a further 33 deaths within 28 days of a positive coronavirus test and 2,524 new infections, according to the latest government figures.

The data also showed that more than 33m people in the UK have had a first dose of a Covid vaccine, while more than 10.4m have received both doses.

How will these new travel restrictions affect you? Get in touch by emailing haveyoursay@bbc.co.uk.