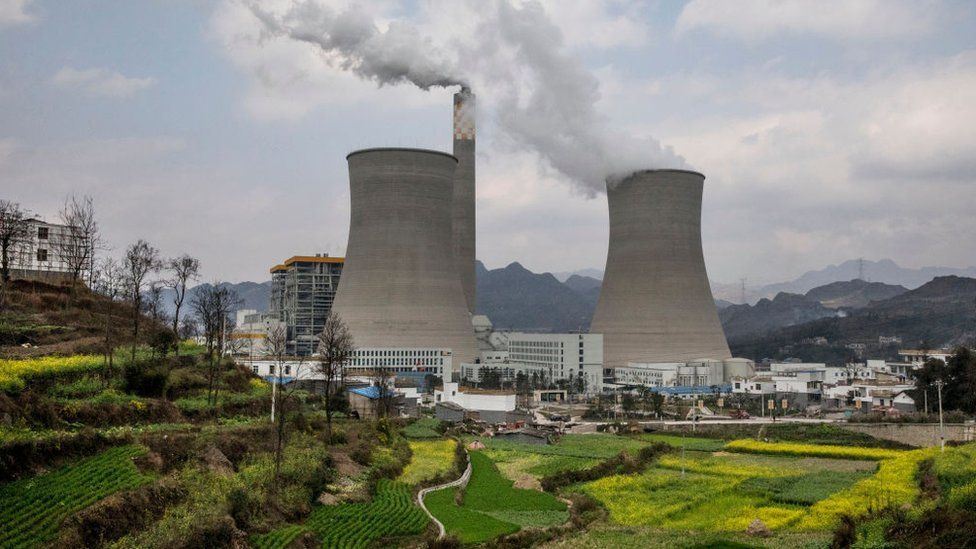 The International Energy Agency (IEA) is predicting a major surge in CO2 emissions from energy this year, as the world rebounds from the pandemic.

Total energy emissions for 2021 will still be slightly lower than in 2019, the agency says.

But CO2 will rise by the second largest annual amount on record.

The use of coal in Asia is expected to be key: the IEA says it will push global demand up by 4.5%, taking it close to the global peak seen in 2014.

However, renewable energy is also booming, with green sources set to supply 30% of electricity this year.

The empty roads, high streets and airports that marked the global response to coronavirus saw the biggest fall in demand for energy since World War Two.

That decline saw carbon emissions tumble by around 6% in 2020, as the more carbon-intensive fuels such as coal and oil were hardest hit by restrictions.

Many hoped that these changes in energy use would be sustained in the recovery from the pandemic, but these latest predictions from the IEA indicate that is not likely to be the case.

Energy demand is booming in the developing world, with a rise of 3.4% predicted for this year – this contrasts with richer economies, where overall energy use is expected to still be 3% below 2019.

In the places where energy demand is growing, coal is playing a key role.

This is mainly happening in Asia, where China is leading the way and expected to account for more than half of the global coal growth this year.

But even in the US and EU, where coal has been on the back foot for some time, demand is expected to rise – although it will still likely remain below 2019 levels in these regions.

According to the IEA, coal demand is likely to be close to the global peak seen in 2014 – and that has implications for efforts to rein in climate change.

“Global carbon emissions are set to jump by 1.5 billion tonnes this year – driven by the resurgence of coal use in the power sector,” said Fatih Birol, the IEA’s executive director.

“This is a dire warning that the economic recovery from the Covid crisis is currently anything but sustainable for our climate.”

The emissions predictions for 2021 would be even worse, according to the IEA, if demand for oil increased to pre-covid levels.

By the end of this year, oil use for aviation is still expected to be 20% below 2019 levels.

However there are some strong positives for renewable energy in the IEA report. Wind, solar and other sustainable forms grew 3% during 2020, and in the power sector they are expected to grow by 8% this year.

Overall green energy sources will provide 30% of electricity generation, the highest level since the beginning of the industrial revolution.

Reflecting the complexities of the global energy picture, China is likely to account for almost half the global increase in renewable electricity this year.

“As we have seen at the country-level in the past 15 years, the countries that succeed to cut their emissions are those where renewable energy replaces fossil energy,” said Prof Corinne Le Quéré, from the University of East Anglia, who has studied the factors that drive countries to change their power systems.

“What seems to be happening now is that we have a massive deployment of renewable energy, which is good for tackling climate change, but this is occurring alongside massive investments in coal and gas.”

Later this week, President Biden will host a climate summit, with around 40 presidents and prime ministers expected to take part virtually.

The US is also expected to announce a significantly improved emissions cutting target for 2030.

According to the IEA, these actions can’t come quickly enough if emissions are to be reined in to keep the temperature targets of the Paris climate agreement within sight.

“Unless governments around the world move rapidly to start cutting emissions, we are likely to face an even worse situation in 2022,” said Dr Birol from the IEA.

“The leaders’ summit on climate hosted by US President Joe Biden this week is a critical moment to commit to clear and immediate action ahead of COP26 in Glasgow.”