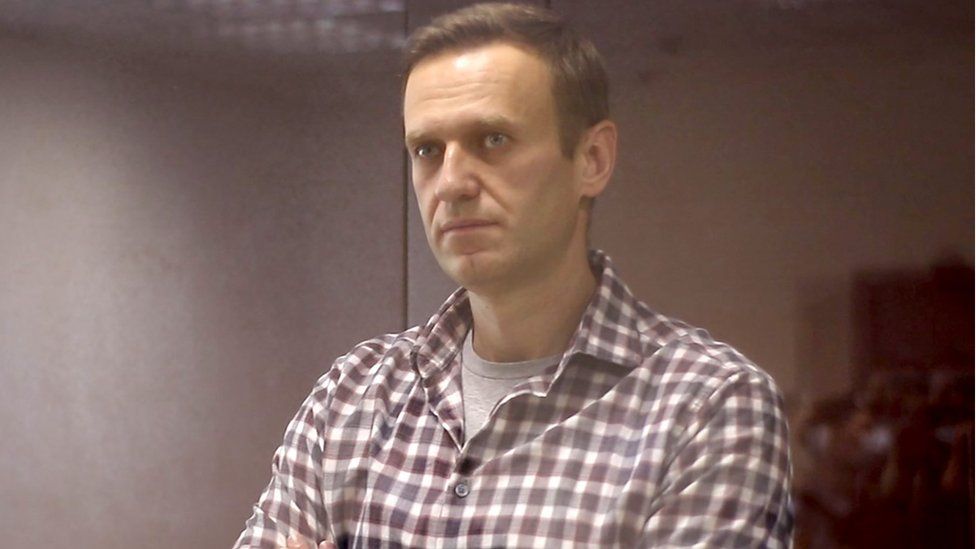 The US has warned Russia there will be “consequences” if the opposition activist Alexei Navalny dies in jail.

The UK, France, Germany and the European Union have also expressed their concern over his treatment.

Navalny’s doctors say he “will die within the next few days” if not given urgent medical attention for acute back pain and leg numbness.

Russia’s ambassador to the UK has said that Navalny is attention seeking and “will not be allowed to die in prison”.

A prominent critic of President Vladimir Putin, Navalny, 44, was jailed in February for old embezzlement charges, which he claims are politically motivated.

He started a hunger strike on 31 March in protest at not being able to see his own medical team, and his doctors say recent blood test results indicate he could suffer kidney failure and go into cardiac arrest at any moment.

On Sunday, a number of countries joined the international protest against Navalny’s treatment inside the Russian jail in the town of Pokrov, about 100 km (62 miles) east of Moscow.

US national security adviser Jake Sullivan told CNN there would be “consequences if Mr Navalny dies” and Russia would be “held accountable by the international community”, while President Joe Biden said his medical treatment was “totally unfair and totally inappropriate”.

The US is already embroiled in a diplomatic row with Russia over the near-fatal poisoning of Navalny last year, with the chemical warfare agent Novichock.

The Kremlin denies Navalny’s claims that President Vladimir Putin ordered the attack. But US intelligence officials concluded that the Moscow government was behind the poisoning, prompting the Biden administration to impose sanctions on senior Russian officials.

Mr. Navalny should be immediately released, and the perpetrators of the outrageous attack on his life must be held accountable. The Kremlin’s attacks on Mr. Navalny are not just a violation of human rights, but an affront to the Russian people who want their voices heard.

EU leaders are expected to discuss the situation on Monday, and Josep Borrell, the bloc’s top diplomat, said the EU was “deeply concerned” and called for prison authorities to grant access to Navalny’s medical team immediately.

The UK’s Foreign Office said in a statement: “Mr Navalny must be given immediate access to independent medical care. We reiterate our call for his immediate release from his politically motivated imprisonment.”

Navalny’s 20-year-old daughter, Daria Navalnaya, who is currently studying in California, wrote “allow a doctor to see my dad” on Twitter.

Navalny’s wife Yulia said he had lost 9kg (19 lbs) since starting his hunger strike, according to AP.

Deeply concerned by Alexei @navalny’s deteriorating health. Russian authorities must grant him immediate access to medical professionals he trusts. We hold them to account for ensuring his safety & health.

Navalny’s supporters in Russia are organising a nationwide protest on Wednesday, saying “there are circumstances in which you need to act quickly, otherwise the irreparable will happen”.

Dr Alexander Polupan, who treated Navalny after he was poisoned with Novichock last year, said his blood test results were an “absolute indication” that he needed urgent medical care or he would “die within the next [few] days”.

On Sunday, his personal physician, Anastasia Vasilyeva, who has previously been arrested for protesting outside Navalny’s jail, tweeted that she and the three doctors had “stood for two hours and begged” to be let into the jail, but they were refused entry.

Also joining the call for action are more than 70 well known writers, artists and academics, who have have signed a letter calling on President Putin to ensure Navalny receives adequate medical care.

In an interview with the BBC’s Andrew Marr recorded on Friday but aired on Sunday, Russia’s ambassador to the UK, Andrei Kelin, said that Navalny was not in danger.

“Of course he will not be allowed to die in prison, but I can say that Mr Navalny behaves like a hooligan absolutely in trying to violate every rule that has been established,” he said, adding that activist was attempting “to attract attention”.