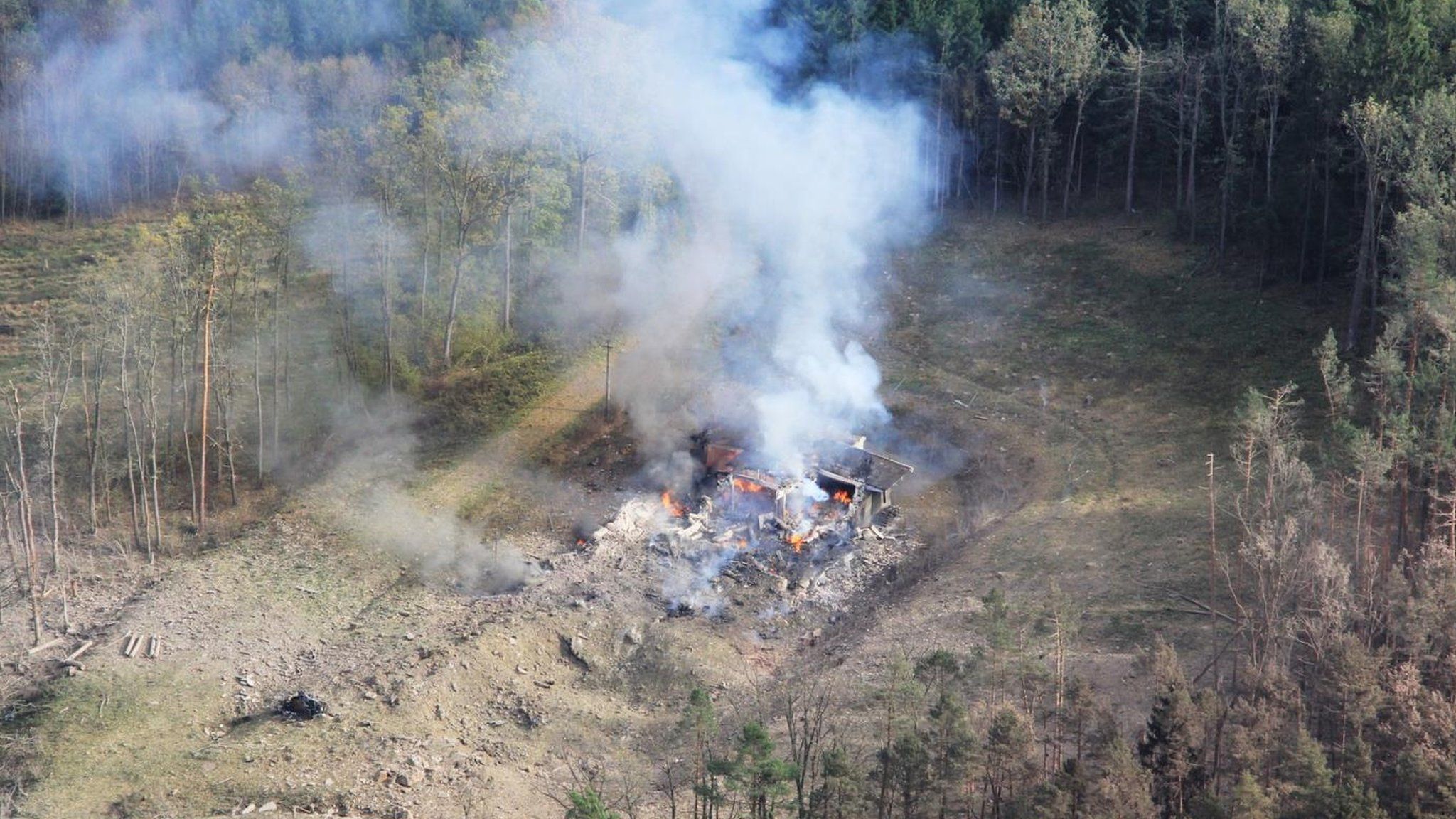 Russia has announced that 20 diplomats from the Czech Republic will be expelled after the Czechs expelled 18 Russian diplomats.

The Russian diplomats are suspected of being intelligence operatives involved in an explosion at a Czech arms depot in 2014 which killed two people.

Two Russians suspected of carrying out a nerve agent attack in the UK in 2018 are now also being linked to the blast.

EU foreign ministers are due to discuss the accusations.

“In their desire to please the United States against the background of recent US sanctions against Russia, Czech authorities in this respect even outdid their masters from across the pond,” said a foreign ministry statement.

What are the claims?

Czech authorities say the diplomats are believed to be intelligence operatives, accusations the Russians have classed as unfounded and absurd.

The explosion tore apart an ammunitions storage depot in a forest at Vrbetice in the Czech Republic on 16 October 2014.

Windows in nearby buildings were blown out and local schools were evacuated as emergency vehicles rushed to the scene. The remains of two men – aged 56 and 69 – who worked at the site were found more than a month later.

The blast was assumed to have been an accident.

But painstaking detective work by the Czech authorities has pointed the finger at Moscow – and Unit 29155 of Russia’s GRU intelligence agency.

How might the UK nerve agent suspects be involved?

Czech Police have identified two men in connection with the blast – Alexander Mishkin and Anatoly Chepigov – who are also accused of involvement in an attack using the nerve agent Novichok in the English city of Salisbury three years ago.

Sergei Skripal, a former Russian double agent, and his daughter Yulia were poisoned, while a local woman, Dawn Sturgess, was killed months later by Novichok traces on a discarded perfume bottle.

Czech police matched images of the blast suspects to the two accused by Britain of the Salisbury poisoning.

The clue came from passport photos sent in an email to Imex Group, the company which operated the depot.

The email claimed to come from the National Guard of Tajikistan. It asked for two men to be given access to the site for an inspection visit. Scans of their passports were attached. The men were said to be Ruslan Tabarov from Tajikistan and Nicolaj Popa, a Moldovan citizen.

The pictures on the passports match those of the two men accused by Britain of the Salisbury poisoning.

The men booked into accommodation in Ostrava, near the ammunition depot on 13 October. They were booked to stay until 17 October.

The explosion took place on the 16th and that day the pair headed to Austria to fly from Vienna airport to Moscow. The authorities do not appear to know exactly how the depot was blown up.

Czech media reports, quoting unnamed investigators, suggest arms and ammunition at the depot might have been destined for either Ukrainian forces fighting pro-Russian rebels or rebels in Syria fighting the Russian-backed government there.

There were actually two blasts at the depot, the first when ammunition exploded on 16 October, and the second on 3 December 150m (500ft) away, at a building containing artillery ammunition and submachine guns.

One of the people storing weapons at the depot was a Bulgarian arms dealer called Emilian Gebrev, sources have told the BBC.

In April 2015, six months after the Czech explosion, Mr Gebrev fell seriously ill in the Bulgarian capital Sofia. After a month in hospital, he was released but then fell sick again. Despite suspicions, Bulgarian authorities made little progress amid talk it was simply food poisoning.

It was only after events in Salisbury in 2018 that people paid more attention.

In addition to the two GRU officers, a third man, using the name Sergei Fedotov, was identified as coming to the UK to oversee the Salisbury poisoning. He was also found to have been in Bulgaria at the time of Mr Gebrev’s poisoning.

The Czech Republic will inform Nato and EU allies about its suspicions, and will discuss the matter at an EU foreign ministers’ meeting on Monday, its acting Foreign Minister Jan Hamacek said.

The US state department said it stood with the Czech Republic in its “firm response against Russia’s subversive actions on Czech soil”.

Earlier this week the US expelled 10 Russian diplomats and imposed sanctions in response to the “SolarWinds” hack last year, bullying Ukraine and interference in the 2020 US election.