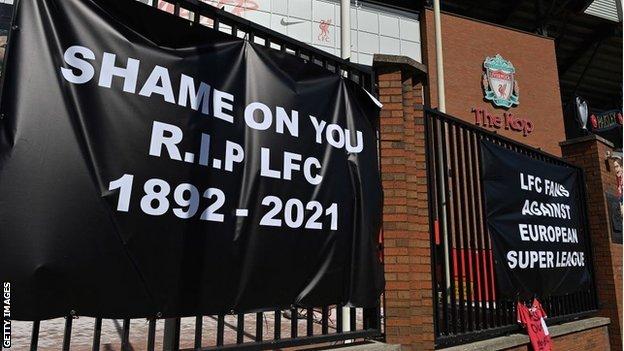 The European Super League (ESL) is a “disgraceful, self-serving” plan and a “spit in the face of football lovers”, says Uefa president Aleksander Ceferin.

He also said players who play for teams involved in the closed league would be “banned from the World Cup and Euros”.

Arsenal, Chelsea, Liverpool, Manchester City, Manchester United and Tottenham are among 12 clubs who have agreed to join the proposed ESL.

“We are all united against this nonsense of a project,” said Ceferin.

“I cannot stress more strongly how everyone is united against these disgraceful, self-serving proposals, fuelled by greed above all else,” he said, after plans for a revamped 36-team Champions League were agreed.

“[It is a] cynical plan, completely against what football should be. We cannot and will not allow that to change.

“Players who will play in the teams that might play in the closed league will be banned from the World Cup and Euros. We urge everyone to stand tall with us as we do everything in our power to ensure this never ends up in fruition.

“This idea is a spit in the face of all football lovers. We will not allow them to take it away from us.”

The ESL will be a “new midweek competition” with teams continuing to “compete in their respective national leagues”.

After it was announced on Sunday, Fifa expressed its “disapproval” of the proposed competition and called on “all parties involved in heated discussions to engage in calm, constructive and balanced dialogue for the good of the game”.

World football’s governing body previously said it would not recognise such a competition and any players involved could be denied the chance to play at a World Cup.

On Monday, Ceferin reiterated clubs and players involved with the ESL could be banned “as soon as possible” from all Uefa competitions.

“We’re still assessing with our legal team but we will take all the sanctions that we can and we will inform you as soon we can,” he said.

Ceferin was particularly critical of Manchester United executive vice-chairman Ed Woodward and Juventus chairman Andrea Agnelli, who have both stepped down from their roles at Uefa.

Agnelli was also a long-time president of the European Club Association (ECA), from which all 12 clubs involved in the ESL have resigned.

“I don’t want to be too personal. But the fact is that I’ve never seen a person that would lie so many times, so persistently that he did was unbelievable.

“I spoke with him also on Saturday afternoon. He said, ‘These are all only rumours. Don’t worry, nothing is going on’. And then he said, ‘I’ll call you in one hour’. And he turned off the phone.”

On Woodward, Ceferin added: “I didn’t have much contact with him but he called me last Thursday in the evening saying that he’s very satisfied with the [Champions League] reforms, that he fully supports the reforms, and that the only thing he would like to speak about is about financial fair play.

“And obviously he already signed something else.”

Chelsea boss Thomas Tuchel, the only manager of one of England’s ‘big six’ joining the ESL to speak so far, said he “trusts the club to make the right decisions”.

“I’ve know since yesterday but I am here to be in the hardest competition, it’s why I came here to play the toughest competitions,” he said.

“I am part of this club and I trust this club to make the right decisions. I think it’s too early to judge everything and it’s not my part. On my badge it says that everyone has to play their role. My role is to coach, be focused, and we’ve another game tomorrow.”

Earlier on Monday, Aston Villa chief executive Christian Purslow said the ESL was a “grotesque concept” and goes against everything football stands for.

“It would enable a small number of clubs to be in this competition come what may and, for millions of people in football, that goes against everything the sport means and stands for.

“The idea is that the uncertainty that comes with sport, that makes it so compelling, that we all love, is actually damaging to the business models of these huge clubs.

“So the scheme is designed to take away that uncertainty, to give predictability to their businesses so that, if they’re badly managed or have a poor year, they’re still in the premier tournament.

“Does that sound like sport or football to you? To me it sounds a grotesque concept.”

Writing on Twitter, Leeds owner Andrea Radrizzani said: “Absolutely against the sporting spirit, the dream of millions of fans to conquer the champions on the field, with planning, vision, work. Kill dreams of players and fans.

“The teams are fans and WE are custodians of the club.”

Southampton boss Ralph Hasenhuttl reiterated his opposition to the move.

“There cannot be any other opinion about it. It’s a big threat, what I see coming up – war, if you want, from the big clubs,” he said.

“We will see what the future brings but it’s a big threat and we have to fight against it.

“I hope we have the fans with us, and without the fans football won’t work. They have a lot of power, these big clubs.”

And Preston North End, one of the Football League’s 12 founding clubs in 1888, said the breakaway could “destroy nearly 150 years of football history for short-term riches for the few”.

North End won the first two league titles and the club’s statement went on: “The underlying principle that these breakaway clubs appear to have completely disregarded is that football is most importantly about its supporters.

“This European Super League plan has totally ignored their voice, which is unacceptable.”