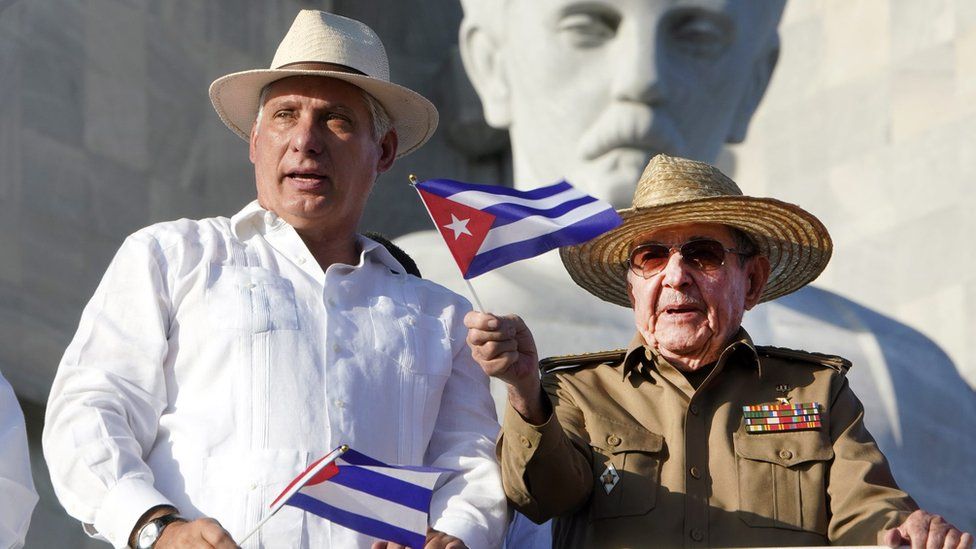 Mr Díaz-Canel, who in 2018 succeeded Mr Castro as Cuba’s president, had been widely tipped for the arguably more influential post of party leader.

The transition means that the island will be governed by someone other than Fidel or Raúl Castro for the first time since the Cuban revolution in 1959.

Mr Díaz-Canel is seen as loyal to the Castros and their economic model.

Speaking on Friday, when Mr Díaz-Canel had not been officially named yet as first secretary, Raúl Castro said that he would hand over the leadership to a younger generation “full of passion and anti-imperialist spirit”.

At 60, Mr Díaz-Canel is almost 30 years younger than his predecessor.

It follows the announcement on Friday – on the first day of the party’s four-day congress – that Raúl Castro was stepping down from the key position of first secretary.

The 89-year-old had been in the post since 2011, when he took over from his older brother, Fidel Castro.

Between them, the two brothers have ruled Cuba since the 1959 revolution which overthrew the authoritarian ruler Gen Fulgencio Batista.

A sense of continuity

By Will Grant, BBC Cuba correspondent

President Diaz-Canel has shown himself as loyal to the Castro-model of state socialism in Cuba and – as Cuba’s president – has only allowed a very limited expansion of the private sector, in line with his predecessor’s wishes.

Politically, there is no likelihood of any sudden changes and it is clear that Mr Castro sees Mr Díaz-Canel as a safe pair of hands.

Raúl Castro wants to leave his final official role in the Cuban revolution with a sense of continuity, of passing the torch to a younger leader who holds the same values.

Given the bleak economic outlook, however, Mr Diaz-Canel may well have to further liberalise the centrally controlled economy in the very near future.

Fidel Castro was the country’s leader from 1959. He fell ill in 2006 and two years later he formally handed over the presidency to his brother.

Fidel Castro died in 2016 but his brother Raúl maintained the grip of Cuba’s Communist Party on power on the island.

Who is Miguel Díaz-Canel?

Even though Miguel Díaz-Canel was born after the Cuban revolution, he is seen as one of its staunchest defenders and a close ally to the Castros.

He began his political career in his early 20s as a member of the Young Communist League in Santa Clara, a city dominated by the mausoleum of Che Guevara, who fought alongside the Castros in the Cuban revolution.

He worked his way up through the ranks and became minister of higher education in 2009.

In 2013, he became vice-president of the powerful council of state. Five years later, in 2018, he was elected Cuba’s president by the country’s National Assembly with 99.83% of the vote in a process which was fully overseen by the ruling Communist Party.

What are his policies?

And while he has vowed to protect Cuba’s sovereignty and the Castros’ ideals, he faces a country mired in its most serious economic crisis in decades.

Cuba’s economy shrank by 11% last year as the Covid-19 pandemic as well as sanctions and tighter financial restrictions imposed by the US government under former President Donald Trump hit the island hard.

Mr Díaz-Canel welcomed the election of President Joe Biden and said that he believed “constructive bilateral relations respecting another’s differences” were possible under the new president.

In his final address to the Communist Party on Friday, Mr Castro echoes that sentiment, saying that there was a “willingness to conduct a respectful dialogue and build a new kind of relationship with the United States”,

However, with the White House saying that a shift in its policy towards Cuba was not among President Joe Biden’s top foreign policy priorities, any possible changes in the two countries’ relationship still appear to be far off.