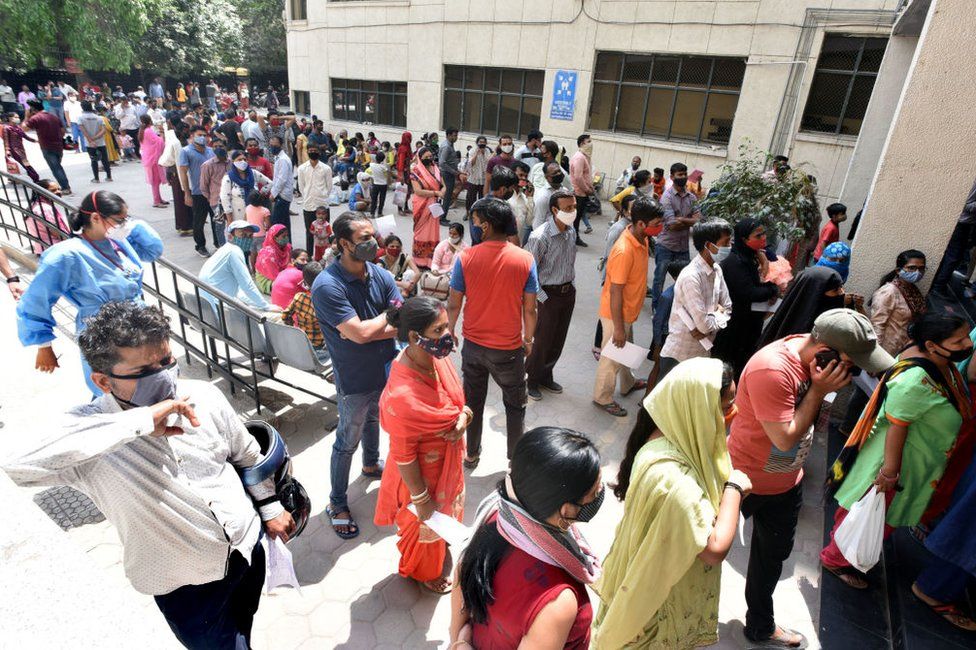 India’s capital, Delhi, has announced a week-long lockdown after a record spike in cases overwhelmed the city’s healthcare system.

Government offices and essential services, such as hospitals, pharmacies and grocers, will be open during the lockdown, which starts on Monday night.

The city had imposed a weekend curfew, but reported its highest single-day spike so far on Sunday – 24,462 cases.

India has been reeling from a deadly second wave since the start of April.

Delhi Chief Minister Arvind Kejriwal said the city had almost run out of beds at hospital intensive care units (ICUs) and that oxygen was in short supply.

“I have always been against lockdowns, but this one will help us amplify the number of hospital beds in Delhi,” he told a virtual press conference on Monday.

He also appealed to the city’s migrant workers not to leave – last year’s national lockdown saw millions of them heading back to their villages after they found themselves unemployed and running out of money.

“This was a difficult decision to take but we had no other option left,” Mr Kejriwal said. “I know when lockdowns are announced, daily-wage workers suffer and lose their jobs. But I appeal to them to not leave Delhi. It’s a short lockdown and we will take care of you.”

Crematoriums in the area are also overwhelmed, reports the BBC’s Rajini Vaidyanathan in Delhi. Distressing images showed bodies being burnt on the pavement, outside one on the outskirts of the capital.

One in three people in Delhi is testing positive.

India’s health ministry has announced it will open its Covid-19 vaccination drive to all adults from 1 May.

“In a meeting chaired by [Prime Minister] Narendra Modi, an important decision of allowing vaccination to everyone above the age of 18 from 1 May has been taken,” it said in a statement quoted by the AFP news agency.

India has been reporting more than 200,000 cases daily since 15 April – well past its peak last year, when it was averaging around 93,000 cases a day.

On Monday, UK Prime Minister Boris Johnson cancelled a planned trip to India in view of the situation. Mr Johnson and Mr Modi will speak later this month to “launch ambitious plans for the future partnership”, a statement said.

UK Health Secretary Matt Hancock also announced on Monday afternoon that India had been placed on the country’s travel red list, which means people who have been in India in the last 10 days cannot enter the UK.

Maharashtra, which has India’s financial hub Mumbai as its capital, remains the worst-hit state, accounting for nearly a third of India’s more than 1.9 million active cases.

But Delhi is the worst-hit city, confirming more cases daily than Mumbai in recent days.

Hospitals are struggling to accommodate Covid-positive patients in Delhi and other badly hit cities such as Mumbai, Lucknow and Ahmedabad. Several states have been reporting an acute shortage of beds in Covid wards and ICUs.

Even test results are being delayed because of overwhelming demand, which, doctors say, is leading to people not getting diagnosed and treated in time.

Experts say the Indian government ignored warnings of a second wave and did little to prevent it or even contain it – they point to cricket matches attended by unmasked crowds, massive election rallies that appeared to flout basic Covid safety rules, and a huge Hindu festival where millions congregated on the banks of the Ganges river earlier this month to take a holy dip.

Buoyed by a sharp dip in case numbers and the start of the vaccination drive, India began the year on what appeared to be a normal note. But things soon took a turn for the worse as people began leaving home more, wearing masks less and socialising in larger groups. The entry of variants and a lag in the vaccination drive only drove up infections further, experts say.

Within weeks, India shot to the top of the world’s Covid chart, recording more cases daily than any other country.