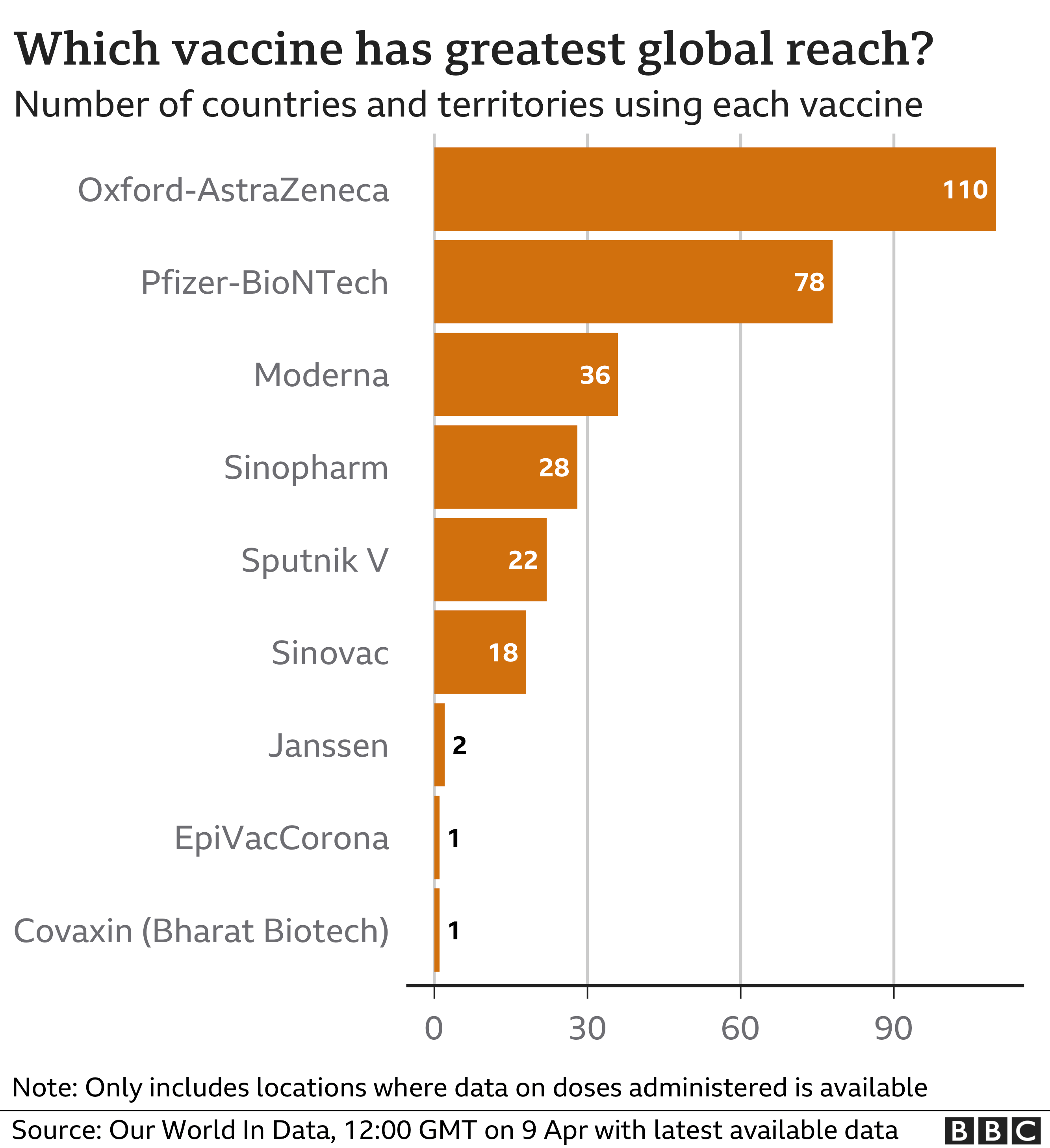 While some countries are scrambling to get their hands on vaccines, others are left wondering what to do with jabs they’ve ordered but can no longer use, following concerns over safety.

Several countries have restricted use of the Oxford-AstraZeneca (AZ) and Johnson & Johnson (J&J) vaccines for younger age groups because of a very small risk of rare blood clots.

Denmark has stopped giving out AZ altogether, triggering a wave of interest in its unused doses.

In a bold move, the Czech Republic offered to buy “all AstraZeneca vaccines from Denmark”. Estonia, Latvia and Lithuania also expressed interest.

Why is this happening?

There are growing concerns about rare – and sometimes fatal – cases of blood clots, especially in younger people. But health regulators worldwide point out the risk from Covid-19 is far greater.

Based on figures from the UK medicines regulator, if 10 million imaginary people were given the AZ vaccine, you might expect to see 40 of these clots. About 10 people would die – a one-in-a-million chance.

That’s roughly the same risk as being murdered in the next month or – if you get in a car and drive for 250 miles – the risk of dying in a road accident on that journey.

Nevertheless, the Danish health authority made the decision to discontinue use of the AZ jab. It said it had other vaccines available, the epidemic was under control there and it was acting out of caution in response to a “known risk of severe adverse effects”.

The decision meant that the 2.4 million doses of unused AZ Denmark had agreed to buy would be withdrawn.

A link between the J&J vaccine and rare blood clots is also being investigated. Until safety checks are completed, these vaccines will remain unused in the US, which had ordered 100 million doses.

J&J has also been suspended in South Africa, where it had been the vaccine of choice after studies showed it gave higher protection against a local Covid-19 variant.

AZ, which is less effective against the variant, had previously fallen out of favour in South Africa, resulting in – that’s right – unused vaccines.

To stop them going to waste, South Africa sold a million AZ doses for distribution in 14 fellow African nations.

Can these vaccines be used elsewhere?

In theory, yes. Countries are keen to either sell or donate vaccines they no longer need.

On Thursday, the Europe director of the World Health Organization (WHO), Hans Kluge, suggested Denmark was seeking to do just that.

“I understand that the ministry of foreign affairs of Denmark is ready to, or looking already into options, for sharing AstraZeneca vaccines with poorer countries,” Mr Kluge told a briefing.

And some of Denmark’s neighbours offered to snap up the unwanted supplies.

“We still have less vaccines then people willing to be vaccinated,” Lithuanian Prime Minister Ingrida Simonyte said. “Therefore, Lithuania has expressed readiness to take as many doses of AstraZeneca, as Denmark is ready to share.”

In a tweet, Czech Interior Minister Jan Hamacek said he had instructed a diplomat to declare the country’s interest in “purchasing all AstraZeneca vaccines from Denmark”.

Denmark’s response is not yet clear – its government has yet to comment.

In the meantime, those vaccines will be preserved in storage. Both the AZ and J&J vaccines have the advantage that they can be stored at fridge temperature, making them easier to transport than the Pfizer jab, which must be stored at -70 degrees.

That said, vaccines do have a use-by date, which varies depending on the jab’s developer.

How many vaccines are unused?

There’s no global record but regional data provides a snapshot. Denmark, for example, had received 202,920 doses of AZ as of 15 April, figures from European Centre for Disease Prevention and Control (ECDP) show.

The picture is similar across Europe, where a number of countries have limited the AZ and J&J vaccines to older people.

Data from the US Centers for Disease Control and Prevention shows many states have a surplus.

Meanwhile West Virginia, which was using almost all of its allocation, is now seeing more than a quarter of its doses going unused – an average of 350,000 going spare every day, according to Bloomberg.

Health experts say the unused capacity suggests some areas may be running out of residents willing to get vaccinated.

Is there a scheme for sharing spare vaccines?

Yes, there is. It’s called Covax.

It is an international scheme that aims to ensure vaccines are shared fairly among all nations, rich and poor. It is led by the WHO and involves the Global Vaccine Alliance (Gavi) and the Coalition for Epidemic Preparedness Innovations (Cepi).

By the end of 2021, Covax hopes to deliver more than two billion doses to people in 190 countries.

Part of this scheme involves redistributing donations of spare vaccines from rich countries to poor ones.

For example, the UK, which has ordered around 450 million doses, has committed to donating most of its “surplus” supply to poorer countries. Other wealthier countries have made gestures of solidarity with poorer ones.

Yet they have faced criticism because, up to now, none have explained exactly when they will have spare doses and how many they intend to donate.

For the time being at least, rich countries are focusing on vaccinating their own populations, while providing funding for the Covax programme.

How and when might these spare vaccines be shared?

Put simply, we don’t know yet.

The BBC did ask Gavi if it had a record of how many spare vaccines countries have pledged to Covax – this was its response:

“Given the limited supply environment in the near term, doses donated from countries with excess supply, and equitably allocated through the Covax Facility will be an important part of the solution for getting rapid, equitable access globally. We are talking to a number of higher income economies about sharing their surplus doses and expect to announce our first agreements soon.”

So agreements to share spare vaccines are in the pipeline but – frustratingly for many – there’s no concrete information yet on who is getting what.