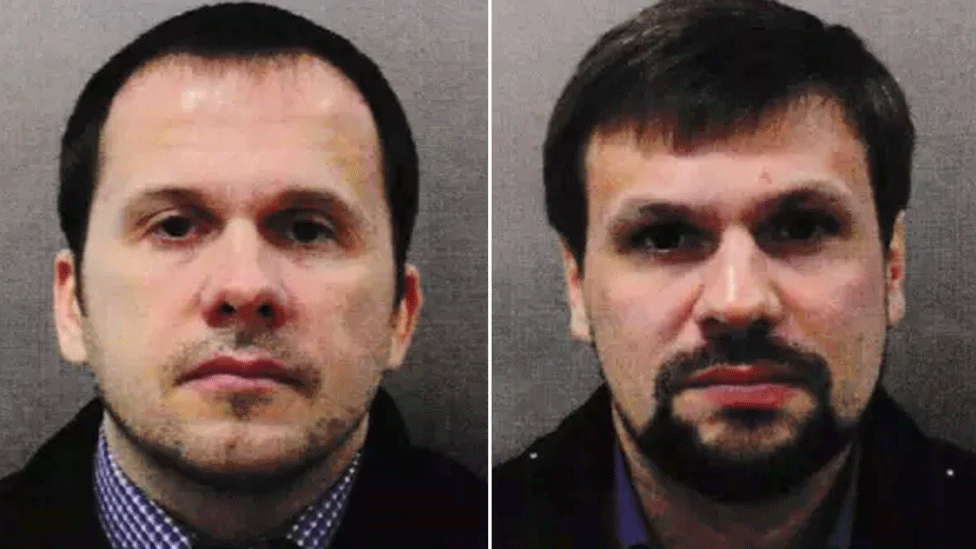 Two Russian men suspected of carrying out the Salisbury poisoning of Sergei Skripal in 2018 are being linked to an explosion at an arms depot in the Czech Republic four years earlier.

Czech police issued photos of Alexander Petrov and Ruslan Boshirov, who they say were in the country at the time of the blast, which killed two people.

The Czech Republic has expelled 18 Russian diplomats in retaliation.

A senior Russian parliamentarian on Saturday called the claim absurd.

Czech Prime Minister Andrej Babis said the country had to react to revelations tying the blast to Russia’s military intelligence service, the GRU.

In a Saturday evening press conference, Mr Babis said the 18 diplomats who had been identified as working for Russia’s intelligence services would have 48 hours to leave the country.

“There is a reasonable suspicion that Russian secret agents of the GRU service were involved in the 2014 explosions of an ammunition dump in the Czech village of Vrbětice,” he said.

At the same time, police issued a request for assistance in searching for two individuals who it said were in the country between 11 October and 16 October 2014, first in Prague and then the area where the arms depot is located.

Czech police are looking for suspects using the identities Alexander Petrov and Ruslan Boshirov in connection with the explosion.

These are the same names used by two Russian intelligence officers the UK says carried out the poisoning in Salisbury, Wiltshire in 2018.

Pictures of them issued by Czech police match those put out by UK police.

After Salisbury, the two men were identified as Alexander Mishkin and Anatoliy Chepiga and subsequently appeared on Russian TV to claim they were sports nutritionists who had visited Salisbury to see the cathedral spire.

However, UK authorities said they were members of the GRU and had smeared a nerve agent, Novichok, on a door handle belonging to Mr Skripal, a former GRU officer.

Mr Skripal and his daughter fell ill but recovered.

A local woman, Dawn Sturgress, died months later after being poisoned by nerve agent in a discarded perfume bottle.

“We are in a situation similar to that in Britain following the attempted poisoning in Salisbury in 2018,” Czech Interior Minister and Foreign Minister Jan Hamáček said when announcing the results of the investigation on Saturday night.

Russia responded by saying that its constitution does not allow its citizens to be extradited.

Russian politician Vladimir Dzhabarov said the Czech Republic’s claims were absurd and that the Russian reaction to the expulsion of its diplomats should be proportionate, the Interfax news agency reported.

The US said it was expelling 10 diplomats from the Russian Embassy in Washington DC on Thursday in response to a cyber-attack as well as other Russian activities. Moscow followed by saying 10 US diplomats would also have to leave.