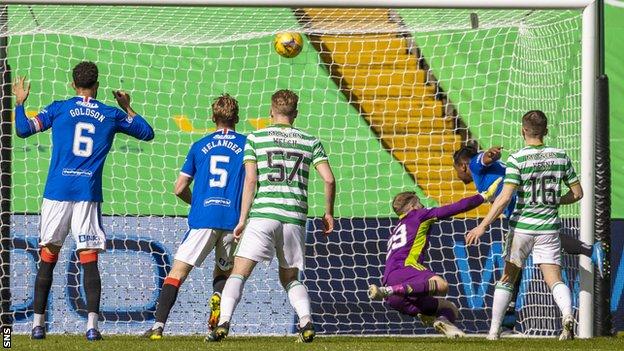 The Scottish Cup last 16 concludes on Sunday with a monumental Old Firm derby at Ibrox.

Rangers are going for the double after clinching their first league title in a decade, while holders Celtic have won the cup four seasons running.

To keep alive their last chance of a trophy this season, Celtic must end Rangers’ 100% domestic home record.

The Ibrox club, who last lifted the trophy in 2009, are unbeaten in the last four derbies, winning three.

John Kennedy has yet to lose in five matches as Celtic interim manager, including a 1-1 Premiership draw at Ibrox last month.

The winners of Sunday’s tie – the Old Firm’s first Scottish Cup meeting since 2016 – will be at home to top-flight rivals St Johnstone in the quarter-final.

Rangers manager Gerrard will make a late call on captain James Tavernier, who has resumed training after being sidelined with damaged knee ligaments since February.

Midfielder Ryan Jack’s season is over because of a persistent calf injury that also rules him out of this summer’s Euros with Scotland.

Celtic winger James Forrest is a doubt, and will be given until the last minute to prove his fitness, after a tight hamstring forced him off last weekend against Livingston.

What are they saying?

Rangers manager Steven Gerrard: “I have been aware that there has been a slight drop-off compared with where we were in the title run-in.

“But I think we have almost been waiting for a fixture that has got an edge and a real importance about it and the preparation has been slightly different this week.

“You can see the focus in the players, see everyone in the zone and really ready to try and put in a top performance at the weekend.”

“There are lots of positives there, but it’s a cup match, you can’t make any mistakes, you have to hit top form.

“We know that going to Ibrox and the magnitude of the game, we have to make sure we are all concentrated and doing our jobs.”