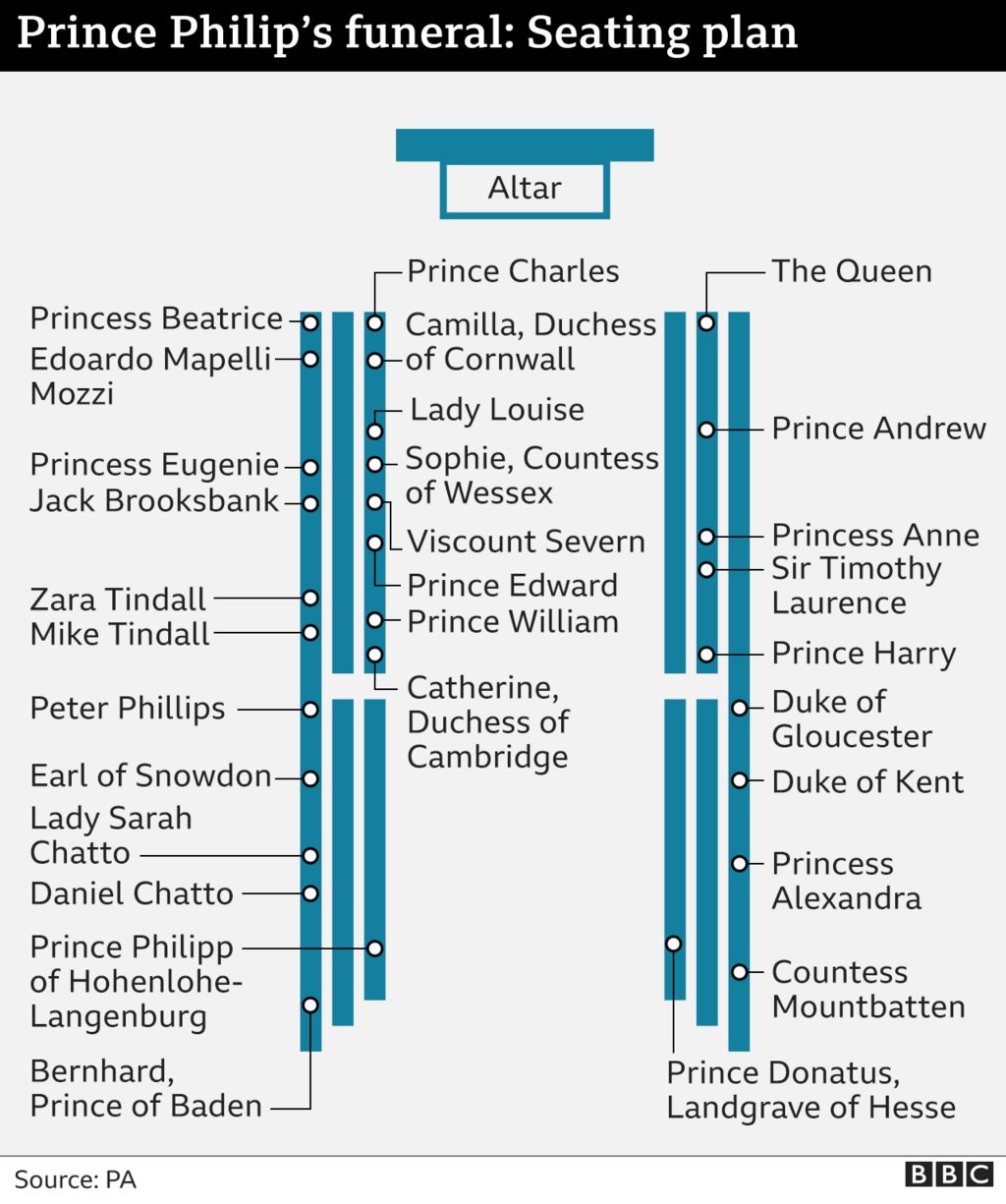 This was nothing like the grand funeral that had long been planned. In normal times there would have been hundreds of guests from around the world joining the Queen and the royal family in mourning the Duke of Edinburgh. But many who knew him made the same observation: that the pared down nature of it was more in keeping with his character.

One aspect of this extraordinary event was unchanged, however, for this was a family that knows the eyes of the world will intrude on their private joys and private sorrows alike.

From the crenellated rooftop of the Round Tower, which dominates the distinctive Windsor sky line, I watched, as silence descended on the Quadrangle beneath the private royal apartments.

It is where the Duke of Edinburgh died and where the Queen has been in residence throughout this period of mourning. To the left sits the monarch’s private chapel, where, in that quiet space, the duke’s coffin has lain for a week.

At just before 14.40 BST, the bearer party, eight officers of the Grenadier Guards, brought his coffin out of the private chapel into the sun: out of its private domain and into the public. It was topped by a wreath of white flowers, his naval cap, and the ceremonial sword given to him by his father-in-law George VI on his marriage to the then Princess Elizabeth.

This was the moment when the private sorrow of a family mourning their loss in their own home became wrapped – by the imperatives of royal duty – into the very public solemnity of regal ceremony and national commemoration.

There were echoes of modern continuities too. The duke’s grandsons, Princes William and Harry, walked behind his coffin just as they had walked, as children, behind the coffin of their mother 24 years ago.

As the Queen sat alone in St George’s Chapel just feet from the coffin of her husband, she did so in the public gaze, a gaze that has followed her throughout her long life and was there again, even at this moment of intense private anguish.

The duke’s direction of his own funeral could be seen in the details. The modified Land Rover that carried this most travelled of men on his last journey was made to his own design. Much of the music had been chosen by him. And the prince who had, in life, frequently expressed exasperation with long sermons had specified before he died – no sermon, no eulogy.

There was something poignant about the unadorned nature of the ceremony. At a grand state occasion with 800 guests, the intimacy of the family at the heart of it can be lost. Not today. The family sat in socially distanced household bubbles, in facemasks, just as countless families across the country have.

And as they watched the coffin being lowered into the Royal Vault, the absence of state pageantry made it easier to see the human beings behind the regal titles – to see the family. For that, and that alone, was what was there – a family, familiar to us all, alone and grieving.

When the service was over, I watched the Queen return to her private apartments by car, accompanied by her lady-in-waiting, Lady Susan Hussey. The other members of the family chose to walk through the bright sunshine, up the hill to the Quadrangle beneath the Round Tower and in front of the private apartments.

The Prince of Wales and Duchess of Cornwall arrived first, casting long, sharply defined shadows on the green of the lawn, followed quickly by the others, Princes William and Harry walking together. The group of 25 or 26 stood in the centre of the lawn for many minutes, all clad in mourning black and, at last, relaxed and smiled as they greeted each other in solace and open affection.

This is a family that knows it must live its life in the public eye. It is the British royal condition, demanded by its subjects who are often transfixed by the mystique of royalty, bound to this family by ties of loyalty and affection that can seem hard to define and articulate. But they are also sometimes unforgiving or simply indifferent.

It is a condition that is bequeathed to them by the ancestors who lie in the vaults beneath St George’s, and which, they, in turn, will pass on to those who follow them.