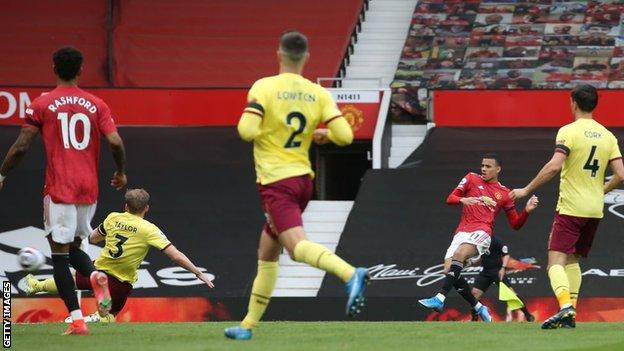 Mason Greenwood says “anything is possible” in the title race after he scored twice to help Manchester United beat Burnley and close the gap on Premier League leaders Manchester City to eight points.

The 19-year-old saw his thumping opener after the break quickly cancelled out when James Tarkowski rose above Harry Maguire to level.

Greenwood put the hosts back in front six minutes from time with a fierce left-footed strike that deflected beyond goalkeeper Bailey Peacock-Farrell at the front post.

Edinson Cavani then tapped in from close range in stoppage time to wrap up the victory at Old Trafford.

The visitors’ direct attacking play had caused United problems of their own and they had the ball in the net after 14 seconds.

Chris Wood beat goalkeeper Dean Henderson to a floated delivery on the edge of the penalty area and headed into an empty goal, only to be correctly flagged offside.

It means Ole Gunnar Solskjaer’s side are now eight points behind leaders City in second place with six games to play, while Burnley remain 17th and six points above the relegation zone.

“You can never be sure,” said Greenwood about United’s hopes of catching their rivals. “They might slip up, we have to concentrate on our next games.

“Anything’s possible, hopefully they drop some points but we just have to keep focused on our games.”

Can United do the unthinkable?

“Can we catch City?” said boss Solskjaer beforehand. “Stranger things have happened in football. Bigger leads have been given away.”

The Norwegian first arrived at Old Trafford the summer after Sir Alex Ferguson’s outfit had overturned a 12-point deficit to pip Newcastle to the title in 1996.

Solskjaer’s own side trailed leaders Manchester City by 14 points last month but have now reduced that to eight with six games to play – the same advantage United boasted when City fought back to win the title on a dramatic final day in 2012.

Had United started the season better the title race may have been even closer, with the Red Devils having lost just once in their past 26 league games after slipping to three defeats in their first six.

They showed the perseverance and patience needed if they are to mount an unlikely title charge after leaving it late to beat Burnley on Sunday.

The club changed the seat coverings at Old Trafford from red to black this week to give a greater contrast to the players’ shirts on the pitch but that could not help the hosts in the first half as they lacked fluidity going forward.

Solskjaer turned to Cavani, in place of Fred, at the break and that extra attacking impetus immediately paid off as Marcus Rashford squared the ball to Bruno Fernandes and the Portugal international cleverly dummied the pass to allow Greenwood to fire beyond Peacock-Farrell.

That lead lasted all of 114 seconds as Tarkowski levelled for Sean Dyche’s side from a corner and it looked as if United may be frustrated once again by the Clarets.

But on 84 minutes Greenwood’s deflected effort squeezed into the bottom corner, making him the club’s joint-top scoring teenager in the Premier League with 15 goals, alongside Wayne Rooney, and earning praise from boss Solskjaer.

“He’s mixing up his game. He goes inside and outside, he’s maturing all the time,” said Solskjaer. “It’s lovely to see. He’s put the work in on the training ground and reaps the rewards.

“I’ve seen how mature he is on the training ground and he plays with maturity and understanding.”

It was a player at the other end of his career who added gloss to the win, with the experienced Cavani tapping in Donny van de Beek’s low pass to seal a victory that sees United match their points tally from last season.

Clarets looking over their shoulder?

Burnley ended a winless run of 20 matches at Old Trafford with victory in this fixture last season and arrived in Manchester looking to become only the second Premier League side to go unbeaten in five away games there, after Chelsea’s run of six between 1994 and 1998.

Dyche’s side stifled the hosts in the first half and posed their own threat with Wood, having already had a goal disallowed, heading Matt Lowton’s smart delivery wide and then almost turning a dropping ball in at the far post.

The visitors produced a superb response to going behind when Tarkowski met Ashley Westwood’s corner to head past Henderson as Manchester United conceded their 1,000th goal in the Premier League era.

But two late goals mean the Clarets have now picked up just one win in their last nine top-flight games and have lost three in a row, dragging them towards the bottom three.

Fulham’s draw at Arsenal means the gap between Burnley and a relegation spot is six points and Dyche will hope that has not narrowed further by the time his side visit Craven Cottage next month.

‘The mentality is strong at Burnley’

Manchester United boss Ole Gunnar Solskjaer to BBC Sport: “You never know, anything can happen in either box. Any time they get a cross in with their quality you’ve got your heart in your mouth. We built some pressure, especially down the left, wanted to do the right things and we got the goals we wanted.

“We knew there’d be long balls, win the first one, win the second one and stop the ball into the box. The delivery was great and we had to work hard again.

“We will keep concentrating on what we’re doing and keep winning. Keep the momentum going.”

Burnley boss Sean Dyche: “The energy and shape of our side was good. You have to get that right at these places. We were pretty tidy with our defending apart from a couple of moments.

“I thought we asked questions and created some really good moments. We were in the game and threatening on the break. We were chasing the game after that and left ourselves exposed.

“The mentality is strong here, you can see that from the players.”

On their relegation battle: “Brighton are there as well – it seems like you never mention them. We’ve worked hard for everything we’ve had in the Premier League.”

The stats – Cavani the super sub

Burnley visit Wolves next Sunday at 12:00 BST, with Manchester United travelling to Elland Road to face Leeds United on the same day at 14:00.