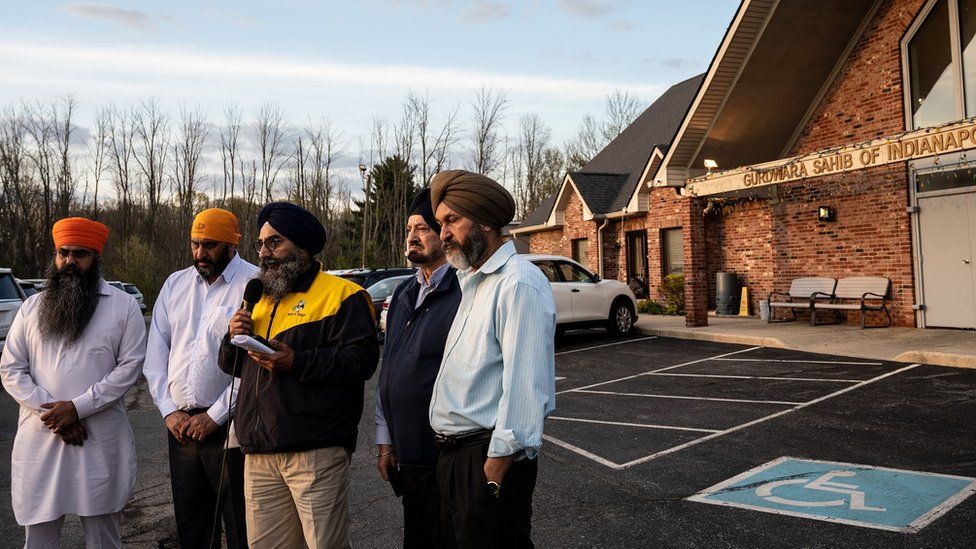 Officials in Indianapolis have released the names of the eight people who were killed when a gunman opened fire at a FedEx warehouse on Thursday night.

Among the victims were four members of the local Sikh community – including a mother, a father and two grandmothers. Other victims include two 19-year-olds, a university graduate and a father.

Local Sikhs say they feel “traumatized” by the attack.

It remains unclear if Sikhs were targeted, authorities say.

About 90% of workers at the facility are members of the local Sikh community, police chief Randal Taylor said.

Here’s what we know about the victims.

Her granddaughter, Komal Chohan, says she is “heartbroken” at the death of her “naniji”, or grandmother.

“I have several family members who work at the particular facility and are traumatised,” Ms Chohan said in a statement released by the Sikh Coalition.

“My nani, my family, and our families should not feel unsafe at work, at their place of worship, or anywhere,” she said. “Enough is enough – our community has been through enough trauma.”

Mr Singh only started working at the FedEx facility this week and had told everyone how excited he was, an in-law, Harjap Singh Dillon, told the New York Times. He said Mr Singh had been working a night-shift sorting mail when the attack happened.

An active member of the local temple, Mr Singh had moved to Indianapolis from California.

“He was a simple man,” Mr Dillon said. “He used to pray and meditate a lot, and he did community service.”

Authorities provided Mr Singh’s age as 68, but his family told the newspaper that he was 70.

A mother of two teenage sons, Ms Sekhon began working at the FedEx facility six months ago on an overnight shift, her niece told the New York Times.

“She was a workaholic, she always was working, working. She would never sit still unless she felt really bad,” her brother-in-law, Kuldip Sekhon, told the Associated Press news agency.

While officials said Sekhon was 48, her relatives said she was 49.

Ms Kaur had been planning to make her “renowned yogurt” to celebrate for her granddaughter’s second birthday at a large family gathering on Saturday, Rimpi Girn, a family member, told the New York Times.

“And today we’re gathering to plan a funeral,” she said.

Authorities said Kaur was 64, but her family told the New York Times she was 50.

Samaria Blackwell was a 19-year-old soccer and basketball enthusiast who dreamed of becoming a police officer.

Her parents, Jeff and Tammi Blackwell, said they were “blessed by the Lord to have such a fun-loving, caring daughter as the baby of our family”, in a statement posted on GoFundMe page launched to fund funeral and other expenses.

“Samaria was tenacious in everything she did, from playing basketball and soccer to being a lifeguard for Indy Parks,” they said. “As an intelligent, straight-A student, Samaria could have done anything she chose to put her mind to.”

Mr Weisert was a former Air Force officer who served in Vietnam and had previously worked as a mechanical engineer “to make ends meet”, his son, Mike Weisert, told the New York Times. Mike Weisert said his father had been thinking of retiring in the coming months.

Mr Weisert’s wife of 50 years, Mary Carol Weisert, told local broadcaster WKRC she felt “terror, horror, fear, shock” at his death. “I don’t know how else to describe it.”

A fan of action and classic movies, he enjoyed playing country and bluegrass guitar, according to the New York Times.

Mike Weisert described his father as “a very decent, kind man, very dedicated to protecting and providing for the ones he loved”.

The recent High School graduate was awaiting her first pay cheque after starting work at the plant two weeks ago, a family member told the newspaper.

“She was a lovely, beautiful and youthful teenage girl,” a family member told the Indianapolis Star. “She had just started to buckle down and get a job and take life a little more serious.”

Mr Alexander was a former Butler University student who had worked at FedEx for several years, according to the Indianapolis Star.

“He was a great kid. He loved to play golf. Had a big heart – always had a smile on his face,” Albert Ashcraft, a former FedEx colleague, told the newspaper.

“The Butler community is mourning the loss of Matthew Alexander, a former student who was killed tragically along with seven others at the FedEx facility in Indianapolis. We want to extend our deepest sympathies to Matthew’s friends and families during this time of great sorrow,” the school said in a tweet.