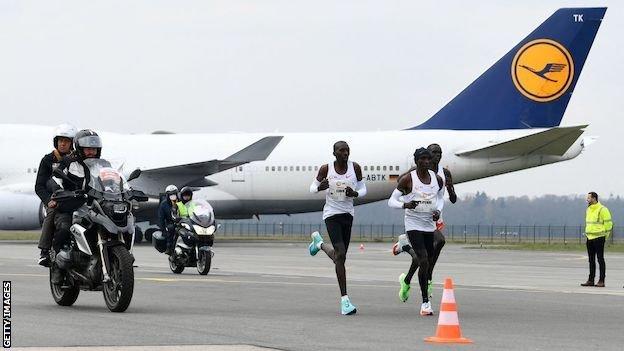 Eliud Kipchoge won the NN Mission Marathon in his final race before he defends his title at the postponed Tokyo 2020 Olympics.

The Kenyan, 36, clocked two hours, four minutes and 30 seconds in his first outing since his shock defeat at last year’s London Marathon.

The invitation-only race took place at Twente Airport in the Netherlands.

It was originally due to take place in Hamburg on 11 April, but local Covid-19 restrictions meant it could not be staged in the German city.

“It’s mission accomplished. Thank you to the great men and women who organised this race in less than 10 days,” said Kipchoge.

“It was in a different environment, in the midst of a pandemic, to tell people you can still run.

“This was the real test towards the Tokyo Olympics, to test your fitness.”

World record holder Kipchoge lost a marathon for the first time since 2013 in October 2020 in London, despite being a four-time champion and the favourite to win in St James’s Park.

Prior to the NN Mission Marathon, he said he had not changed his training regime since the defeat but that it had taught him how to run without fans, with both taking place on loops closed to the public because of the coronavirus pandemic.

Fans from overseas have been banned from the Tokyo Olympics, where the men’s marathon is scheduled to take place in Sapporo on 8 August.