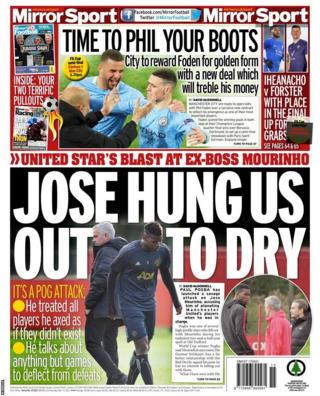 Chelsea are interested in signing England midfielder Jude Bellingham, 17, from Borussia Dortmund, who rate him as a £100m player. (Eurosport)

Arsenal are interested in Inter Milan‘s 20-year-old Uruguayan forward Martin Satriano, who is also being tracked by Chelsea and Manchester City. (Mail)

Bayern Munich and Austria defender David Alaba, 28, has a deal in place to join Real Madrid as a free agent this summer, but the Spanish side will not announce it until after the season. (Marca)

Paris St-Germain boss Mauricio Pochettino is optimistic Brazil forward Neymar, 29, and France forward Kylian Mbappe, 22, will be at the club next season. (Cadena SER – in Spanish)

Arsenal and Uruguay midfielder Lucas Torreira, 25, who is currently on loan at Atletico Madrid, has said he wants to join Boca Juniors on loan. (Perfil Bulos, via Sun)

Barcelona president Joan Laporta says he is convinced that Argentina striker Lionel Messi, 33, wants to stay at the club. (Deportes Cuatro, via Sport)

Eintracht Frankfurt forward Andre Silva, who is a target for Manchester United and Atletico Madrid, does not have a release clause in his contract. (Goal)

Barcelona were also tracking Silva but have decided against signing the 25-year-old Portugal international. (Mundo Deportivo – in Spanish)

Liverpool are holding firm in contract talks with 30-year-old Georginio Wijnaldum, meaning the Netherlands midfielder could leave at the end of the season. (Liverpool Echo)

RB Leipzig’s France Under-21 centre-back Ibrahima Konate, 21, says he has not heard from Liverpool despite being repeatedly linked with the Premier League champions. (Bild – in German)

Real Madrid striker Karim Benzema, 33, is close to extending his contract until 2023. (Marca)

Croatia midfielder Luka Modric, 35, has accepted a lower salary to sign a new one-year deal with Real Madrid. (AS)

The back page of Saturday’s Mirror