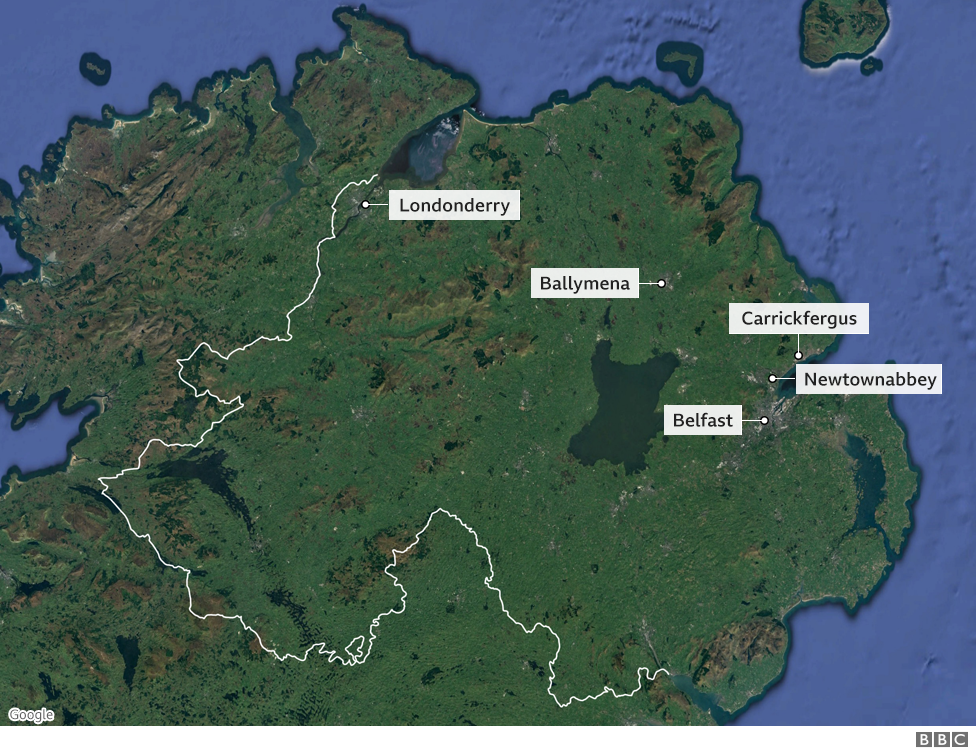 More than 50 police officers have been hurt and 10 people arrested as a result of rioting over the past 10 days, in several towns and cities across Northern Ireland.

The UK and Irish prime ministers have condemned the violence, and Northern Ireland’s government met on Thursday to call for an “immediate and complete end” to the unrest.

All Northern Ireland’s main parties have condemned the rioting, although they are divided over its causes.

Where has the violence been happening?

Violence involving gangs of people as young as 12 started on 29 March in an area of Londonderry that is loyalist – in favour of keeping Northern Ireland as part of the United Kingdom.

Since then, there have been protests and rioting on a near-nightly basis in a number of towns and cities, including Belfast, Carrickfergus, Ballymena and Newtownabbey.

The rioting has largely seen loyalist youths throwing bricks, fireworks and petrol bombs at lines of police officers and vehicles.

A gate that divides the two was smashed open and, during several hours of disorder police officers and a press photographer were attacked and a bus was hijacked and burned.

Parts of Northern Ireland are split along sectarian lines, 23 years after a peace deal largely ended Northern Ireland’s Troubles – which lasted almost 30 years and cost the lives of more than 3,500 people.

Who is behind the unrest?

While there are no clear indications the unrest is being orchestrated by an organised group, the violence has been concentrated in areas where criminal gangs linked to loyalist paramilitaries have significant influence.

There is increasing evidence that senior figures in organisations such as the Ulster Defence Association and Ulster Volunteer Force are allowing the trouble to proceed.

Analysts suggest loyalist paramilitaries of the South East Antrim UDA may have exploited an opportunity to kick back at the Police Service of Northern Ireland after a recent clampdown on criminality in the area around Carrickfergus.

The paramilitary group is involved in many forms of organised crime, doing “untold damage to the community and exerting fear in neighbourhoods”, say police.

What has this got to do with Brexit?

The new trading border is the result of the Northern Ireland Protocol, introduced to avoid the need for a hard border on the island of Ireland.

It avoids the need for checks on the Irish border, as EU customs rules are enforced at Northern Ireland’s ports instead.

Unionists say it damages trade and threatens Northern Ireland’s place in the UK.

In January, graffiti opposing the Irish Sea border was daubed on walls in some loyalist areas, including parts of Bangor, Belfast, Glengormley, and the home of one of Northern Ireland’s main ports, Larne.

These Brexit checks were temporarily suspended amid reported threats against port workers in Larne and Belfast – although the police later said there was no evidence of “credible threats”.

In March, a group which includes representatives of loyalist paramilitaries wrote to Boris Johnson to withdraw its support for the Good Friday Agreement, the 1998 deal that effectively ended the Troubles.

The Loyalist Communities Council said it was temporarily withdrawing its backing because of concerns about the protocol.

Are there other political factors involved?

Some unionist leaders have attributed the violence to the decision not to prosecute leaders of the republican Sinn Féin party for breaching Covid regulations at the funeral of a former IRA intelligence chief last June.

Bobby Storey’s funeral drew 2,000 mourners – including Deputy First Minister Michelle O’Neill – at a time when strict Covid restrictions were still in place, limiting the number of people who could gather in public.

Many people expressed anger at Ms O’Neill for failing to follow the guidance she insisted the public should follow – guidance which had led to loyalist band parades being cancelled last summer.

Some have accused police of double standards after the Public Prosecution Service (PPS) said there would be no prosecutions.

Mr Byrne said he recognised people were angry, but has refused to step down.

Calling for the ongoing street disorder to stop on Wednesday night, Mr Byrne said he was “open to dialogue with anyone who is willing to work with me to resolve the issues facing our community”.

Addressing the rioters, he tweeted: “Go home before someone is seriously injured. Violence is not the answer.”

Mr Byrne briefed Stormont’s power-sharing executive on the disorder at an emergency meeting on Thursday.