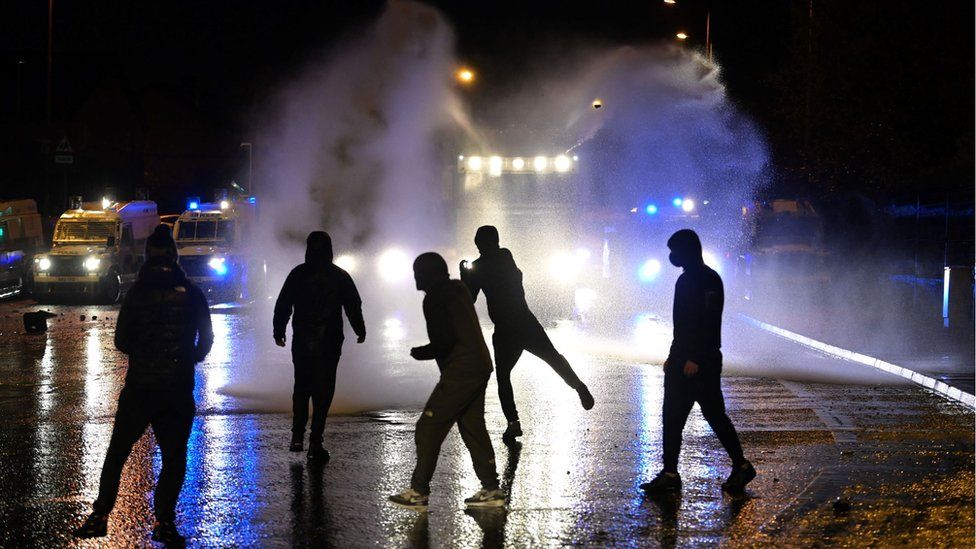 Police deployed water cannon for the first time in six years in Northern Ireland after coming under attack in a further night of rioting in Belfast.

Crowds rioted on both sides of an interface that separates a loyalist area and a nationalist area in west Belfast on Thursday night.

Petrol bombs, fireworks and stones were again used to attack police, who have faced rising disorder since 29 March.

NI’s secretary of state is set to meet political leaders later on Friday.

Brandon Lewis is in Belfast for talks after more than a week of nightly attacks on police in several areas of Northern Ireland.

The recent disorder began with petrol bombs and sporadic attacks in a number of mainly loyalist areas, but the unrest spread to a Belfast interface.

For the past two nights, officers were deployed to quell riots on either side of a so-called peace wall in the west of the city.

Crowds attacked police and each other at the junctions of Lanark Way (off the mainly loyalist Shankill Road) and the mainly nationalist Springfield Road.

By Thursday morning, police had confirmed 55 officers in total had been injured over the past week.

It is not yet known if any were injured in Thursday night’s violence, which saw police escalate their response with the deployment of water cannon in a bid to disperse rioters.

Prime Minister Boris Johnson and Irish Taoiseach Micheál Martin have spoken over the phone and called for a calming of tensions.

The US has also appealed for calm, with the White House saying it was concerned by the violence.

It is understood the Police Service of Northern Ireland’s Chief Constable Simon Byrne will also be on the call with Mr Lewis and political leaders on Friday.

He will provide an assessment of the latest attacks on his officers.

‘Brexit not an excuse’

The violence in Carrickfergus and Newtownabbey over the Easter weekend was linked to police operations targeting the South East Antrim UDA, a paramilitary group involved in organised crime.

Mr Lewis, who travelled to Belfast on Thursday, has denied that the UK government has abandoned unionists through the new Brexit arrangements.

“Brexit is not an excuse,” she added.

In a tweet on Thursday night, Justice Minister Naomi Long said it was “utterly reckless and depressing to see more violence at interface areas tonight”.

“My heart goes out to those living in the area who are living with this fear and disturbance.”

My heart goes out to those living in the area who are living with this fear and disturbance.

This needs to stop now before lives are lost. https://t.co/d1xKUIoGaM

The Green Party has called for a special meeting of Belfast City Council to be held “to discuss the serious violence which has occurred in our city over recent days”.