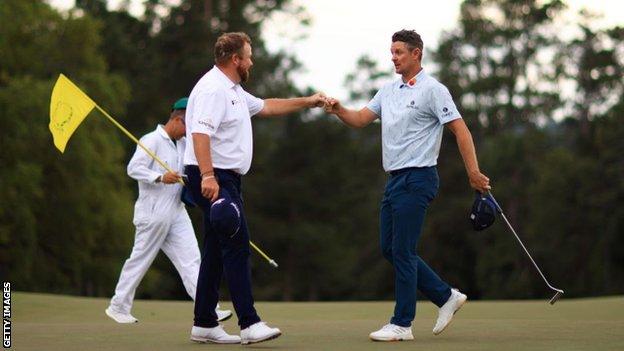 England’s Justin Rose accelerated away from the field to finish on seven under par and open a four-stroke lead on the opening day of the Masters.

Hideki Matsuyama and Brian Harman had set the early pace at three under par as the only other players to break 70.

Two-time runner-up Rose was two over after seven, but an eagle followed by seven birdies saw the 40-year-card a sensational 65 at Augusta National.

Defending champion and world number one Dustin Johnson is at two over par.

Northern Ireland’s Rory McIlroy and England’s Lee Westwood were among those who struggled to tame the iconic Georgia course, finishing on four over and six over, respectively.

Tommy Fleetwood was also having a tough round but he had a hole-in-one on the par-three 16th, having also made an ace at the WGC Matchplay last time out, on his way to a two-over 74.

Only 12 players shot under par on the opening day, with England’s Tyrrell Hatton and Ireland’s Shane Lowry among them at one under.

Rose has history at Augusta. He finished tied for second in 2015 and was beaten in a play-off by Sergio Garcia in 2017.

He arrived this week having not played since withdrawing from the Arnold Palmer Invitational a month ago with a back problem.

The world number 41 made a bogey start and followed with another dropped shot at seven, before an eagle at the par-five eighth saw the 2013 US Open champion burst into life.

Rose, who has recently reunited with swing coach Sean Foley, birdied the following two holes, saved par on 11 and continued his momentum with five more birdies in his final seven holes to post his best score in 59 rounds at the Masters.

It is a familiar position for the 2016 Olympic champion, who has now held the first-round lead at Augusta National on a record four occasions, level with six-time winner Jack Nicklaus.

“I guess the good news is I don’t know what happened and that’s what happens when you’re playing freely,” he said. “I didn’t panic when I was two over, that’s the most important thing.

“Even though I saw red numbers on the board I knew it was a good day not to play myself out of the tournament. Of course, nine under coming through the final 11 holes, you never see that coming at Augusta.

“You play off memory banks. You have to respect the course. It was a fun experience playing in November but it is a golf course that plays different at different times. There was a swirling wind out here, but there were a lot of situations that reminded me of Augustas of years past.”

Last week Jordan Spieth won the Texas Open to end a losing run that stretched back to his win at the 2017 Open Championship, and the 2015 Masters champion did not go under the radar on Thursday.

The 27-year-old arrived at the ninth on one under par after two birdies and a bogey but he walked off the green on two over after a triple bogey.

He sent a wayward drive into the trees on the right, clattered his next shot off a trunk and finally managed to escape with a four iron that came up just short of the green.

He kept his composure though and pulled one shot back on the 10th and then chipped in for eagle on the 15th to finish on one under par.

World number two Justin Thomas ended the day one over, while US Open champion Bryson DeChambeau, who previously said he sees Augusta as a par 67, finished at four over par.

Debutant Will Zalatoris signed for a 70 that puts him at two under par alongside fellow Americans Webb Simpson and 2018 champion Patrick Reed, as well as South Africa’s Christiaan Bezuidenhout.

Augusta bites for the majority

This is the first major to be played with spectators since the 2019 Open Championship at Royal Portrush, with around a quarter of the up to 50,000 patrons usually welcomed at Augusta National in attendance.

The past two Masters have yielded the lowest average scores in the iconic major’s history but firm greens and gusty conditions caused problems for some on Thursday.

Among those was McIlroy, who endured his customary slow start as he carded three bogeys on the bounce through five, six and seven, with his wayward approach on the latter even hitting his dad, Gerry, on the leg.

The Northern Irishman is chasing a career Grand Slam and has begun working with renowned swing coach Pete Cowen in a bid to regain form after sliding to 12th in the world rankings.

He followed that run of bogeys with a birdie at the par-five eighth, but dropped another shot at nine to hit the turn at three over and then found the water at 11 and 13.

The 31-year-old rolled in a birdie from four feet at the par-five 15th to pull one back and finished with three successive pars to post a four-over 76.

He was able to make the most of soft conditions to win his second major title in the autumn but made a bogey-birdie start to his defence and was one over for the front nine after dropping a stroke on the fifth.

The 36-year-old, who had only four bogeys all week when he won, looked to have kickstarted his round with a chip-in birdie from 17 yards on the 11th and added another birdie at the par-five 13th to get to one under.

But he bogeyed 16 and then watched a bogey putt on 18 lip out from four feet, eventually signing for a two-over-par 74.

Johnson was playing alongside Westwood, who arrived in Georgia with son Sam on his bag as one of the game’s form players, having already carded two second-placed finishes in 2021.

But a double bogey on the third set the tone for the 47-year-old, who was being talked up this week as someone who could break Nicklaus’ record as the oldest Masters champion.

The former world number one is yet to win a major and faces a monumental task if he is to break that duct, with a further six bogeys and two birdies leaving him well off the pace at six over.

Elsewhere, Ian Poulter made seven bogeys and five birdies to finish at two over, alongside Scottish debutant Robert MacIntyre, with fellow Englishman and 2016 champion Danny Willett and Wales’ 1991 winner Ian Woosnam two further back at four over.

English amateur Joe Long, who tore a glute muscle while surfing with a friend in the build-up to Augusta, struggled on his debut and finished on 10 over par.