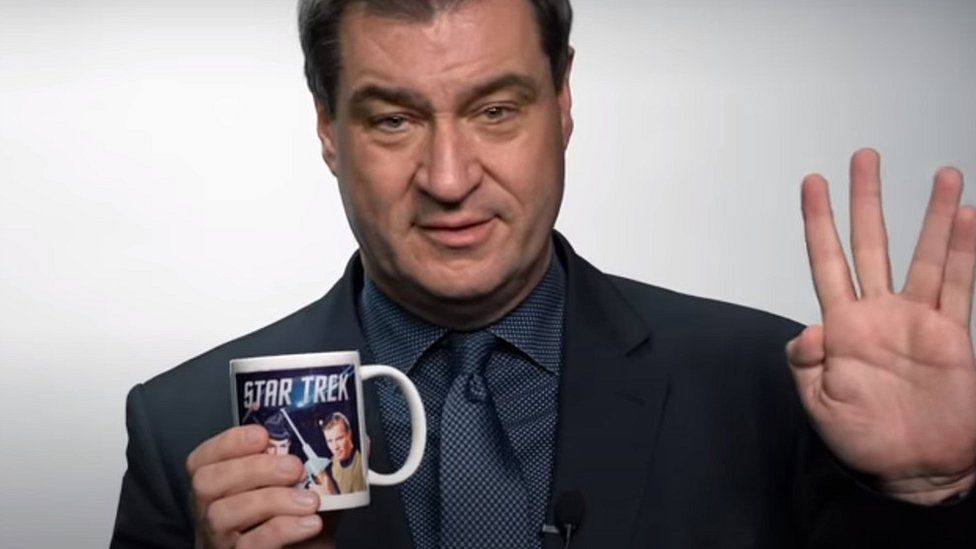 “Space… the final frontier.” Bavarian premier Markus Söder knows the immortal words from Star Trek well, but his journey may end up in the chancellor’s office in Berlin.

Angela Merkel has dominated German politics since 2005, but she will no longer be chancellor after the September federal election. Mr Söder is seen as the hot favourite to run as chancellor-candidate for her Christian Democrats (CDU) and their smaller Bavarian ally, the Christian Social Union.

If he makes it to the chancellery it will be something of a revolution in German politics: a conservative CSU candidate has never held the reins of power in Berlin before. But Mr Söder, the leader of Germany’s largest state, has not yet put himself forward officially.

Two previous attempts by CSU leaders failed: Franz Josef Strauss in 1980 and Edmund Stoiber in 2002 were both defeated by the centre-left Social Democrats.

However, the coronavirus pandemic has convulsed Europe, making its politics even more volatile than before. And so far Mr Söder has proved popular in the crisis, even though Bavaria’s Covid figures are no better than those of most other German states.

A decision on the CDU/CSU chancellor-candidate is expected before late May.

Yet Mr Laschet has great political influence as leader of the CDU, the senior partner in the centre-right alliance. A former Euro MP, he is also well-connected internationally.

The choice rests with the most powerful CDU and CSU politicians, including Chancellor Merkel, though some party members argue for a ballot of all the alliance’s MPs.

In a video on his official website Mr Söder shows off a Star Trek mug – a gift from his wife Karin Baumüller-Söder – and gives the Vulcan salute from the hit sci-fi series.

It makes sense for him to tout his sci-fi credentials: Bavaria, in Germany’s south-east, boasts some 550 aerospace businesses, though it also prides itself on traditions, such as the Oktoberfest and Fasching carnival.

In 2018 Mr Söder launched a 10-year investment plan called Bavaria One to make Bavaria Germany’s top location for aerospace. The sector already employs more than 60,000 people in Bavaria and is developing its own university campus at Taufkirchen/Ottobrunn, the state government says. The project’s logo features Mr Söder’s face.

Mr Söder has spent decades in CSU politics – he joined the party in 1983. And before becoming state premier in March 2018 he had a succession of top ministerial posts in Bavaria.

But in the 1990s he was a journalist at Bavarian public broadcaster BR – experience that appears to have made him quite media-savvy and strong on presentation. In an age of social media that is a significant talent.

What made him a rising star?

“He’s a political animal who lives for politics – he’s known to have few private friends or hobbies, apart from sci-fi films,” said Roman Deininger, a Süddeutsche Zeitung journalist who has written books about Mr Söder and the CSU.

In his official video, Mr Söder – a father of four children and married since 1999 – exudes a wholesome lifestyle, playing tennis, cycling, swimming and preferring Diet Coke to alcohol.

His wife Karin is an influential businesswoman at an electrical engineering firm, Baumüller Group.

Both have been prominent in Bavarian public life for years and are regularly pictured at carnivals, with Mr Söder posing in drag in 2007 and as Mahatma Gandhi in 2015.

But the best-known Bavarian celebration – Oktoberfest – was overshadowed by the pandemic last year and Mr Söder has said he doubts it will go ahead this year.

Roman Deininger told the BBC that the pandemic had won Mr Söder many converts nationally.

That is no small achievement, as some Germans tend to see Bavarians as lederhosen-clad country folk, despite the state hosting Siemens, Bayern Munich and many other German success stories.

“He doesn’t win hearts, he wins people round. Without coronavirus he would not be a candidate,” Deininger said.

“His style suited the time: his clear communication, he was a bit authoritarian, old-fashioned, but in the pandemic this was very appropriate. Many people wanted strong, clear leadership.”

Mr Söder has stood firmly by Mrs Merkel’s side in recent weeks as she struggled to impose her will on some German regions, whose politicians rejected diktat from Berlin. Under German law, public health policy is largely in the hands of the state governments.

Conscious of the continuing economic damage, Mr Laschet was among those resisting Mrs Merkel’s call for a short, sharp, national lockdown to beat the current third wave of infections.

In contrast, Mr Söder teamed up with Winfried Kretschmann, the popular veteran Green Party premier of neighbouring Baden-Württemberg, in a joint plea for regions to respect the Covid “emergency brake”. The brake requires regions to enforce curfews, social distancing and other measures when the infection rate goes above 100 per 100,000 inhabitants.

They sounded the alarm, saying “we must not spend more time discussing – the virus doesn’t forgive hesitation”.

Opinion polls suggest the Greens have surged to second place nationally, just a few points behind the CDU/CSU.

For years Baden-Württemberg, once a CDU stronghold, has been governed by a Greens-CDU coalition. So Mr Söder’s move can be seen as timely, as many expect the two conservative allies to go into coalition with the Greens after the September election.

These are worrying times for Angela Merkel’s party – it lost last month in both Baden-Württemberg and the state of Rhineland-Palatinate. All the more reason why it might prefer a Bavarian enjoying a surge in national popularity.

Mr Söder has reinvented himself politically since 2018, according to Deininger. He became Bavarian premier in that year, but the CSU did poorly at the polls. He had to share power with the small conservative Free Voters party.

So these days he echoes the Greens’ appeals to decarbonise the economy and tackle climate change.

A few years ago he criticised so-called “asylum tourism”. He also said classrooms should have crucifixes but no headscarves, echoing the rhetoric of far-right Alternative for Germany (AfD). He was a prominent critic of Mrs Merkel’s open-door immigration policy.

But the AfD appears less of a threat to Mr Söder now – the pandemic, not immigration, is the new scare for voters. So Mr Söder is showing his pragmatism again, Deininger says, by avoiding anti-immigration rhetoric.

As a wily “political animal” Mr Söder will not underestimate Armin Laschet, however. And in this bruising year, a CDU/CSU-led federal government after September is no foregone conclusion, either.