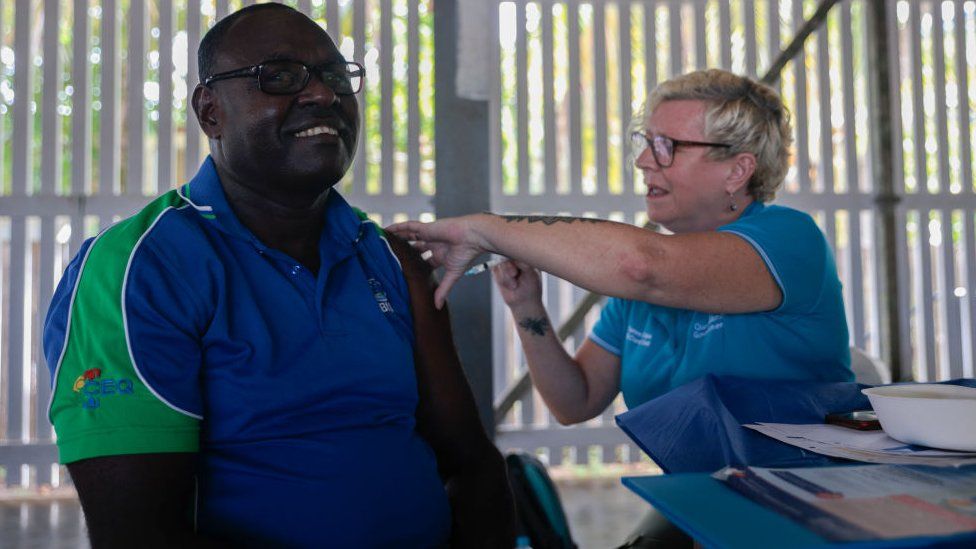 Australia’s vaccine rollout is to be further delayed after local regulators advised limiting use of the AstraZeneca shot – the country’s main vaccine.

On Thursday, the government said it now recommended that people aged under 50 get the Pfizer jab over AstraZeneca’s.

It follows restrictions in other nations, after Europe’s drug regulator found a rare blood clot risk linked to the vaccine.

The move is likely to delay a goal to vaccinate all Australians this year.

The country is already running about 85% behind schedule – it has inoculated about one million of its almost 26 million people so far.

But so far, Australia has received only about one million Pfizer shots – with the rest to arrive “by the end of the year”, the government has said.

The change has sparked alarm among Australians about a vaccine shortfall, and upended projections for border re-openings.

Critics have condemned the government for “putting all their eggs in one basket”, and argue it has undermined confidence in the AstraZeneca dose across all age groups.

AstraZeneca said it respected the decision taken by Australian regulators. It said tens of millions of people had received its dose globally and the blood clot risk was considered a rare side effect.

“We note that the current situation Australia with very low to no community transmission of Covid-19 was a factor in this updated recommendation,” it said.

In the UK, the Joint Committee on Vaccination and Immunisation (JCVI) – the group of experts who advise how vaccines should be used – is now recommending healthy people under 30 be offered a different vaccine.

Australian regulators said early studies suggested that blood clotting may occur in approximately four to six people for every one million, but noted higher rates had been reported in Germany and Scandinavia.

How will the rollout be affected?

Australia began its inoculation programme in February, later than many nations. It is in stage two of a five-stage rollout, where the dose is being offered to more vulnerable sections of the population.

It has reported one blood clotting case related to AstraZeneca vaccine, but echoes European regulators in saying the risk is extremely low.

On Wednesday, the European Medicines Agency said it found rare cases of blood clots among some adult vaccine recipients, but said the benefits outweighed the risks.

On Thursday, Australian medical authorities said given the lack of Covid transmission locally, the nation would err on the side of caution and advise against giving AstraZeneca doses to some age groups.

Chief Medical Officer Paul Kelly said AstraZeneca’s vaccine would only go to adults younger than 50 when the benefit clearly outweighed the risks.

He said those who had already received their first dose without side effects could “safely be given their second dose”, and people over 70 would continue to get the shot.

But with about 12 million Australians aged 16-49, concerns have been raised that Australia does not have access to enough vaccinations.

Prime Minister Scott Morrison said Australia was in talks to increase its Pfizer order. The current Pfizer contract only allows for 10 million people to be fully vaccinated.

Meanwhile the Novovax vaccine is still in the trial period, and has not been approved for use anywhere in the world.

Why is Australia in this situation?

Australia was relying on its AstraZeneca contract of 54 million doses to cover most of its vaccine needs.

The government pledged in January to have everyone vaccinated by October, in large part through local manufacturing of the AstraZeneca vaccine.

The Labor opposition has condemned the government for failing to have more contingency plans.

Labor questioned why Australia had failed to secure supplies of the Moderna and Johnson and Johnson vaccines – which are being used in Europe and North America.

Critics have also accused the government of not being transparent about vaccine supplies.

Earlier this week, Mr Morrison blamed the rollout’s delay on the European Union blocking AstraZeneca shipments from going to Australia – but this was denied by the EU.