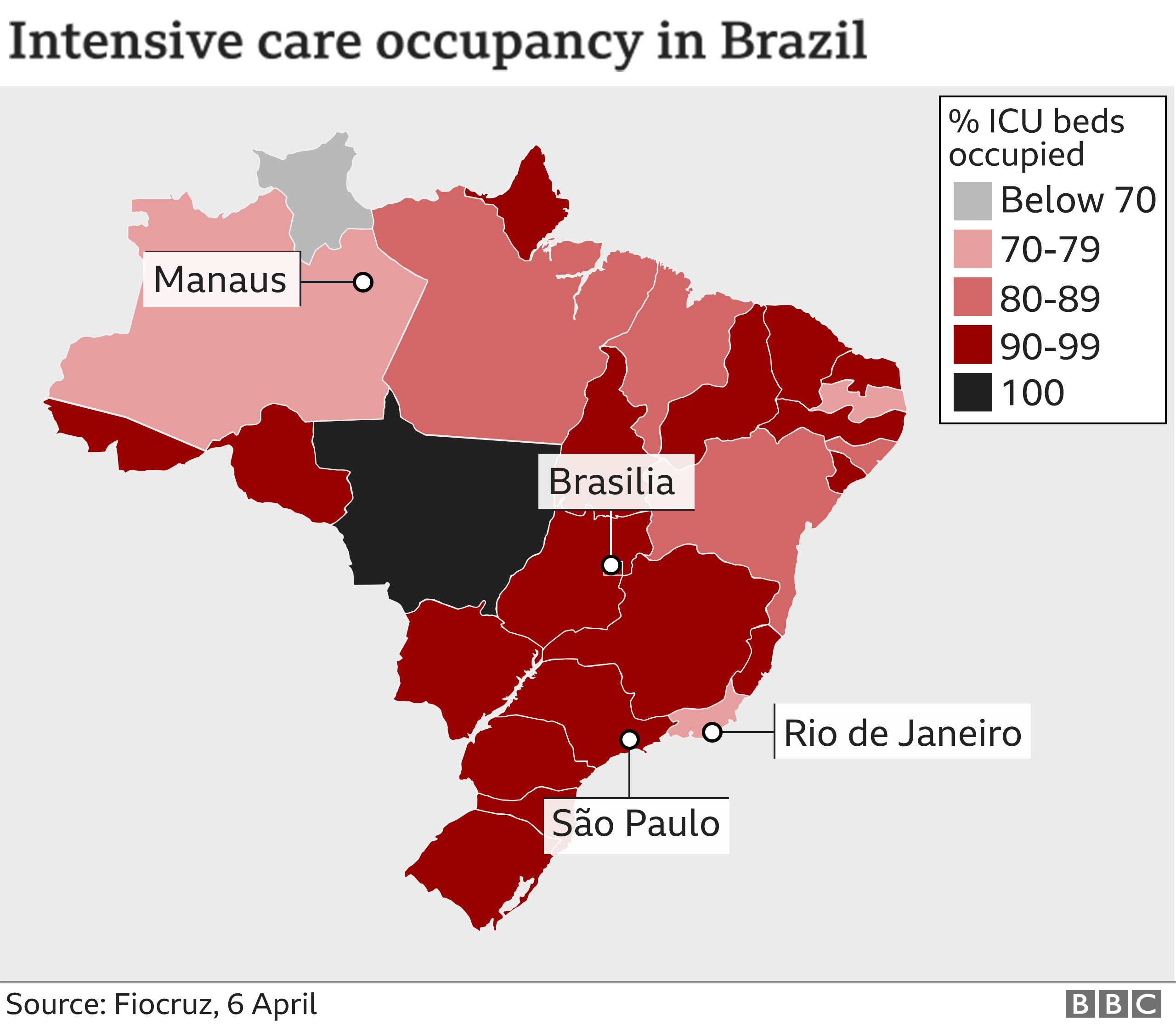 Brazil has recorded more than 330,000 deaths from Covid, second only to the United States, and experts are warning the current surge in cases may not peak for several weeks.

The rapid spread of a coronavirus variant first discovered in Brazil has been a major cause for concern around the world.

President Jair Bolsonaro has consistently played down the severity of the virus, but he is now turning his focus to the nationwide vaccination drive which his critics say has come far too late.

What has Bolsonaro said about Covid?

The president has been highly sceptical about the need to take decisive action to tackle the pandemic:

He continues to oppose lockdowns, but his government has now stepped up its drive to vaccinate the country’s population of more than 200 million people.

So how does Brazil’s record compare with the rest of Latin America and the world?

One in four global deaths

Brazil has by far the highest overall death toll in Latin America.

In recent weeks, it has accounted for around one in four of reported Covid deaths worldwide.

It remains behind Peru and Mexico as a proportion of overall population, but daily deaths are rising rapidly in Brazil.

Twice the number of people died in March than in any other month of the pandemic, and the upward trend has continued, as a more transmissible variant drives infections.

A recent estimate from the University of Washington predicted that Brazil could see a total of more than 500,000 deaths by July.

Regional leaders say mixed messaging and a resistance to lockdowns at the national level has made local restrictions harder to enforce.

Hospital intensive care beds in many states across the country are full or close to capacity.

Dr Miguel Nicolelis, a Brazilian professor of neuroscience at Duke University, told the BBC: “The country is in a nationwide hospital collapse right now – it’s the first time in history the public health system has collapsed.

“If we can acquire the vaccine in large quantities we could at least mitigate the situation.”

Brazil has had a strong record in conducting vaccination campaigns and compared with many other countries in Latin America, it has a well-established healthcare infrastructure.

But its coronavirus vaccination efforts have lagged behind those of Chile and Uruguay who top the table in the region.

Public confidence in the vaccines in Brazil is among the highest in the world, but supply has been slow.

Brazilian microbiologist Natalia Pasternak says: “We have a great immunisation programme, one of the best in the world. If we have enough doses, we know what to do, we have the expertise and the structure. We just need vaccines.”

Only around half the target of 46 million vaccine doses were delivered by the end of March.

Brazil has now ordered enough doses to vaccinate its entire population – but critics say these agreements have come far too late, as other large countries with similar purchasing power are now ahead in the queue.

In August, Brazil’s government turned down an offer from Pfizer to purchase up to 70 million doses of its vaccine.

It has recently ordered 100 million doses of Pfizer’s vaccine, but the bulk of these will not arrive until the second half of the year.

The government has also ordered 100 million doses of the vaccine produced by Chinese firm Sinovac, despite President Bolsonaro criticising it in the past.

In November, he said the halting of trials of the vaccine in Brazil was a “another victory for Jair Bolsonaro”.

Brazil has in-country production of the Oxford-AstraZeneca vaccine, which the government says will eventually provide millions of jabs – but a lack of the active ingredients needed to make the vaccine means that initial production in Brazilian labs has been limited.

The dangers posed by Brazilian variants

Brazilian public health institute Fiocruz says it has detected 92 variants of coronavirus in the country.

In particular, the P.1 variant has become a cause for concern because it is thought to be much more contagious than the original strain and has been spreading across Latin America and the world.

Scientists believe the current vaccines should still work against the Brazilian variant, although perhaps not quite as well, and new variants could emerge in the future that are different again.

Dr Nicolelis says: “Brazil is not only the epicentre of the pandemic worldwide, it’s a threat to the entire effort of the international community to control the pandemic. We are brewing new variants every week.”