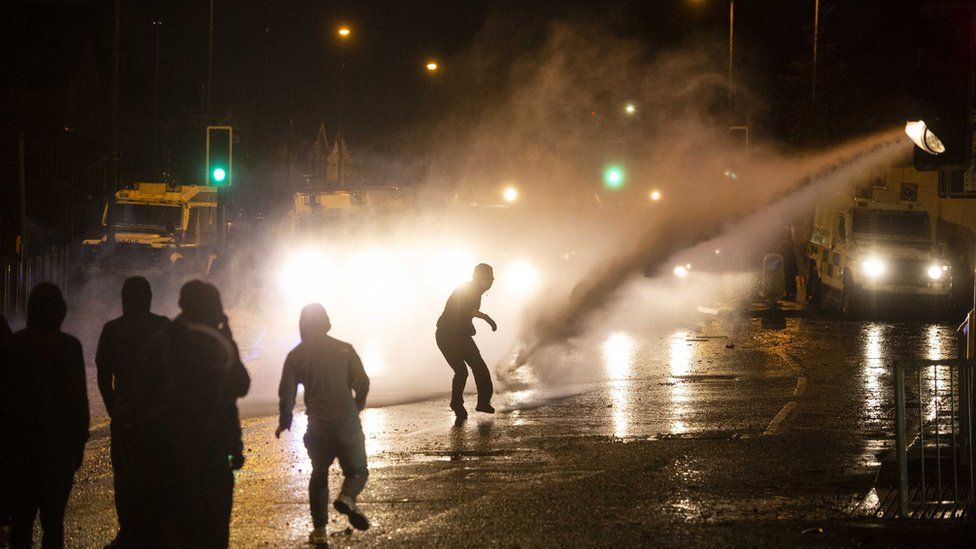 Petrol bombs, fireworks and stones have been thrown at police during another night of violence in Northern Ireland.

It follows rioting on Wednesday night which police said was on a scale not seen in Northern Ireland in years.

Crowds rioted on both sides of an interface between loyalist and nationalist areas in west Belfast.

Police deployed water cannon in a bid to stop the violence – the first time in six years they have done so in a riot situation.

They urged people to avoid the Springfield Road area of the city.

Prime Minister Boris Johnson and Irish Taoiseach Micheál Martin have spoken over the phone and called for a calming of tensions.

The US has also appealed for calm, with the White House saying it was concerned by the violence.

“Violence achieves nothing. It brings fear and worry to the doors of local residents who deserve so much better. This needs to stop,” she said.

In a tweet, the Alliance Party leader said that the violence “needs to stop before lives are lost”.

“My heart goes out to those living in the area who are living with this fear and disturbance,” added Mrs Long.

The Green Party has called for a special meeting of Belfast City Council to discuss “the serious violence which has occurred in our city over recent days”.

Meanwhile, Ulster Unionist Member of the Legislative Assembly (MLA) Doug Beattie said that “the sad thing is that we will all just become immune to this disgraceful, shameful behaviour”.

He added that “the momentum will be hard to stop if we don’t stop it now”.

Colum Eastwood MP, leader of the Social Democratic and Labour Party (SDLP), said: “This needs to stop now. There is absolutely no justification for destroying your community. Violence has never solved anything. Go home.”

Earlier, Mary Lou McDonald, president of Sinn Féin, urged young people “to please leave the area and for parents to contact their children”.

“There can be no repeat of last night’s event, the people of our community deserve better.”

During several hours of violence on Wednesday night, police officers were attacked, petrol bombs were thrown and a bus was burnt.

In recent days, more than 50 police officers have been injured.

On Thursday an emergency meeting of the Northern Ireland Assembly was held to discuss the ongoing disorder.

Northern Ireland’s executive has said it is “united behind law and order” after consecutive nights of “deplorable” violence.

On Thursday evening, a spokesperson for US President Joe Biden called for calm.

“We are concerned by the violence in Northern Ireland and we join the British, Irish and Northern Irish leaders in their calls for calm,” said press secretary Jen Psaki.

“We remain steadfast supporters of a secure and prosperous Northern Ireland in which all communities have a voice and enjoy the gains of the hard-won peace.

“We welcome the provisions in both the EU and UK trade and co-operation agreement and the Northern Ireland Protocol which helped protect the gains of the Belfast, Good Friday Agreement.”

“The way forward is through dialogue and working the institutions of the Good Friday Agreement,” Mr Martin said in a statement.