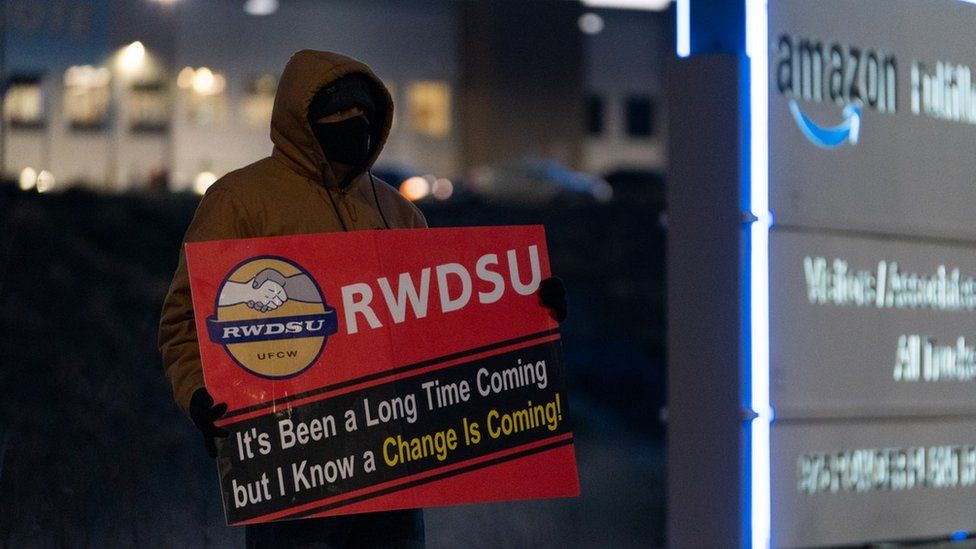 Amazon appears likely to be headed to victory over activists hoping to establish the company’s first unionised warehouse in the US.

Votes against the effort held a more than 2 to 1 lead, in an early tally of almost half the ballots on Thursday.

The National Labor Relations Board will continue the count on Friday.

The contest is seen as a key test for the e-commerce giant, which has faced global criticism for its treatment of workers during the pandemic.

Last month, US President Joe Biden called the vote by workers at the warehouse in Bessemer, Alabama a “vitally important choice”.

Celebrities and national Democratic politicians have travelled to the state to support the union campaign, which even drew some Republican backing.

A total of 3,125 ballots were cast in the election, according to the Retail Wholesale and Department Store Union (RWDSU), which was behind the unionisation effort.

That was a higher turnout than organisers had anticipated, representing just over half of the nearly 6,000 people employed at the warehouse.

Hundreds of the votes were challenged by Amazon and union representatives, but an incomplete count of uncontested ballots conducted by labour officials on Thursday showed that at least 1,100 workers voted against the union effort, compared to less than 500 votes in favour of unionising.

RWDSU leaders had hoped that a victory would set a new standard for the firm’s hundreds of thousands of workers across the country.

If successful, the union drive would mean Amazon, the second largest employer in the US, would have to negotiate a contract with union officials on issues such as work rules and pay.

But analysts had warned that the union faced an uphill battle in the election.

Union membership has steadily dwindled in America in recent decades – just 6% of private sector workers belonged to a trade union in 2020.

In Bessemer, a city with a population of 27,000 outside Birmingham, the opening of the Amazon plant last year was hailed as a welcome jobs creator, for a town hit hard by the closure of manufacturing plants in the 1980s.

Amazon had also fiercely opposed the unionisation drive. At mandatory staff meetings, in text messages and online, the e-commerce giant argued that it offered competitive pay and benefits.

It said the union would charge members hundreds of dollars in dues, without being able to make meaningful change.

In a statement on Thursday, RWDSU president Stuart Appelbaum said the union would call on the labour board “to hold Amazon accountable for its illegal and egregious behaviour during the campaign”.

“Our system is broken, Amazon took full advantage of that,” he said. “But make no mistake about it – this still represents an important moment for working people and their voices will be heard.”

In media interviews prior to the vote, pro-union workers had said the company frequently denied staff breaks, changed schedules unexpectedly and intrusively monitored their activities.

Union organisers had also tied the fight at the warehouse – where the majority of workers are black – to broader issues of civil rights and racial justice.