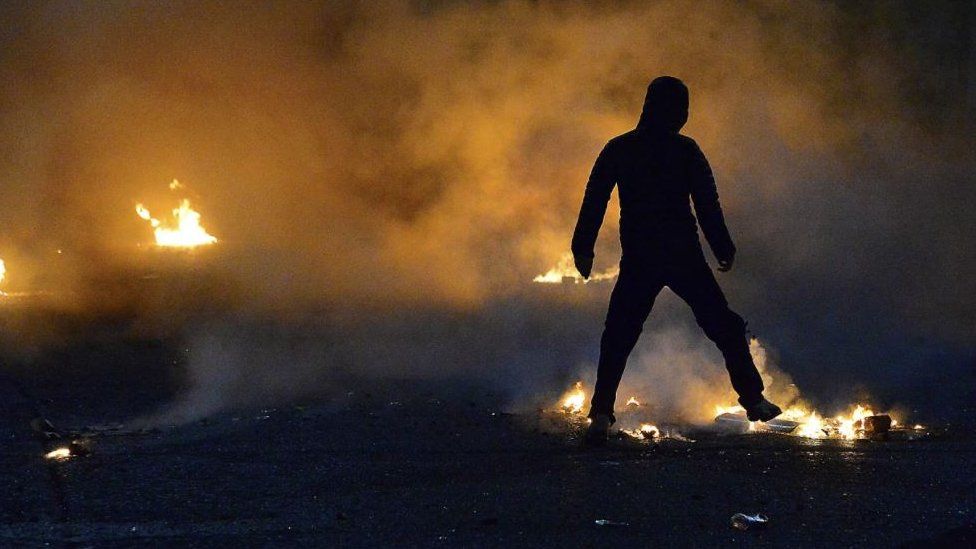 Prime Minister Boris Johnson has said he is “deeply concerned” about scenes of violence in Northern Ireland.

Police were attacked, petrol bombs thrown and a bus set on fire in another night of disorder in Belfast.

“The way to resolve differences is through dialogue, not violence or criminality,” he said.

The disturbances took place on both sides of an interface in the loyalist Shankill and nationalist Springfield Road areas of the city on Wednesday.

Forty-one police officers were injured in disturbances in parts of Northern Ireland over the Easter period, involving children as young as 13.

The BBC’s Ireland correspondent Emma Vardy said crowds of a few hundred on each side threw petrol bombs in both directions on Wednesday night.

The disruption took place close to where a number of loyalist protesters had earlier gathered.

Police confirmed a vehicle was set alight at the junction of Lanark Way and the Shankill Road in the west of the city.

Gates set alight at the peace line between between the Shankill Road and Lanark way interface in North Belfast. Crowds of a few hundred on each side throwing petrol bombs over in both directions. pic.twitter.com/LYnRmAETTY

Our correspondent said the arrival of a line of police cars interrupted the attacks over the peace wall.

Northern Ireland’s power-sharing Executive will meet on Thursday to be briefed about what Deputy First Minister Michelle O’Neill denounced as “the violence and street disorder which is causing huge distress in local communities”.

“Those involved in violence, criminal damage, manipulation of our young people and attacks on the police must stop,” said Sinn Féin’s vice-president.

Police also confirmed they had received a report of an assault on a press photographer.

The Police Federation for Northern Ireland said the violence could “set our society back years”.

Calling for the ongoing street disorder to stop, PSNI Chief Constable Simon Byrne said he was “open to dialogue with anyone who is willing to work with me to resolve the issues facing our community”.

Addressing the rioters, he tweeted: “Violence is not the answer.”

First Minister Arlene Foster condemned what she called “vandalism and attempted murder” and said it did “not represent unionism or loyalism”.

She said the actions “only serve to take the focus off the real law breakers in Sinn Féin”, and her thoughts were with the driver of the hijacked bus.

“Let’s focus on that and getting this stopped before someone loses their life.”

Taoiseach (Irish PM) Micheál Martin tweeted that he “utterly condemned” the unrest, adding: “Now is the time for the two governments and leaders on all sides to work together to defuse tensions and restore calm.”

Irish Foreign Minister Simon Coveney said the scenes were “very disturbing” and that “attacks on police, journalists and citizens must be condemned by all”.

“There are peaceful, democratic and legal channels to address all issues and concerns. Calm and positive leadership needed from all,” he said.

The attack on the press photographer, Kevin Scott from the Belfast Telegraph, took place on Cupar Way.

Mr Scott told BBC News NI: “I cover everything as fairly and impartially as possible, working at both sides of the community covering both the positive and the not so positive,” he said.

“I won’t be deterred from covering stories that are important and note-worthy.”

NI Infrastructure Minister Nichola Mallon said the hijacking and attack on a bus was “sickening”.

“Those responsible for this and ongoing attacks on the PSNI need to stop,” she tweeted.

A number of Belfast services, including the Glider buses, have been suspended.

The Easter disturbances have been blamed on loyalist frustrations over a Public Prosecution Service decision not to prosecute people who attended the large-scale funeral of republican Bobby Storey in June 2020, as well as concerns about the NI Protocol in the Brexit deal.

That event was attended by a number of senior Sinn Féin politicians, including the deputy first minister.