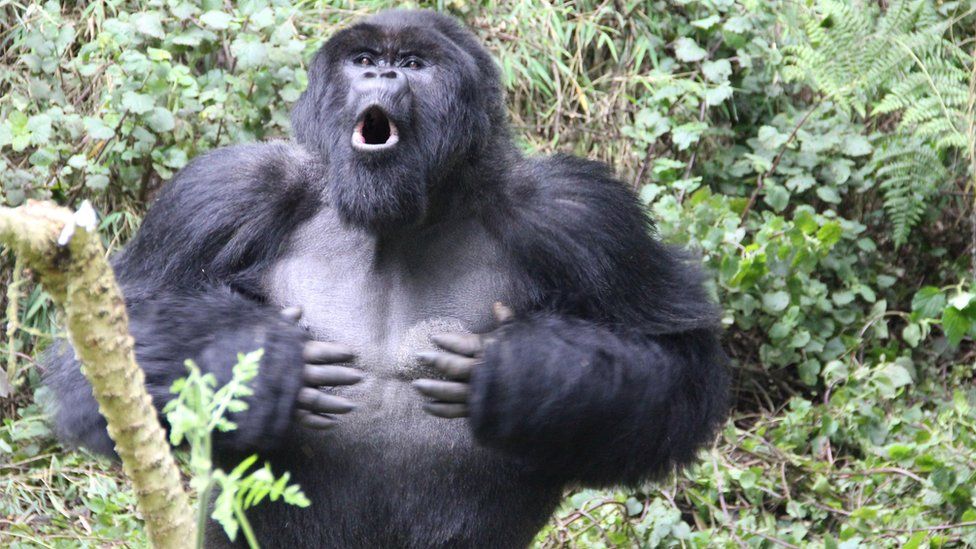 The bigger a male gorilla, the better he is at beating his chest to signal to friends and foe just how powerful he is, scientists have confirmed.

The impressive drumming sound is, as suspected, a measure of size and strength, a new study shows.

Females tune into the patter of hands on chest when sizing up a mate, while males are warned off picking a fight.

Researchers say it’s a powerful means of communication in the dense tropical forest where gorillas live.

The chest beating, performed by adult males, known as silverbacks for their saddle of greying hair, can be heard over one kilometre away.

“For a long time now we’ve assumed it’s some kind of showing off of how powerful they are, and they do this towards males and females,” says Edward Wright of the Max Planck Institute for Evolutionary Anthropology in Leipzig, Germany.

“For the first time we can really be certain that, yes, body size is conveyed in these chest beats and the chest beat is an honest signal of body size.”

In gorilla society, groups are normally made up of one male and a number of females. Females may move between groups, with males competing for their attentions.

As far as male gorillas are concerned, size matters; body size predicts rank, fighting ability and reproductive success. Silverbacks use chest beats to warn off male competitors and woo females in a show of size and strength.

Male gorillas learn chest beating from an early age, practising the skill as they grow up.

These are an honest signal of body size – in other words, male gorillas can’t fake it.

It’s thought the sounds are related to the size of air sacs near the voice box found in gorillas and some other great apes (but not humans), which play a role in the grunts, growls and calls gorillas make as well as non-vocal chest beating.

What’s more, differences were seen in the duration and number of chest beats made by different gorillas, suggesting individuals can be identified from their chest beat alone.

The researchers came up with their conclusions by measuring the body size of male gorillas from photographs, based on the distance between the gorillas’ shoulder blades – the breadth of their back.

Using sound recordings, they measured the duration, number and audio frequencies of chest beats made in the wild by silverback mountain gorillas monitored by the Dian Fossey Gorilla Fund in the Volcanoes National Park, Rwanda.

There were around 600 mountain gorillas left in the wild in 2008; but numbers have now risen to over 1,000 after intensive conservation efforts. These include anti-poaching patrols and vets trained to give care to gorillas in the wild.

The gorilla is restricted to protected areas in the Democratic Republic of the Congo, Rwanda and Uganda. Threats remain, including poaching, civil unrest and diseases passed on by humans.

But while mountain gorillas are increasing in number, the great ape remains endangered.