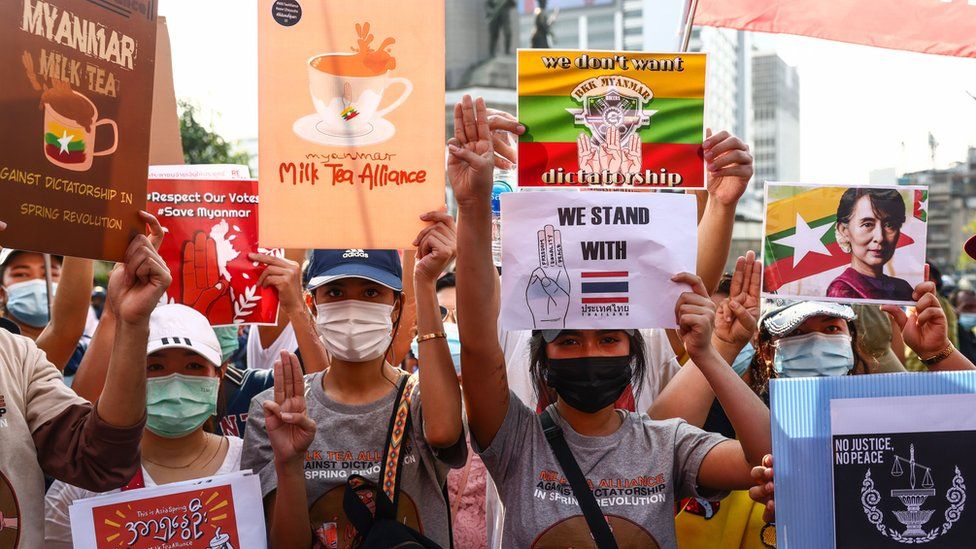 The alliance has brought together anti-Beijing protesters in Hong Kong and Taiwan with pro-democracy campaigners in Thailand and Myanmar.

The emoji, a white cup set against three different shades of a popular regional tea, marks a year since the #MilkTeaAlliance hashtag started.

One target is Chinese dominance, and Beijing says it is “full of biases”.

What is the Milk Tea Alliance?

The alliance has united campaigners pushing for greater democracy.

It emerged last year from a Twitter dispute between Chinese nationalists and a young Thai actor and his girlfriend, who were accused of supporting democracy in Hong Kong and Taiwanese independence.

Use of the hashtag spiked again this February after a military coup in Myanmar led to mass protests.

“We have seen more than 11 million tweets featuring the #MilkTeaAlliance hashtag over the past year,” Twitter said in a post on the platform.

The emoji will automatically show up when users post the #MilkTeaAlliance hashtag.

Twitter said: “During times of civil unrest or violent crackdowns, it is more important than ever for the public to have access to the #OpenInternet for real-time updates, credible information, and essential services.”

The announcement is a big moment for the movement, Netiwit Chotiphatphaisal, a leading Thai activist, told the BBC.

“It’s very good that Twitter has recognised what we have fought for for many years,” he said. “We have to fight not only our dictators but also with Chinese dominance.”

“The movement is happening not only online but offline. It’s made a big impact.”

Prominent activists from the region have celebrated the announcement online.

Previously, Twitter has created emojis for the #MeToo and #BlackLivesMatter movements.

What does China say?

The Chinese government has criticised the Milk Tea Alliance.