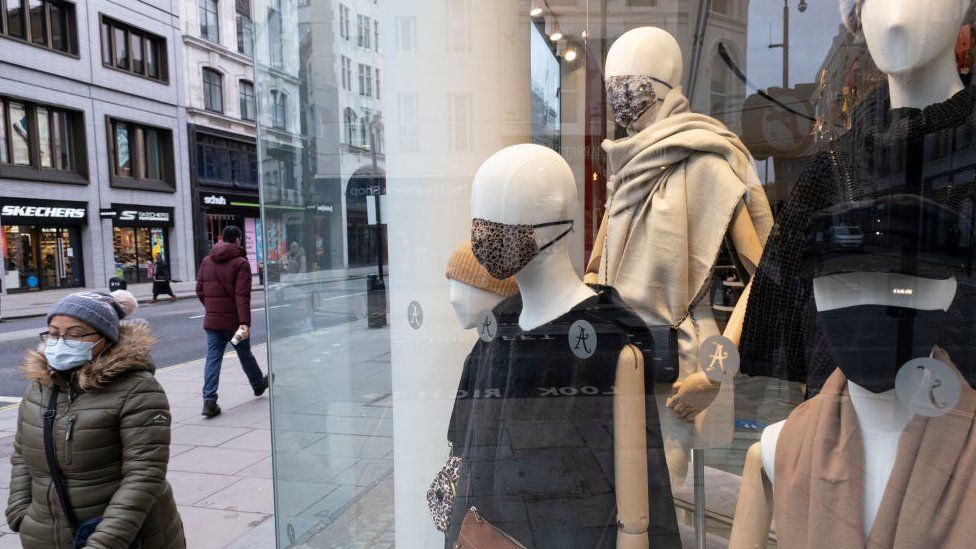 The analyst predicts a 48% rise in sales when lockdown restrictions are lifted on 12 April.

While footfall was still lower in March, the annual decline had halved in retail parks by the end of the month.

Springboard said it indicated there was “pent up demand”.

Between the first and last weeks of March, shopping centres saw the decline in footfall move up from -69% to -62.5%, compared with the same period in 2019.

Meanwhile, a -29.8% annual drop in footfall at retail parks shrank to -14.8% just before the Easter weekend.

And during the four-day bank holiday, footfall in central London and other large British cities was three times greater than for the same period in March 2020, which was just after the first coronavirus lockdown began.

Springboard says that the fact more consumers are visiting these locations to buy from those essential shops allowed to stay open indicates a “pent up demand” to make shopping decisions in person in bricks and mortar stores, rather than online.

“Footfall in UK retail destinations has increased from week to week for 10 of the past 11 weeks despite all but non-essential stores being closed,” said Diane Wehrle, insights director at Springboard.

“This is the longest period of sustained increases in footfall since the lead up to the reopening of non-essential retail stores in June 2020 when footfall rose for a consecutive six weeks.”

Meanwhile, latest data from consultants PwC’s Consumer Sentiment Index shows that consumer confidence is now at its highest level since the tracking of the data began in 2008.

PwC says the figures show there are consumers with more disposable income and “a pent up demand to spend after a year of lockdown restrictions”.

It says a big reason for the optimism stems from the coronavirus vaccination rollout and the fact that people over 65 and many of those over 55 have already received their first jabs.

The consultants added that it saw a “never before seen” jump in leisure-spending intentions, rising from -7% to -16% in February, to a positive 25-32% in April.

“Forced savings during lockdown have led to record levels of optimism and a number of ‘firsts’ such as all regions being positive since we started the survey in 2008,” said PwC’s consumer markets lead Lisa Hooker.

“Consumers have missed their favourite activities such as shopping, eating out and going on holiday and so there is ample opportunity, over the spring and into the summer, for operators to maximise this appetite to spend.”