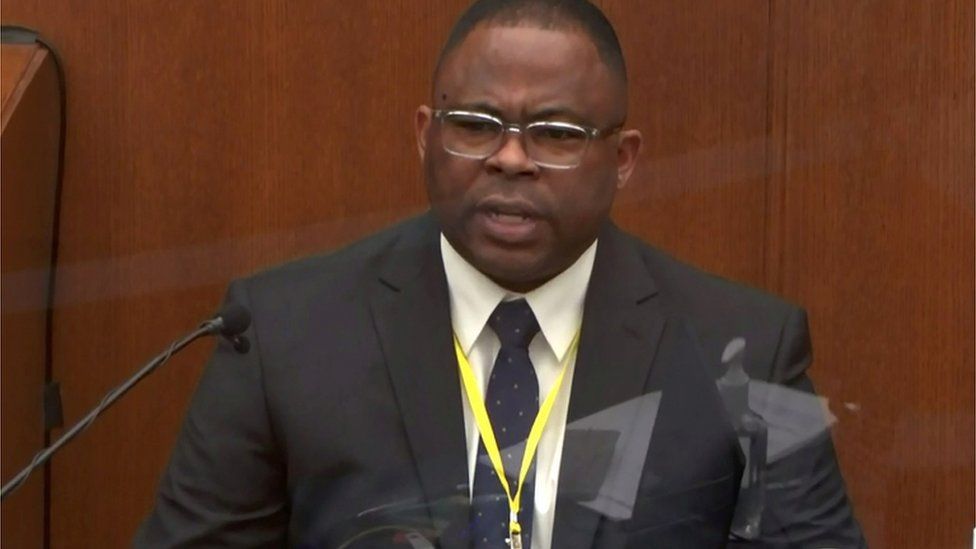 An expert witness has testified that “excessive” force was used by ex-officer Derek Chauvin during the arrest of unarmed black man George Floyd.

Sgt Jody Stiger, a use of force expert for the Los Angeles Police Department, said that “deadly force” was used after Mr Floyd was placed in handcuffs.

Mr Chauvin, 45, was filmed kneeling on Mr Floyd for over nine minutes during Mr Floyd’s arrest last May.

He is on trial for murder and has denied the charges against him.

The footage of Mr Chauvin, who is white, with his knee on Mr Floyd’s neck sparked global protests against racism.

With the trial in its second week, jurors have now heard from more than 20 prosecution witnesses, including four police training experts on Tuesday. The trial is expected to last for at least one month, with the defence scheduled to argue its case starting next week.

On Wednesday, as prosecutors continued to argue that Mr Chauvin had used undue force, the defence team sought to draw attention to Mr Floyd’s alleged drug use, claiming he could be heard saying “I ate a lot of drugs” in bodycam video.

What did the expert say?

Sgt Stiger, who reviews use of force investigations for the Los Angeles Police Department (LAPD) testified for the prosecution over two days.

On Tuesday, he was one of four police officers who condemned Mr Chauvin’s handling of the arrest, which was sparked by Mr Floyd’s alleged use of a counterfeit $20 bill.

On Wednesday, he argued that “deadly force” was used by the officers who pinned Mr Floyd to the ground.

He added that “no force” was necessary after Mr Floyd had been placed in handcuffs and that continuing to press down on Mr Floyd could have caused “positional asphyxia, which could cause death”.

Being handcuffed with hands behind the back makes it difficult for a suspect to breath, he said.

“When you add body weight to that, it just increases the possibility of death,” he continued.

He said that officers are trained to be able to make arrests while being confronted by a hostile crowd, and that in his view, he did not perceive the onlookers “as being a threat”.

He was also asked about “pain compliance,” meaning moments when officers can lessen the amount of pain inflicted on a suspect in exchange for compliance.

“What if there’s no opportunity for compliance?” asked prosecutor Steve Schleicher, arguing that Mr Chauvin appeared to bend one of Mr Floyd’s handcuffed hands in an effort to cause him pain and make him obey officer’s orders.

What did the defence argue?

Mr Stiger acknowledged defence attorney Eric Nelson’s point that an officer’s actions must be viewed from the point of view of an officer at the scene, not in hindsight.

Mr Stiger agreed with Mr Nelson that all use of force policies have qualifiers – that is, the context of the situation, security, and experience must be taken into account when examining potential violations.

He also concurred that it would have been reasonable for Mr Chauvin to arrive on scene with a heightened sense of awareness as dispatchers had described Mr Floyd as over six feet tall (2m) and possibly under the influence.

When Mr Nelson pointed to still images taken from officer’s body cameras to argue that Mr Chauvin’s knee was on Mr Floyd’s shoulder blade, Mr Stiger disagreed, saying that pressure was still being applied to the neck area. Mr Stiger also testified that Mr Chauvin did not appear to move his knee from Mr Floyd’s neck for the entire period he was on top of him.

The defence team also claimed that Mr Floyd could be heard saying “I ate too many drugs” in bodycam footage of the incident.

Mr Stiger testified that he could not hear the phrase in the clip, though another witness, Special Agent James Reyerson of the state Bureau of Criminal Apprehension, initially agreed it appeared to sound that way.

He later retracted that statement, saying he believed Mr Floyd had in fact said “I ain’t do no drugs”.

A dramatic reversal in court

In a dramatic reversal, the chief investigator in the case of Derek Chauvin has retracted his view that George Floyd told police officers at the scene that he had “ate too many drugs.”

Defence counsel earlier extracted the acknowledgment from James Reyerson from the Bureau of Criminal Apprehension after he was played police body cam footage twice. He accepted after the second occasion he was shown the video that Mr Floyd said those words as he was being restrained on the ground.

It’s a central part of the defence case that George Floyd died as a result of fentanyl and methamphetamine found in his body and not the more than nine minutes Derek Chauvin knelt on him.

It also emerged in cross-examination that it was defence lawyers who spotted the existence of a pill in the back of one of the vehicles from the scene – more than six months after the event itself.

The prosecution has taken evidence from a string of current and former police officers who have told the court that the force used on Mr Floyd was excessive.