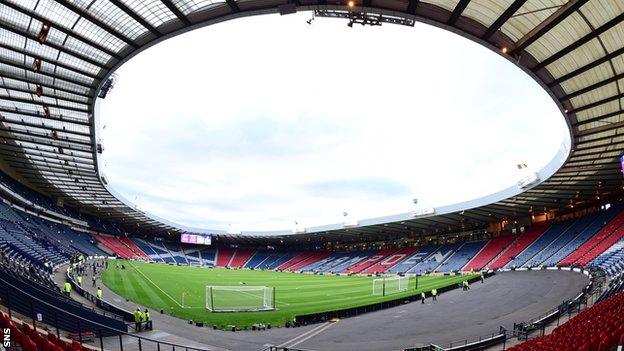 The Scottish government has given approval for 12,000 supporters – 25% of the stadium’s capacity – to attend Euro 2020 matches at Hampden in June.

Uefa had given the 12 host cities until Wednesday to submit plans for fan attendance, with the likelihood of some venues being switched if no guarantees could be given.

A final decision from the governing body is likely to come on Friday.

Scotland are set to start against the Czech Republic at Hampden on 14 June.

The national stadium is also scheduled to host Croatia’s Group D meeting with the Czechs four days later, followed by Croatia v Scotland on 22 June, and a last-16 game on 29 June.

The championship – Scotland’s first appearance at a major finals since 1998 – was supposed to be held last year before being delayed because of coronavirus.

Uefa is keen to have as many fans inside venues as possible and could reject cities that cannot provide guarantees on supporter attendance.

It’s understood Glasgow’s plans will work on the basis that fans will be allowed inside with strict adherence to the two-metre social distancing rules.

A decision on whether there will be a Fan Zone in the city will be made at the end of April and Uefa will be in contact with ticket holders for the matches on Friday.

Under current plans, large scale events could resume in Scotland from 17 May, but the Euro 2020 matches at Hampden in June are the first confirmation of fans returning to stadia in Scotland.

Fears continue for other host cities as a third wave of the pandemic threatens mainland Europe – with Germany and France in particular seeing dramatic rises in case numbers.

Dublin – which is set to host three group games – has told Uefa that it is currently unable to provide assurances on minimum spectator levels.

However, the Italian Football Federation say Rome’s Stadio Olimpico will welcome spectators, and the Dutch authorities have announced plans to enable 12,000 fans to attend matches at Amsterdam’s Johan Cruijff Arena.

I’ve spoken to a few fans who are really excited by this news. One Tartan Army member said it is genuinely the first piece of excitement he’s had in the past year.

There’s also hope that by the time the games come around, the attendance number could be revised up the way. It can’t be revised down as far as Uefa are concerned.

We’re almost there and we should know by Friday if we’re over the line. The fear now is 12,000 looks great on the surface, but exactly how many of those tickets will find their way to the Tartan Army? That will have to be explained by Uefa.