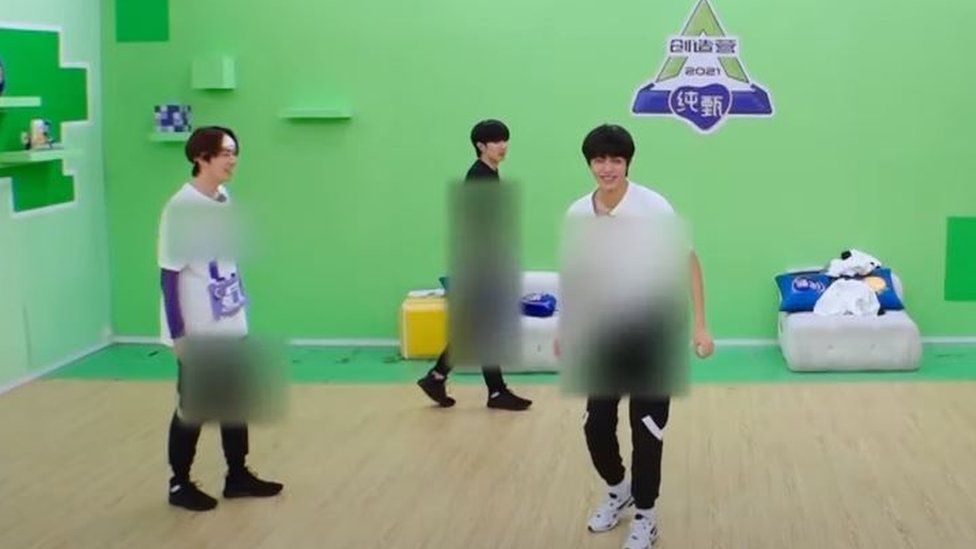 Chinese TV stations have been blurring out Western brand logos in their programmes, in a show of support for China’s Xinjiang cotton campaign.

The move has delayed some broadcasts, as post-production editors censor everything from T-shirts to shoes.

Western retailers are facing a backlash in China after they expressed concern over the alleged use of minority Uyghur forced labour in cotton production.

Beijing denies this and, in recent days, many brands have faced boycotts.

There has been massive online outrage, and celebrities have been publicly severing ties with western brands and expressing support for Xinjiang cotton.

And now popular TV shows are also rushing to show their support. But this has resulted in much unintentional hilarity.

Episodes of popular variety shows such as Sisters Who Make Waves now have singers and actors look like they are floating on clouds, thanks to their blurred out shoes.

The blurring treatment was taken up a notch further on reality show Chuang 2021, as contestants had worn clothes branded with Western logos from head to toe.

But one of the more challenging programmes to censor was probably the reality TV contest Youth With You, given the sheer number of contestants.

The production company behind the show, iQiyi, had issued a notice on March 25 saying that an upcoming episode had to be delayed, although it did not give a reason.

Two days later, however, viewers immediately spotted that brand logos had been blurred on the t-shirts of more than 50 people.

What is the background to all this?

The cotton row erupted after the US and other western governments ramped up pressure on China over alleged human rights abuses in the north-west region of Xinjiang.

The Xinjiang cotton campaign began last month when Chinese state media outlets and netizens singled out H&M over a statement made last year, and soon expanded to include many other brands.

Some companies’ online shops are blocked and their stores have vanished from some digital maps.

Some of the other brands that have been embroiled in the controversy include Nike, Adidas and Puma – all members of the Better Cotton Initiative (BCI), a non-profit group promoting sustainable cotton production.

The group said in October it had suspended activities in Xinjiang as well as licensing of the region’s cotton, citing allegations and “increasing risks” of forced labour.

In December the BBC published an investigation based on new research showing China was forcing hundreds of thousands of minorities including Uyghurs into manual labour in Xinjiang’s cotton fields.

Apart from all the jokes on social media, many users have also confessed that they “felt sorry” for the post production workers, with one user on microblogging platform Weibo commenting: “They worked really hard. I don’t think they can get any sleep these days.”

Others created spoof versions of their own.

This is just the latest example of heavy-handed blurring of TV programmes in China.

Hip-hop culture, tattoos and cleavage have all been censored in the past.

In 2019, the decision by a popular Chinese video streaming platform to censor the ears of actors wearing earrings sparked heated debate online.

Many took to social media at the time to argue that the censorship was driven by a desire to protect “traditional” gender roles.

In 2015, popular Chinese TV drama The Empress of China was re-edited to get rid of the plunging necklines featured in the show – provoking a large amount of public outrage.