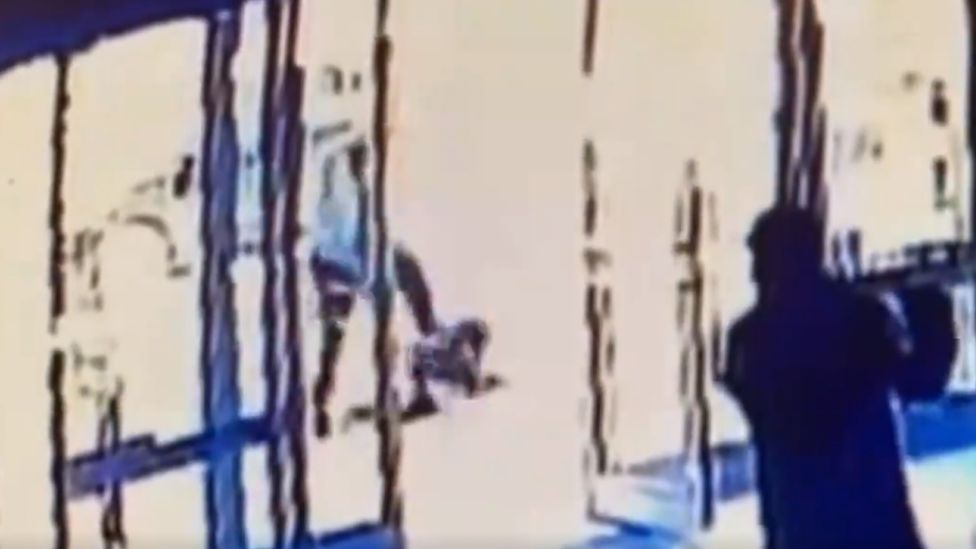 Two doormen have been fired after they allegedly failed to intervene as an Asian-American woman was being attacked in New York.

The 65-year-old woman was admitted to hospital after she was punched and kicked repeatedly last month.

CCTV video from the attack appeared to show staff at the Manhattan building watching without intervening.

The Brodsky Organization, owners of the building, said the men assisted the woman after the attacker left.

The incident comes amid a rise in anti-Asian crimes in the wake of the pandemic, including a deadly attack in Atlanta in which three women of Asian descent were among the eight dead.

Footage shared by police appears to show a man approaching a woman in the street and kicking her to the ground. While she is lying on the floor outside a building entrance, he kicks her again in the stomach and the face.

Staff at the building appear to watch the attack and a doorman is seen closing the door. The doormen were suspended after the attack, pending an investigation.

A statement from the building’s owners to CNN said that after the suspect fled the scene, the doormen assisted the woman and flagged down a police vehicle. However, it added that “required emergency and safety protocols were not followed”.

“We are extremely distraught and shocked by this incident, and our hearts go out to the victim,” they added.

The union that represents the staff members told the New York Times in a statement that the employees did assist the woman.

In a longer video obtained by the New York Times, a delivery person appeared to be the sole witness when the attack happened and the doormen come out later, move towards the door and then close it. A minute later they are seen walking outside.

Kyle Bragg, president of the 32BJ SEIU union, said that the employees had started a process to challenge their dismissal.

More than 3,795 incidents were reported to the organization Stop Asian Americans and Pacific Islanders (AAPI) Hate from 19 March last year to 28 February this year, according to a report.

This probably accounts for just a fraction of attacks, the organisation explained.

Nationwide statistics recording hate crimes in 2020 have not yet been released, but many Asian-American people say they have observed a rise in insults and attacks.

He said the government would publish interactive data on hate crimes as well as train national and local police in responding to hate crimes.