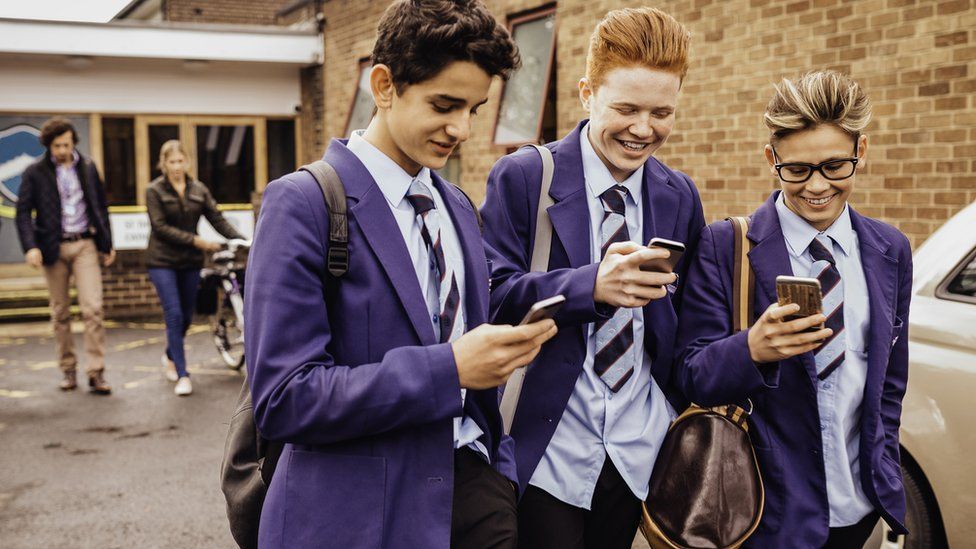 Mobile phones should be banned from schools because lockdown has affected children’s “discipline and order,” the education secretary has warned.

Gavin Williamson told The Telegraph phones should not be “used or seen during the school day”, though he said schools should make their own policies.

Phones can act as a “breeding ground” for cyber-bullying and social media can damage mental health, he added.

“It’s now time to put the screens away, especially mobile phones,” he wrote.

“Technology has been invaluable in keeping children learning during lockdowns and we support its use,” he said.

“Outside the classroom, the use of mobile phones distracts from healthy exercise and good old-fashioned play.

“Worse, it acts as a breeding ground for cyber-bullying, and the inappropriate use of social media sites.

“While it is for every school to make its own policy, I firmly believe that mobile phones should not be used or seen during the school day, and will be backing head teachers who implement such policies.”

The government will be consulting on how to help heads remove phones from schools, later this year, he added.

The vast majority of schools already have policies limiting the use of phones in lessons, according to data from Teacher Tapp, an app that conducts daily surveys of about 8,500 teachers.

According to the app, about half of secondary schools and most primary schools do not allow phones to be used at break or lunchtime either.

“The real issue flagged by secondary teachers is that rules and sanctions are inconsistently applied, and it isn’t always clear whose responsibility it is to remove a phone, or if they are allowed to do so,” Laura McInerney, co-founder of Teacher Tapp, said.

“How the education secretary will change that problem isn’t immediately clear.”

Schools have the power to ban phones from being taken on to the premises.

But government policy is that it is the responsibility of head teachers to determine whether this is appropriate.

But no laws have been made to enforce it in the UK.

In France, the law prevents children from using their phones inside school grounds.

And, earlier this year, China’s Ministry of Education announced that pupils would not be allowed to bring mobiles to school without written parental consent.

Mica-May Smith, from Bright Futures Education, an education training company, said a blanket ban was a bad idea “as children may still bring them into school and hide them”.

Instead, there should be a “collaborative approach with rules in place” including designated times and areas for use, she said.

“It is about bringing trust and preparing them for the adult world,” she added.

Phones should be incorporated into lessons as a “fundamental part of the curriculum”, said Susan Wessels, deputy head of Framlingham College in Suffolk.

“Schools are designed to prepare students for the real world,” she added. “We must encourage pupils to use their phones constructively.”

“Children spent more time than usual on their phones during the pandemic,” she added.

“This was the main way to stay connected to peers which has more or less turned into an addiction now.”

Mr Williamson also wrote about the need for discipline and structure as children return to schools.

“Although remote learning was a tremendous success in terms of enabling children to carry on with their lessons from home, the lack of regular structure and discipline will inevitably have had an effect on their behaviour,” he said.