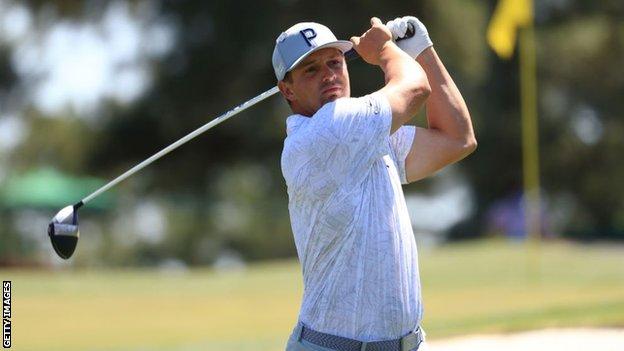 Bryson DeChambeau has a “secret” club for this week’s Masters as he continues to “go down numerous rabbit holes” in his quest to win a Green Jacket.

He claimed his length off the tee made him view Augusta as a par 67, rather than 72, but he finished in a tie for 34th, 18 shots behind Dustin Johnson.

“There’s something in the bag this week that’s very helpful,” said DeChambeau.

“I won’t go into specifics but just know this has been a few years in the making and I’m very excited for it.

“Whether it helps me perform at a higher level, I’m not sure, because it’s golf and you never know what happens.

The 27-year-old has also been working out new places to hit his tee shots to give him the best angle of approach into the notoriously quick greens.

“I’m trying to see how far right I can go, over the trees, on the first,” said the world number five. “That is the line I want to take.

“Number 11, I can squeeze it down the right side pretty far. Number nine, I can take it over the left trees and get into that big expanse of grass, which is cool.

“On five, I hit it over the bunkers into the wind. On three, try and drive the green this year. It’s a little firmer this year.

“This is a place where I do put an expectation value that I think I have a good chance to play well.”

DeChambeau’s best finish in four appearances remains his tie for 21st as an amateur in 2016 but he has made winning the Masters his top priority.

“This has been on my radar since I was a kid and now I have accomplished winning the US Open, this is the next goal for me,” he said.

“It comes down to execution. You have got to be able to hit a great shot and execute when the pressure comes around.

“I can give myself the most advantages all day long, but if I don’t go out and just execute it doesn’t really mean much.”

Justin Thomas heads to Augusta National on the back of a win at the Players Championship last month and looking to improve on his best Masters finish of fourth in November.

The 2017 US PGA Championship winner says he will miss the presence of Tiger Woods this week and has been regularly visiting the five-time Masters champion.

Woods is at home recovering from the career-threatening leg injuries he suffered in a car crash in February.

“We texted Friday morning and he said it’s kind of starting to set in. He’s bummed he’s not here playing practice rounds with us and we hate it, too.”

The 27-year-old has also offered to help his fellow American in any way he can.

“That’s just what I want to do for him, is just be like, ‘dude, I’ll do anything you want’,” Thomas added.

“If you need me to help out with your kids, I can do that. If you’re craving McDonald’s and you want me to bring it over, dude, I don’t care.

“I’m here for you and I’ll help out however I can.”