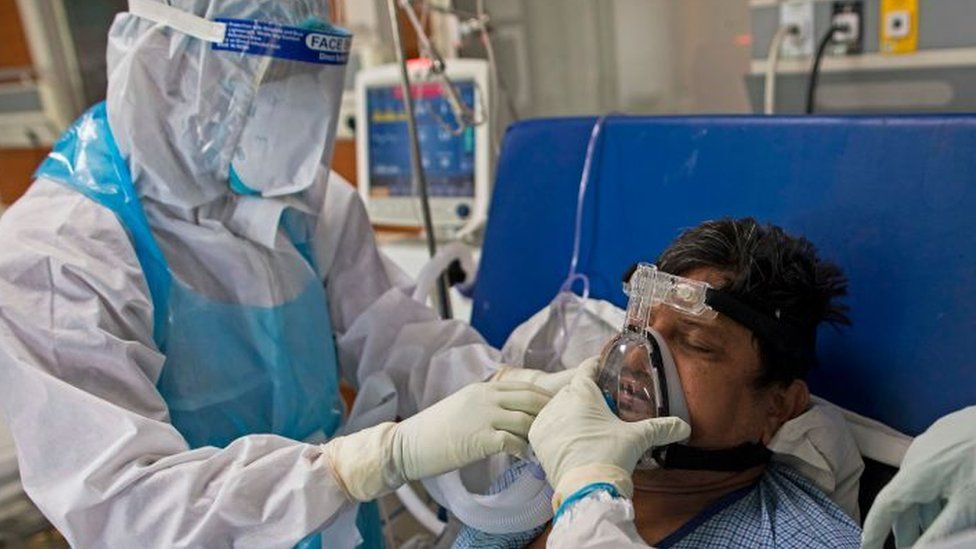 It was the middle of January when Dr Lancelot Pinto realised he would be able to spend some quality time with his family after nearly a year.

The pulmonologist had spent most of 2020 battling successive surges in Covid-19 cases at his hospital in Mumbai city. But by January this year daily infections across India had fallen to less than 20,000 from a peak of over 90,000 in September, and he could “see some light at the end of the tunnel”.

The situation took a turn for the worse in March as cases started to rise sharply. On 4 April, India breached the 100,000 daily caseload mark for the first time since the pandemic began. More than half of those cases were confirmed in Maharashtra, which has India’s largest city, Mumbai, as its capital.

Now Dr Pinto’s phone is ringing every few minutes, mostly from desperate families looking to find a bed for Covid patients. “We are already overrun. All Covid-19 beds in my hospitals are full,” he says.

He tries to stay calm as “it’s not people’s fault”, he says.

“When a sick member of the family needs a bed, you would call anybody who might be able to help.”

Back in the hospital, he says the team is more physically prepared for the second wave. Most of them have been vaccinated and treatment protocols have also been refined.

But, he adds, “nobody is mentally prepared”.

“We are doing everything we can, but we don’t have the same mental strength we had last year.”

The scenes in hospitals in India’s capital, Delhi, and its neighbouring areas are not too different. Dr Reshma Tewari Basu, the head of critical care at Artemis hospital in Gurugram (a suburb of Delhi), says hospital admissions are increasing every day.

Delhi has been averaging more than 3,500 daily cases in the past few days. “What’s happening in Mumbai will eventually happen in Delhi too,” Dr Basu says.

Dr Basu says the surge isn’t unexpected, but she’s found it frustrating to see people forget the pandemic isn’t over.

“Healthcare workers are now bearing the brunt of the spike in cases,” she says.

Outside hospitals, life still seems normal in cities like Delhi. Restaurants and night clubs are full, markets are open and crowded – few people are following safety protocols such as social distancing and keeping their masks on.

This makes Dr Yatin Mehta, the chairman of the critical care department at Medanta Hospital, angry. He says India wasted the window of opportunity it had in January and February.

“We should have used the lean period to strengthen safety protocols, increase testing and tracing, and ramp up vaccination,” he says. But that didn’t happen, and now we are staring at what experts have called a deadlier second wave.

Before February, Dr Mehta was also able to spend more time with his family. He treasured seeing his wife, two sons, daughters-in-law and grandchildren. But now his phone too rings constantly – he had to answer several calls during our interview.

He says people have to remember that healthcare workers are “exhausted and stretched to their limits”.

“I am not sure how long we can continue like this. We will do everything we can, but the second wave is going to test our endurance at extreme levels,” he says.

And it’s not just about physical exhaustion. Dr Mehta also worries about the mental health of his colleagues across the country. “Whatever job you do, just imagine doing it for 24 hours, seven days a week and under 100 times more pressure than what you are used to – that’s exactly what every doctor, nurse and healthcare worker has to go through during any peak,” he says.

Others doctors agree that the mental health of healthcare professionals should worry policymakers. Fatigue, trauma and mental health are issues that doctors don’t have the luxury of discussing at the moment, Dr Basu says.

“We have to just dive straight in and take the pandemic head on. But that doesn’t mean we don’t have problems.”

Many medics say the current peak is more draining because “there seems to be no end in sight”. Dr Pinto says there was fear in the early months of the pandemic, but it eventually disappeared as the focus turned to bringing the numbers down.

There was another spike in November, but several vaccines were just around the corner and healthcare workers felt the finish line could be close. Now the current peak has dimmed those hopes.

“It’s like fighting a battle without knowing when it will end,” Dr Pinto says. Vaccination has raised hopes as more than 80 million doses have been given so far, mostly to frontline workers and people above the age of 60. Jabs are now available to anybody above the age of 45, but experts say the pace must pick up to halt the spread.

And it’s not just doctors – nurses and ward boys also feel they are exhausted and overworked.

They have to work long hours wearing PPE and often end up managing several critical patients at the same time. Vidya Vijayan, a nurse at the Ernakulum Medical College in Kerala state, says “people have brought it upon themselves”.

She says people in the state became lax in the last few weeks. Kerala is one of the five states where elections are taking place. Big rallies are being held in these states but neither politicians nor the public have adhered to safety protocols.

The state is known to have good healthcare infrastructure, but she feels there is a real risk of the system being overrun.

“We have been working constantly under pressure in the past year. There was a brief lull in January but that seems to have gone,” she says.

“And now it feels like we have to go to war again, but with depleted strength. But we won’t give up, I just want people to think about us who work inside ICUs before they go out partying.”