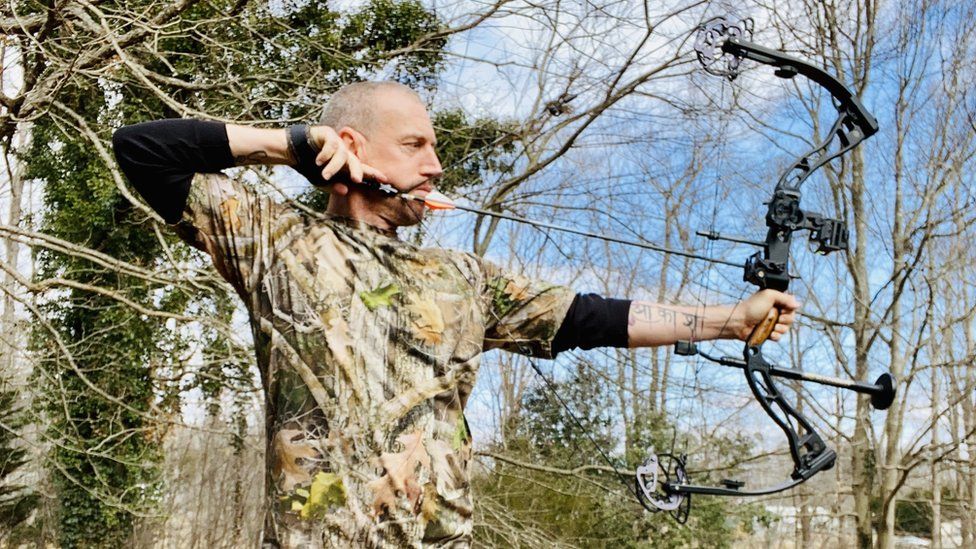 After decades of decline, a growing number of Americans are now learning hunting skills, as writer Richard Baimbridge reports.

It’s past midnight deep in a Florida wetland, and I’m riding in a ridiculously beefed-up Jeep with a loaded rifle and a $12,000 (£8,700) thermal night-vision scope in my lap.

The muddy water is so deep that it occasionally spills over into the windowless vehicle, as I scan around my seat nervously for alligators. Simultaneously, I’m trying to follow a conversation between two scraggly men speaking a dialect of English that I can barely understand.

The story of how someone like me, who only a year ago would’ve been far more likely to be in a yoga class in Brooklyn, is hunting for wild hogs with a bunch of self-identifying hillbillies is a complicated one. Yet strangely enough, I’m far from alone.

Like some five million other Americans last year, I bought a firearm for the first time. I walked into a gun store, which was also an entirely new thing for me to do, and purchased a bolt-action Winchester 30.06 hunting rifle.

The decision was driven as much by fears over social unrest as concern that the food supply chain might break down due to the pandemic.

While I would in no way call myself a “prepper” or doomsday cultist, the sight of violent clashes on the streets last summer, and empty shelves at grocery stores, was enough to inspire me to buy a gun for safety, and learn how to use it to procure food in the wild.

After panic buying caused severe ammunition shortages across the country, I then went a step further, learning to track and hunt game with a bow and arrow, and process meat in the field.

Over the past few months, I’ve been set upon by a snarling coyote that only stopped once I pointed a gun at its face from 10ft (three metres) away, and forged an unlikely friendship with a hunting and survival mentor from Pennsylvania. He’s been shot in the back by poachers, and attacked by bears.

Not long ago, if someone told me they were learning to survive in the woods with a bow and arrow in case of social collapse in the US, I would’ve thought they were unhinged. But further statistics suggest an increasing number of people are taking those concerns seriously.

Last year, the state of Michigan reported the biggest increase in new applications for hunting licences that it had seen for two decades. Many of those people came from outside traditional hunting demographics – a shift that’s been reflected throughout the US.

Dave Marks is one of them. A doctor in the uber-liberal college town of Chapel Hill, North Carolina, he walked into a gun store at the start of the pandemic and bought one of the last shotguns on the shelf.

Within a few months, he was hunting – something that didn’t sit very well with his wife, an “anti-gun, anti-hunting vegan”, or their vegetarian children. “I was raised by New York Jews,” says Mr Marks. “No one hunted in my family. No one had guns. Hunting always seemed ethically questionable to me, something that mostly rednecks do.”

Despite his wife’s dismay, he taught himself to hunt with guns and crossbows, learned how to field dress deer, and even purchased hunting land. While he says the possibility of the food supply chain breaking down was part of the consideration, he’s more interested in ethical meat harvesting and wildlife conservation.

A self-described “moderate liberal,” he also found himself making peace with the conservatism of rural America at a time when those two sides of the US were seemingly not on speaking terms with one another. “It makes you appreciate the commonalities, the things that you can relate to with people from different backgrounds and political views,” he says.

The hope within the hunting community is that the new enthusiasts like Mr Marks will help reinvigorate a pastime that had been in sharp decline.

Reasons for the fall range from the increased popularity of vegetarian or vegan diets, to public shaming of hunters, and fewer young people taking up the hobby.

These declines in hunting numbers were welcome news to some animal rights advocates, and we have to respect their viewpoint.

People for the Ethical Treatment of Animals (Peta), the world’s largest animal rights organization, says that hunting is an “unnecessary, violent form of ‘entertainment’ [that] rips animal families apart”. Anyone interested in finding out more about its position could check out Peta’s website.

However, state wildlife agencies get about 60% of their budget from the sale of hunting licenses, and taxes on guns and ammunition.

They also rely heavily on hunters to control animal populations that have made extraordinary comebacks since managed wildlife programs began in the early 20th century. In 1930, for example, there were only 300,000 white tail deer left in the US. Today, there are more than 30 million.

There are also increasing efforts to make the US hunting community less white, and less male. Website Outdoor Life estimated in 2019 that 90% of American hunters were Caucasian and 70% were men.

Opportunity Outdoors is a volunteer organization based in North Carolina whose mission is to bring new people into hunting by making it more inclusive and accessible.

Founded in 2019 by young hunters Andy Tomaszewski and Evan Trebilcock, their intention was to create a scalable mentorship program that could be rolled out nationally over the next few years. The group promotes ethical hunting combined with conservation and outdoor survival skills such as wild foraging.

Their outreach coordinator, 23-year-old Safiyyah Motaib, grew up in Queens, New York. She’s also a practicing Muslim of Moroccan descent who performs her daily prayers while out in the field. And she hunts according to Islam’s Halal slaughter rules, whispering prayers before firing upon an animal.

“As a kid growing up in New York, I fantasized about the outdoors,” says Ms Motaib, who is a research biochemist. “I’ve always wanted to buy a hunting rifle. Covid pushed me to do that sooner, and it gave me the time to go out and start hunting.

“As far as the food supply system breaking down, I definitely think it’s possible in a bigger crisis. So I think it’s good to know how to hunt, and get your own food and preserve it properly.”

Meanwhile, far across the country in the remote desert canyons of Utah, Boulder Outdoor Survival School master instructor Jeremy Thomas reports that enrolment is up five-fold since 2019.

The program was created back in 1968, and is considered one of the toughest hunting and survival camps in the world. Students from across the US and around the world hike out into the desert for up to 28 days, carrying next to nothing, making their own fires, catching their own food, and drinking rainwater.

Mr Thomas believes the surge in interest since Covid-19 is two-fold. “Part of it is people wanting to get outdoors after being stuck inside,” he says.

“And part of it is a reaction to the instability happening in the world today. We all have ancient skills as humans that have atrophied over time because we don’t use them anymore. But if you get out into the wild, and practice those skills, they come back to you.”