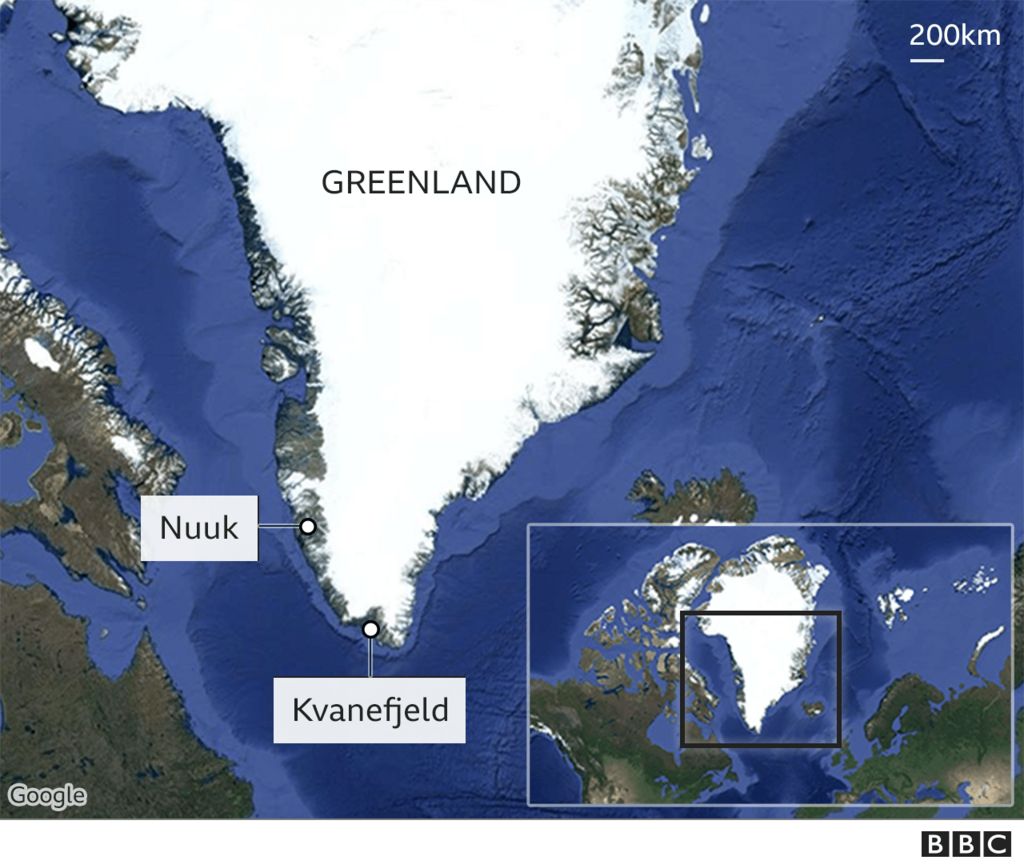 Greenland’s main opposition party has won an election which could have major consequences for international interests in the Arctic.

The left-wing Inuit Ataqatigiit, which opposes a mining project in the south of Greenland, secured 37% of votes.

The social-democratic Siumut party came second, having been in power for all but four years since 1979.

The result raises questions over the future of the Kvanefjeld mine, home to major deposits of rare minerals.

Inuit Ataqatigiit, an indigenous party with a strong environmental focus, will now seek to form a government.

Greenland is a vast autonomous arctic territory that belongs to Denmark. Although it has a population of just 56,000, the result of the election has been closely followed internationally.

Greenland’s economy relies on fishing and subsidies from the Danish government, but as a result of melting ice, mining opportunities are increasing.

The company that owns the site at Kvanefjeld, in the south of the country, says the mine has “the potential to become the most significant western world producer of rare earths“, a group of 17 elements used to manufacture electronics and weapons.

However, disagreement over the project led to the collapse of Greenland’s government earlier this year, paving the way for Tuesday’s snap election.

Many locals had raised concerns about the potential for radioactive pollution and toxic waste in the farmland surrounding the proposed mine, and Inuit Ataqatigiit had pledged to block the project.

Conversely, the Siumut Party supported the development, arguing that it would provide hundreds of jobs and generate hundreds of millions of dollars annually over several decades, which could lead to greater independence from Denmark.

The party’s leader, Erik Jensen, told Denmark’s TV 2 he believed the controversy surrounding project was “one of the main reasons” for his party’s defeat.

Why is Greenland important?

Greenland has hit the headlines several times in recent years, with then-President Donald Trump suggesting in 2019 that the US could buy the territory.

Denmark quickly dismissed the idea as “absurd”, but international interest in Greenland’s future has continued.

The Kvanefjeld site is owned by an Australian company, Greenland Minerals, which is in turn backed by a Chinese company.

China already has mining deals with Greenland, while the US – which has a key Cold War-era air base at Thule – has offered millions in aid.

Denmark has itself acknowledged the territory’s importance: in 2019 it placed Greenland at the top of its national security agenda for the first time.

And in March this year, one think tank concluded that the UK, the US, Australia, Canada and New Zealand – known collectively as the Five Eyes – should focus on Greenland to reduce their dependency on China for key mineral supplies.

Mining isn’t Greenland’s only issue, however.

The territory is on the front line of climate change, with scientists reporting record ice loss last year. This in turn has significant implications for low-lying coastal areas around the world.

But it is the retreating ice that has both increased mining opportunities and raised the possibility of new shipping lanes through the Arctic, which could reduce global shipping times.

This changing reality has also increased focus on long-running territorial disputes, with Denmark, Russia and Canada all seeking sovereignty over a vast underwater mountain range near the North Pole known as Lomonosov Ridge.

Russia, meanwhile, has been increasing its economic and military activities in the Arctic, where it has a long coastline, prompting concern from western governments.