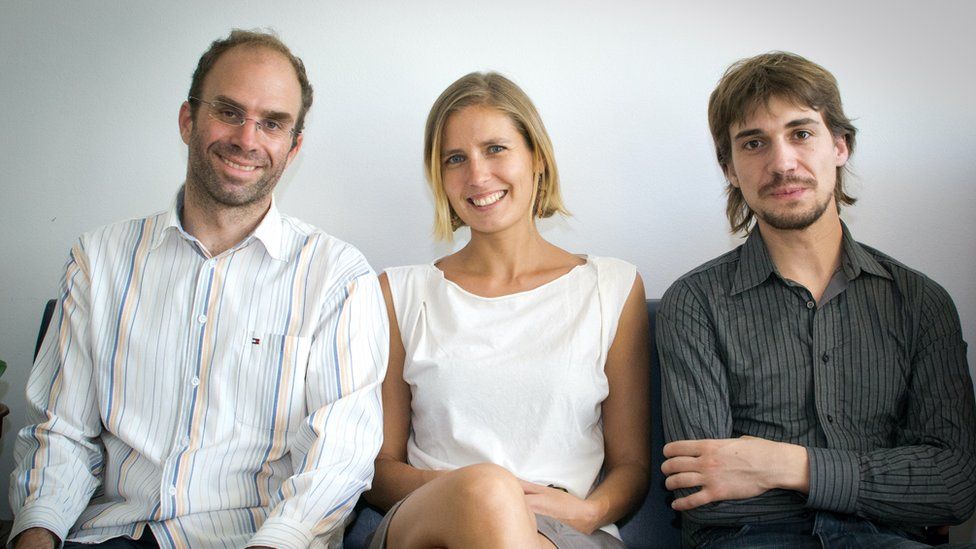 The adventure (or trial) that leads to a new business can sometimes have a peculiar start.

So it was with a chance meeting in 2014 between Marc Güell, Bernhard Pätzold and Veronika Oudova, three competitors in a beach volleyball tournament in Barcelona.

In their downtime between games, the trio got to talking and found one particular subject that chimed with both their personal and professional interests.

“I always had problems with my skin,” says Ms Oudova, who at that time was a market researcher. She described the many years that she had spent cycling through prescription solutions, cosmetics and home remedies.

Bernhard Pätzold, was just finishing his PhD, working on a way to re-programme bacteria to act as “living pills” to repair lung disease. Meanwhile Marc Güell was conducting post-doctoral work in genetic engineering with synthetic biology.

Dr Güell described his fascination with recent reports of the first successful micro bacteria gut transplants, when the “good bacteria” of one person was put into another to cure them of conditions like Clostridium difficile.

“Bernie said, okay, let’s do kind of the same thing – except on the skin. We’ll change the population of the bacteria so it can come back to its natural and healthy state,” says Ms Oudova.

The group wrote their idea down on a piece of paper. That idea would eventually take them on a round-the-world odyssey and lead to the formation of a company, S-Biomedic.

Because their idea was not a discovery in a lab attached to a company or a university, the three founders had to convince the world it would work.

Ms Oudova, who now works as the chief executive officer of the firm, wrote a business plan and submitted it to competitions offering funding for start-ups.

In 2015 they won their first $40,000 backing from startup Chile, a programme run by the government to bring foreign start-ups to Chile in the hopes of encouraging local entrepreneurship.

The three founders were required to match the funding by 10%. They used their personal savings.

In the seven months they lived in Santiago, Mr Pätzold convinced the local university lab to lend them free laboratory space and use of the equipment.

There, they were able to produce preliminary data. They considered staying in Chile to develop and launch a product.

However, supplies and chemicals ordered in South America were more expensive and took ages to arrive.

So, they moved back to Barcelona in search of another laboratory, but were running dangerously low on cash.

Sleeping on friends’ couches, applying for grant after grant, they wondered if it had been right to leave Chile, where they had spent weekends hiking through the Andes.

A grant came through which required them to move to Germany. This time, they worked in a dermatology clinic with lab access.

They befriended a local community of dermatologists and treated their first patients.

The data from these tests earned them their big break. Johnson and Johnson invited them to Belgium to join one of their incubators, where they were given lab space and financial support.

Barcelona ‘has to wait’

“Eventually, we would all like to go back to Barcelona, because that’s where my heart is,” says Ms Oudova, who has remained in Brussels for the last four years.

“But that has to wait. We need to bring S-Biomedic to success,” she says.

The serum will hit pharmacy shelves later this year.

Ms Oudova says if she had known at the start what the early days as a biotech entrepreneur would entail then she might have thought twice – but that on the whole, it’s been exciting.

“If your path is super smooth, then, yeah,” she laughs, “you are not going to learn as fast.”

Adam Perriman, a professor at the School of Cellular and Molecular Medicine at Bristol University, tells his prospective doctorate students not to expect plain sailing if they want to go into business.

To start, a PhD is required but this is only the first step. Then in business, as in science, there is the trial and error.

Prof Perriman should know. He splits his time between being a professor and acting as the chief scientist of his own biotech, Cytoses.

Started in 2017, Cytoseek is a cell therapy for cancer patients that uses synthetic materials to find and kill harmful tumour cells while leaving healthy cells unharmed.

It is a part of Unit DX, at Bristol University – an incubator dedicated to sponsoring and supporting scientific research and development.

Cytoseek is now at the stage of raising investment.

Building his own company has revolutionised how Prof Perriman teaches his PhD programme.

A self-funded PhD student can expect to pay between £3,000 to £6,000 a year for four years, but Prof Perriman says, most bio-sciences doctoral studies come with a scholarship and a stipend.

Twenty years ago these scientists would have chosen career paths that either led straight to a large pharmaceutical company or kept them in academia.

Today, Prof Perriman says, “spin out” culture means that it is easier for PhDs to discover a scientific idea in a lab and form a company that brings those ideas to market.

Dr Uzma Choudry, an early stage biotech investor at Octopus Ventures, emphasises that while spinning businesses out of academia might be more common, it is rarely easy.

“I think often academics don’t realise that once the patent has gone in, it’s only the start of the journey.”

‘It won’t walk itself to market’

Dr Choudry has worked as a research scientist in photochemistry and synthetic biology, but as a venture capitalist, a meeting with her now can mean financial survival for a budding biotech firm.

Venture capitalists put together a pot of money from a group of investors which they then invest into start-up businesses.

The hope is these will grow large enough to either be sold to a larger business or to list publicly, so that the original investment money can be returned with a profit.

Dr Choudry says it is a given that any biotech she invests in should have a proven scientific basis, but just as importantly, it should also possess good business sense.

“The science is not an end in itself, it will not just walk itself into the market,” she says.

That journey can take years. For Veronika Oudova and her colleagues at S-Biomedic, that goal of bringing a product to market is tantalisingly close. Their acne serum is expected to go on sale this year.

When it does, she says, there will be a modest private celebration.

“I guess we’ll open a bottle of bubbles and remember the old good times when we hiked into the Chilean mountains and then the hard times, how we slept on the couches and how we went here and there, and everywhere to make it happen.”