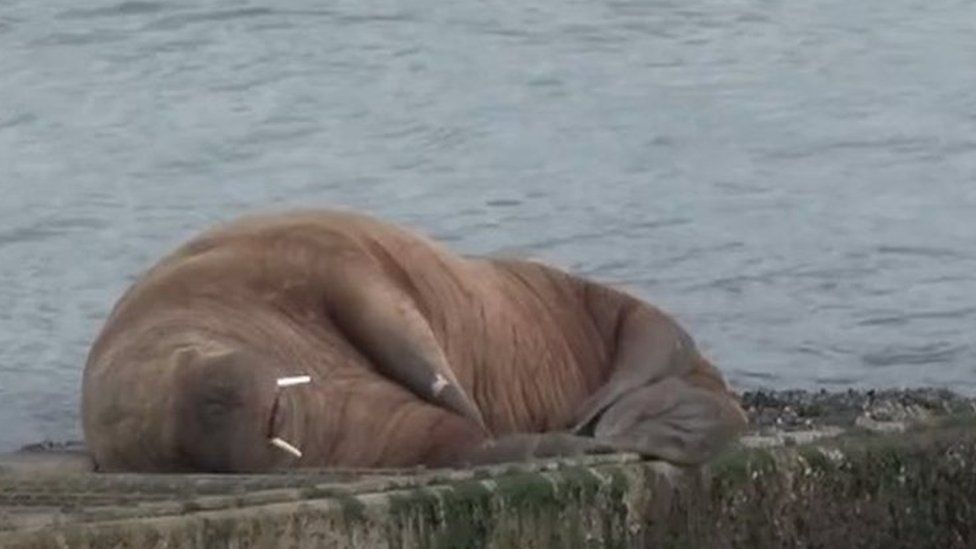 Thousands of miles from home Wally is more used to a quieter life, away from humans, in the Arctic.

But, after straying unusually far south into Tenby, Pembrokeshire, the walrus has become a bit of a tourist attraction for visitors over Easter.

Now authorities are asking them to leave Wally in peace, after reports of jet skiers, surfers and paddle boarders “disturbing” him by getting too close.

Conservation groups have urged people to “enjoy him from a distance”.

They have been keeping a close eye on the mammal, who has been nicknamed Wally ever since he was first spotted on the Welsh cliffs.

The walrus is believed to have arrived from the Arctic on an ice floe, and was initially seen off County Kerry earlier this month, before he ended up on the Welsh coast.

It was first seen in Wales on rocks near Broad Haven South beach before heading to Tenby, and had spent a few days on the RNLI slipway, with lifeboat crews keeping people away from it.

In a statement, authorities warned the public to leave Wally alone, as the sunshine draws crowds to the area.

The walrus is protected under the Wildlife and Countryside Act, 1981, and anyone caught disturbing the animal may be committing a criminal offence.

“We understand it’s exciting and unusual to have the walrus take up a temporary residence in Tenby, and that over the bank holiday weekend many people may wish to visit the area in the hope of catching a glimpse of him,” the statement said. “However, it’s in his best interests to be left alone as much as possible, so we’re asking people to remember he is a wild animal and avoid the temptation to get near to him and disturb him.

“We’re really concerned to hear reports that some people have tried to get close to him by using jet skis or paddle and surf boards – this really isn’t in his best interest and we urge people to act responsibly this weekend and if they find themselves in the area, to enjoy him from a distance.”