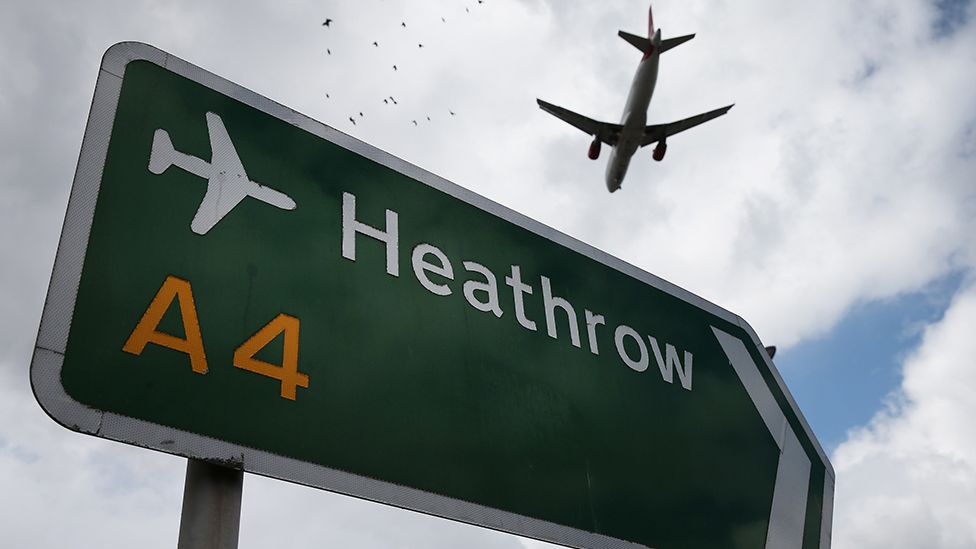 Airports around the UK want to expand and increase flights, despite a government commitment to cut emissions.

Are their plans bad for the environment, and will they interfere with the UK’s ambition to reach net-zero carbon emissions by 2050?

Why do airports want to expand?

Airports are privately run and they want to grow to increase profits.

British airports also employ hundreds of thousands of people, and the owners say a strong aviation sector is vital for the UK’s future as a trading nation. Many pension funds are invested in the industry.

That’s why councillors have approved a new terminal at Leeds Bradford Airport, and a runway extension at Southampton may be agreed later this month.

In total, eight airports round the UK have plans to grow.

Covid restrictions have hit aviation hard, with few people currently flying. But the industry hopes numbers will bounce back.

What are the arguments against?

Flying creates noise and local pollution – and it adds to greenhouse gases that are overheating the planet. British Airways’ CO2 emissions alone were similar to those of all of the UK’s vans put together, says the green group Transenv.

BA doesn’t deny the figure but says it’s committed to reducing its impact.

At the moment flying produces around 6% of the UK’s emissions – but aviation has been allowed merely to stabilise its emissions while other sectors have to cut theirs. So the effects of flying will grow proportionately over time.

Planes also damage the climate in other ways. They emit nitrogen oxide (NOx) gas, a pollutant. They also create contrails – ribbons of cloud that can warm the atmosphere.

Scientists believe the overall effect of non-CO2 emissions at altitude is between two and four times that of the CO2 emissions alone.

What does the government say?

At the moment there is no government plan for reducing aviation emissions overall, although ministers are due to announce a strategy for cutting transport emissions in the coming months.

A major infrastructure project such as the Heathrow third runway will automatically go to a public inquiry, but there’s currently nothing in planning law to stop regional airports expanding.

The Climate Change Committee (CCC) – which advises the government – says if any airport expands, another should contract. However, no airport is volunteering to shrink its operations.

So will regional airport expansion go ahead?

The Leeds Bradford Airport expansion proposal is on the desk of Communities Secretary Robert Jenrick, who must make a decision by 6 April. He may judge that planning permission for regional airports should be dealt with locally because no UK-wide policy is in place.

This was Mr Jenrick’s response to the recent proposal for a coal mine in Cumbria but he later changed his mind, after criticism of the mine from other Cabinet ministers. The issue will now go to a public enquiry.

Would clean fuels make a difference?

The CCC says the only way for aviation to become more eco-friendly would be if planes became much more fuel-efficient, or used low-carbon fuels from plants or waste. However, these will not be available at scale for some time – nor is there any immediate prospect of battery-powered planes.

What’s more, even supposedly clean existing fuels, such as hydrogen, still produce NOx when they’re burned, and the water vapour they emit is a powerful greenhouse gas.

What can you do to reduce emissions from flying?

The simplest answer is not to fly at all. If you need to make a work journey – or can’t bear a summer without guaranteed sunshine – don’t fly business class because the bigger the seats, the fewer the travellers, and the higher the emissions per passenger.

You might buy an offset – that’s a way of calculating your flight emissions and counter-balancing them by, say, having trees planted.

The Aviation Environment Federation (AEF) advises that the most trustworthy offset is through a method called direct air capture (DAC), which uses renewable energy to suck emissions directly from the atmosphere.

However, using DAC for a guilt-free transatlantic flight would put an estimated £240 on to a London-New York return journey, AEF says.

That, it says, is the true environmental cost of flying.

What can firms do?

Finance officers have been delighted to find that executives could do much of their work on Zoom during lockdown, thereby saving a small fortune on business-class seats. This trend looks likely to continue to an extent.

As business-class flying contracts, aviation could shrink overall because the profit from business seats subsidises the cost of economy-class seats.

Tackling frequent-flier programmes (FFPs) would also be effective. At the moment executives clock up air miles every time they fly. They then swap these for leisure flights with their families. So, basically, the more they fly, the more they’re incentivised to fly.

In Germany, air miles are taxed as a benefit in kind. However, environmental campaign group Greenpeace says they are so harmful they should be banned altogether.