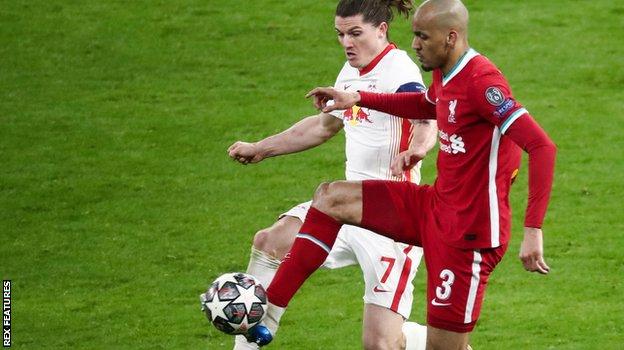 I feel very differently now about Liverpool’s chances of getting past Real Madrid in the Champions League than I did a few weeks ago and there is one reason for that – Fabinho.

It’s no coincidence that since the Brazilian returned to central midfield in mid-March, Liverpool have beaten RB Leipzig, Wolves and Arsenal and have looked far more like their old selves.

It’s not the case that until then Fabinho had not been in the team, or even that he had not been playing well – just that he has spent most of the season playing in central defence because of the injuries the Reds have had in that position.

People have spent the past few months talking about what a huge loss Virgil van Dijk has been at the back since he was sidelined in October, but I doubt even Liverpool boss Jurgen Klopp realised how good Fabinho would be at centre-half – he has shown he is among the best in the Premier League.

Arguably the biggest loss, though, has been not having him in his usual role, shielding the defence.

It is huge to have him back and Klopp is probably wondering where his side would be in the Premier League if he had been there all season. I know a lot of Liverpool fans are.

‘Dyson’ is back – the return of the Reds’ Hoover

It’s been well documented how many different centre-half pairings Liverpool have used this season – it is now 20.

Nat Philips and Ozan Kabak was the 18th combination to be tried, when Phillips came on in the first half of the Merseyside derby in February, and they have become regulars.

In recent weeks they have started looking like an assured partnership, keeping clean sheets together in those last three Liverpool wins, but Fabinho is a big reason for that happening.

Phillips and Kabak played very well against Arsenal on Saturday of course, but a lot of the pressure was off them because the Gunners’ attacks weren’t getting very far.

It was Fabinho who brought them that protection, just like he did before Liverpool’s defensive crisis started.

There is a reason Klopp once compared the 27-year-old to a ‘Dyson’, a brand of vacuum cleaner, and it’s because he is so effective at hoovering up any danger before it gets to his defence.

Fabinho sits at the point of a triangle in front of the two centre-halves, quickly sensing any danger and stopping it developing – whether it’s through his aggression and his tackling, or by him reading the game and stretching out a leg to cut out a pass.

‘Fabinho changes the tempo Liverpool play at too’

As well as his own contribution, Fabinho’s presence allows Thiago a little bit of freedom to be that player in Liverpool’s midfield three who advances up the pitch. That’s a good thing for a number of reasons.

Thiago’s a gifted passer who is willing to work without the ball, it’s just that he tackles like Paul Scholes used to – so very hit and miss.

When he was the deepest player, the opposition were often able to get through to the defence very easily. Now, if you get past Thiago then Fabinho is waiting behind.

So, having Fabinho is better all round for the whole team. Especially when you consider he is good enough on the ball to quickly pass through midfield and directly feed the forward players. He changes the tempo Liverpool play at too.

A few weeks ago, if anyone analysed Liverpool, they would have seen it was easy to open them up. They were so bad because they did not have that protection in front of their defence.

If Real have watched them more recently, though, they will be thinking they’ve changed. They look a different team now, one that is very difficult to break down and create chances against.

It’s not just their results that have improved, their organisation and overall performances have been impressive too.

That all helps to bring back their belief and build confidence and momentum within the team, and with that has come the consistency they’ve been missing for the past few months.

Even before the Arsenal game last weekend, I bet some people were asking, “I wonder which Liverpool will turn up?” With Fabinho back in midfield, however, you don’t have to ask that question anymore.

‘Stopping Benzema will still be a huge test’

There’s been some other positives for Liverpool ahead of the Real tie. Diogo Jota’s return to fitness is a boost too – however Klopp chooses to use him, he gives Liverpool extra firepower in attack.

So, I think Liverpool will be confident they can go to Estadio Alfredo Di Stefano on Tuesday and get a positive result in the first leg of their quarter-final.

I’m not suggesting it will be easy, though. Real are the not the attacking force they were a few years ago, when they had Cristiano Ronaldo and Gareth Bale at their absolute peak, but they will always be dangerous.

It is going to be fascinating to see how Liverpool deal with Karim Benzema, who will be up against two young and inexperienced defenders in Phillips and Kabak. Will they be able to handle him?

I don’t think they will fear him, because they come up against Mohamed Salah, Roberto Firmino and Sadio Mane every day in training. They know they are capable of dealing with forwards of that calibre.

The difference this time is that they will be doing it on a global stage, and against a striker who they don’t know inside out.

They won’t know Benzema’s little feints and movements and stopping him is going to be a huge test for them, even with Fabinho to help them out.