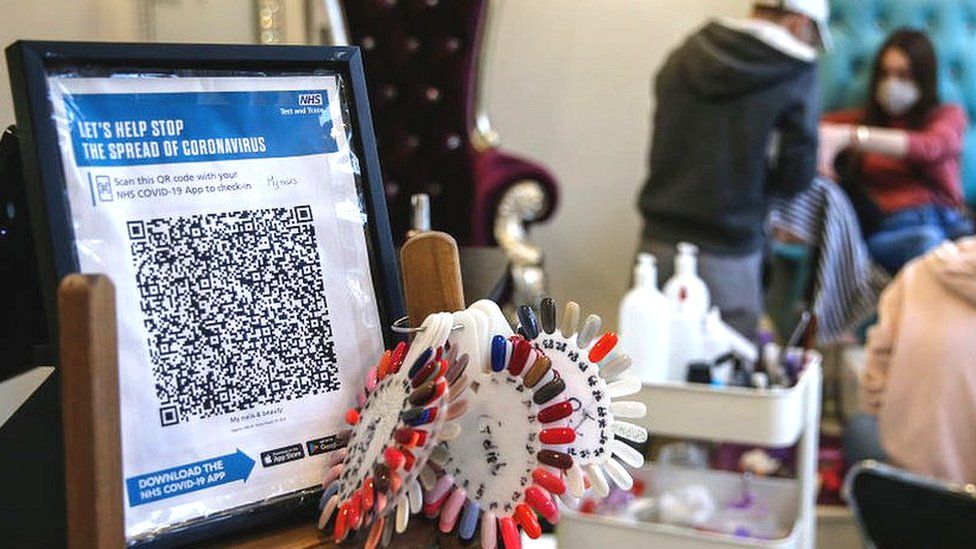 England and Wales’ contact tracing app will soon ask users to share details of venues they have checked in to, if they test positive for the coronavirus.

The update to the NHS Covid-19 app will be deployed ahead of shops reopening in both nations on 12 April, as well as outdoor hospitality in England.

The authorities will be able to use the information to tell other visitors if they need to be tested for the virus.

But the system has been designed to protect users’ anonymity.

“The app has been designed with user privacy in mind, so it tracks the virus not people, and uses the latest in data security technology to protect privacy,” said a spokeswoman for the Department of Health and Social Care.

Until now, the QR barcode-scanning facility only came into use if local authorities themselves flagged a location as being a virus hotspot by other means.

This would then trigger a process whereby each phone could check if it had been at one of the affected venues on the dates concerned, and send the owner an alert.

But the facility has rarely been used, despite more than 106 million check-ins.

In March, Sky News reported that “capacity issues at a local level” were blamed for this, with overburdened health protection teams unclear about what they were supposed to do.

The decision to automate the system via users’ own actions could help address this.

People might have reservations about disclosing where they have been and when.

To address this, the Department of Health has said a “privacy-protecting” approach is being taken.

The app will only share venue history data if users opt in.

And rather than any names or other personal details being disclosed, the software will simply inform the system when an infected user had visited the locations.

Depending on the thresholds set – for example how many infected users visited the same place on the same day – other app users can then be told to either monitor their symptoms or immediately get a test, whether they feel ill or not.

It is not intended that the check-in tool be used alone to force others to self-isolate.

“People shouldn’t be worried about this as effectively they aren’t being asked where they were, but rather where an unidentified person testing positive with Covid was,” commented Prof Alan Woodward, a security expert from the University of Surrey.

Further details will be revealed in a forthcoming revision to the app’s data protection impact assessment (DPIA) document.

Privacy advocates have, however, raised concerns about a parallel system being run in Scotland.

Users there are being asked to use a new app – Check In Scotland – to register at venues.

It is separate to the Protect Scotland contact-tracing app, and thus not bound to the same privacy-preserving measures demanded by Google and Apple, which provide some of the technology involved.

Check In Scotland uploads the name, email address and mobile phone number of each user to a “secure” centralised database along with the time of their visit to each venue.

Users are told the data should only be used to try to combat the virus.

But the DPIA acknowledges that the information could, in theory, be disclosed for other purposes if demanded via a court order or ministerial direction.

Some experts are concerned this leaves the door open to it being “misused”.

“The concern is that this infrastructure, once in place, is unlikely to go away because the coronavirus will be with us for a long time,” said Prof Michael Veale, a lecturer in digital rights at University College London.