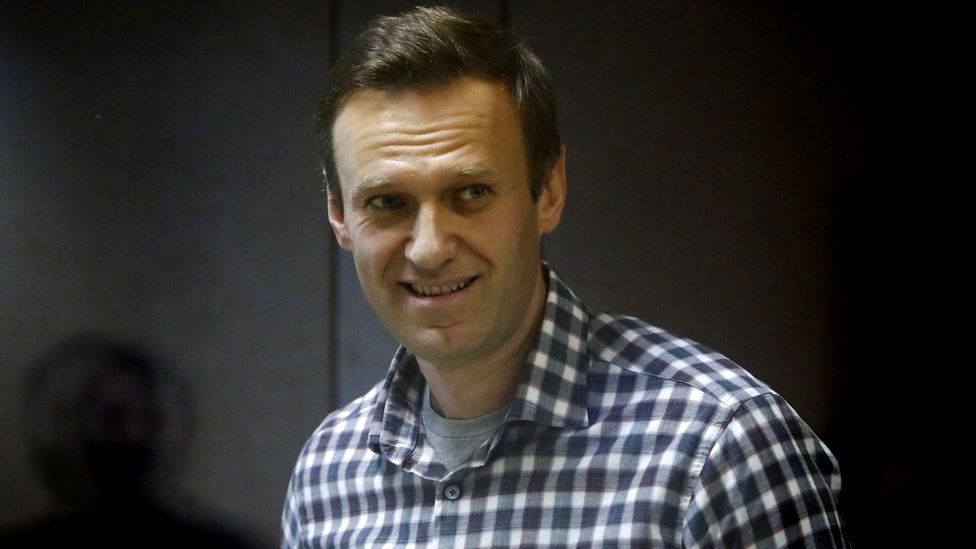 Jailed Kremlin critic Alexei Navalny has said he has a persistent cough and temperature, and that there have been cases of tuberculosis in his prison.

Meanwhile, the pro-Kremlin newspaper Izvestiya said the 44 year old had been transferred to a medical unit with symptoms of a respiratory illness.

Navalny’s lawyer said he was “in a bad way” and had lost a lot of weight. He declared a hunger strike last week.

He is being held at a penal colony to serve out a sentence for embezzlement.

The 2014 suspended sentence was turned into an actual prison term after he returned from Germany, where he had received medical treatment for nerve agent poisoning.

The conviction was widely seen as politically motivated.

Supporters of Navalny say they are planning to hold a protest at the colony on Tuesday.

In an Instagram post (in Russian), the 44-year-old opposition leader said that as many as three people from his unit had been taken to hospital with tuberculosis recently. He said he had a persistent cough and a temperature of 38.1 degrees Celsius (100.6 degrees Fahrenheit).

“If I have tuberculosis, then maybe it’ll chase out the pain in my back and numbness in my legs. That’d be nice,” he quipped.

But he added that he would be continuing his hunger strike, started last week to demand proper treatment for acute back and leg pain.

The report by Izvestia cited a statement by Russia’s prison service, saying Navalny had received various tests, including for coronavirus.

It said his symptoms included a high temperature and that he was being supervised by doctors. However, the statement denied that there was tuberculosis at the colony.

Navalny’s lawyers have been visiting him in custody and helping him to post messages on social media. They say there are no doctors at the colony and the medical unit on site is run by a single paramedic.

One of them, Olga Mikhailova, told the independent TV channel Dozhd that Navalny had lost 13kg (28lbs) since he arrived at the prison, including 8kg lost before he started his hunger strike.

She said the authorities were not helping the situation.

“He is completely in the power of the prison service…,” she said. “Every day there are very serious deteriorations.

“It’s very difficult to understand why this is happening. The prison service is not reacting to a single complaint of ours… There’s been complete silence from them in the month since his health got worse.”

It said he had “all the necessary medical assistance in accordance with his medical indications”.

“There is a real prospect that #Russia is subjecting him to a slow death. He must be granted immediate access to a medical doctor he trusts and he must be freed,” Agnes Callamard wrote on Twitter.

Last week, however, Navalny was visited by Maria Butina, a woman who spent 18 months in custody in the US for working as an unregistered Russian agent there.

In video footage released by Russian state media, she is seen haranguing the politician and describing the prison as better than a hotel.

The BBC’s Sarah Rainsford in Moscow says the footage is a clear and co-ordinated attempt by the authorities to discredit Navalny, suggesting that he is lying about the state of his health and is far from a victim of political persecution.